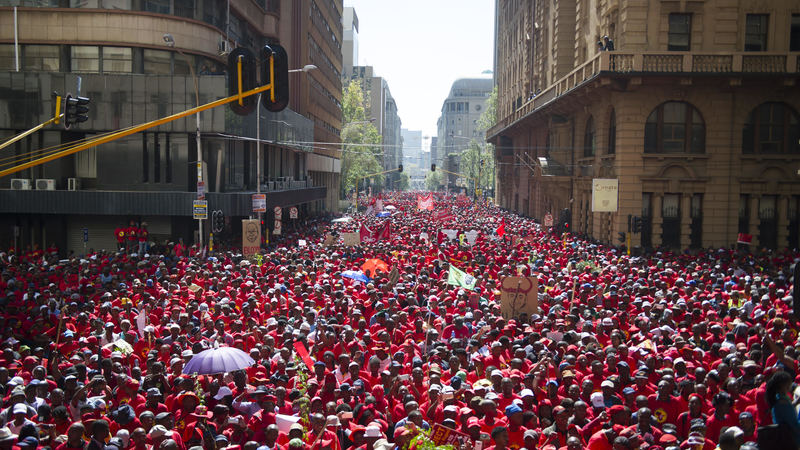 It would be painfully regrettable to watch a golden opportunity slip away, an opportunity that beckons with the promise of fruitful rewards. South Africans have the opportunity to capitalise on Ramaphosa’s ‘new dawn’ and build on it. The time has come for relentless revolution.

These are the golden years which must be used to create a united revolutionary culture with maximum participation. Failure to do so would result in the exacerbation of dark and terrible despair; this is a direction we dare not head in.

The apartheid legacy continues to hold our people in a tyrannical grip and coupled with this we see the intensification of globalised capitalism. For this reason our people need to act without delay.

Capitalist tyrannies hold working-class employees in subjection via corporation shareholders and employers. Desperation for land has become so drastic that the government found itself powerless to stop illegal land occupation across the country, while joblessness remains prevalent.

According to a Mail and Guardian article entitled “Funding focus should be lower-cost urban housing” (published in May 2018), the South African housing backlog increased to 2 million. According to the same article, the amount of households in informal settlements doubled. Between 1996 and 2015 they increased from 800 000 to 1600 000. It’s interesting therefore to consider that although 1996 was supposed to be a landmark for liberation as it was the year our constitution was adopted, since then living conditions have evidently been on a downward slope.

The World Bank released a report comparing 149 countries. The report claimed that in terms of inequality we rank the highest, with more than half of South Africans living on no more than R992,00 per month. The same report stated that 1% of South Africans own 70.9% of the country’s wealth. Corruption perpetuating poverty became a major concern and homelessness, hunger and violence are the order of the day.

To the detriment of our people, our working-class movement is in a state of crisis. It is fragmented as division has set in. Counter-productive divisions extend to trade unions not linking their struggles to community-based struggles which tend very much to be the same struggles as theirs, for obvious reasons. In relation to this, people have acquired a culture of reluctance to involve themselves with trade unions.

Trade union federation SAFTU is trying to rectify divisions by uniting the working-class struggle. Something historic and ground-breaking took place in Gauteng on 21-22 July 2018. This was a working-class summit organised by SAFTU, at which more than 147 trade unions and civil society movements came together to unite work-place and community-based struggles. This marked the way forward for the unified combating of the broad apartheid legacy. This was most significant, as community-based struggles have tended to be localised instead of consolidating to form broad-based national revolutions, or ultimately one national-based revolution. Commissions were formed among the summit delegates to address issues relevant to the plight of our people. The main issues identified were poverty, the economy, employment, inequality and corruption.

The various stake-holders of our revolution need to follow through regarding the outcome of this ground-breaking summit. The truth of the sentiment behind this statement is clear as it is echoed by prominent stake-holders in our revolutionary and academic spheres. General Secretary of prominent shack dwellers movement Abahlali baseMjondolo, says “We need to see more working-class summits like the one we saw in July. It is essential for the liberation of our people”. Such is his adamance that he even appears to have hopes that a concerted effort for working-class unity will result in the formation of a working-class party for the replacement of the ANC at the helm. He says “We need a workers’ party to replace the current ruling party, a party that exercises full accountability for the people on the ground. People on the ground must be the ones who appoint people to government positions and who recall people in government.” Additionally, “It is very necessary for people to stop donating their votes to the ANC”.

Dr John Reynolds of the Institute of Social and Economic Research (ISER) at Rhodes University says “Given the intensification of globalised capitalism, fragmentation among working-class organisations is ill affordable”. Additionally, “The quest on the part of SAFTU to unify the labour movement and the working-class more broadly, requires active listening to other community-based voices. Their quest is necessary for the success of the working-class struggle.”

Regarding union factionalism COSATU spokesman Sizwe Pamla says “the divisions are an unfortunate disadvantage regarding the struggle of the workers. They work to the benefit of employers.” SAFTU spokesman Patrick Craven says “SAFTU recently hosted a working-class summit which involved representatives of communities, NGOs and a wide range of stake-holders. This is particularly important given the very high levels of unemployment and the fact that one economist estimated that there are more adult South Africans unemployed then there are employed.” Additionally, “SAFTU is concerned at the fragmentation among trade unions, particularly in the light of the fact that only 24% of workers are unionised”.

If only 24% of workers are unionised it poses drastic concern for the viability of a revolution. We need to see a culture of unionisation spreading across our communities for the sake of our united revolution being on the necessary scale – a culture that is free of any form of intimidation whatsoever.

The reasons for lack of participation in and division of unions are partly understandable and include opinions of corruption. Regarding the decline in union popularity which has led to a lack of unionisation, John Reynolds says “The decrease in popularity stems from rivalry related factionalism and corruption, which has spread from the ruling party to allied unions”. It would appear that strong feelings concerning corruption are not just responsible for lack of unionisation but also union factionalism. Although Patrick Craven expressed his keenness for working-class unity he says “Unfortunately however, some of the divisions within the trade unions concern serious allegations of corruption and theft of members’ money”. Besides opinions of corruption having spread from the ANC to COSATU (they are after all in an alliance), it seems logical regarding reasons for division that a revolutionary movement would be sceptical of doing business with another one that is aligned to the very organisation (the ruling ANC) that the revolution is opposed to. Indeed the ANC, COSATU and SACP alliance naturally comes across as an obstacle to the struggle for liberation.

Without a united mass struggle with maximum participation, the future appears somewhat bleak. Emotions may be running high because of expectations of expropriation of land without compensation, however land reform is not enough. For Ramaphosa’s ‘new dawn’ to be worth its salt, we need to make use of the one advantage our dispensation does have, a constitution that provides for revolution influencing/affecting decision-making and thereby facilitating the winds of change.