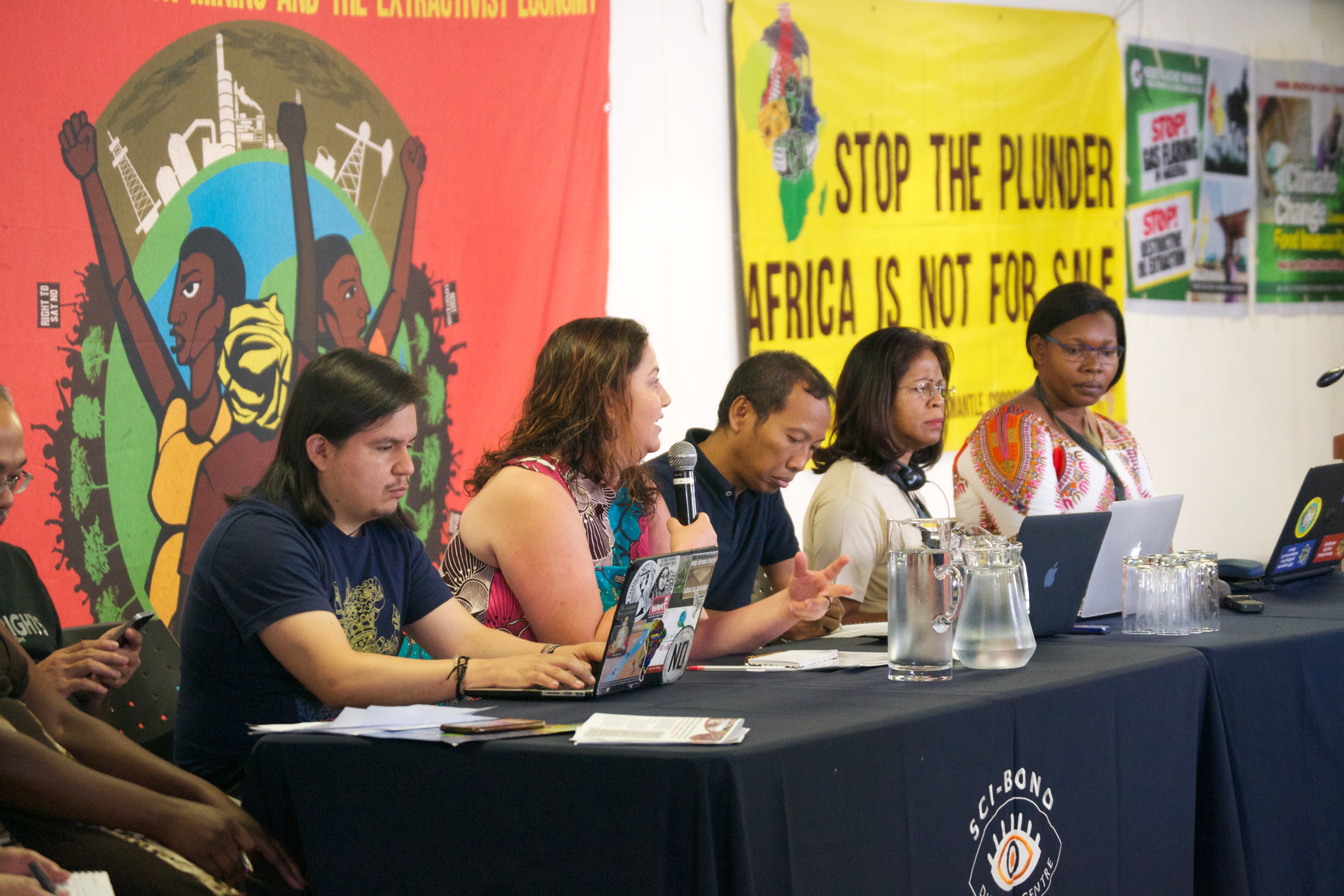 BEYOND EXTRACTIVISM:
RECLAIMING PEOPLES POWER, OUR RIGHT TO SAY NO!

We, the participants of the Thematic Social Forum on Mining and Extractivist Economy, are gathered in Johannesburg, South Africa to consolidate a broad movement of resistance, to build common struggles for solidarity, to guarantee the integrity of nature and to ensure a better world for present and future generations. We come from mining-affected communities, trade unions, people’s organizations, the women’s movement, LGBTI people, faith-based groups, indigenous peoples, workers, small scale farmers, fisherfolk, youth, support groups and academics from 60 countries, including from 28 African countries, as well as from the Americas, Asia Pacific and Europe. We celebrate our diversity, recognising our different perspectives and the alternatives that we offer, but understanding that we are bound together by our desire for a future free from the destructive effects of extractivism. Extractivism is a destructive model based on the exploitation of so-called “natural resources” and people of which mining is a prime case.

Over the last decades, we have seen the intensification of this racist, patriarchal and colonial model, based on the fantasy of the possibility of endless economic growth on a limited planet. It is rapidly undermining the conditions that make life possible on earth. In the name of progress and development, it has been devastating and degrading. It has involved the super-exploitation of workers, the systematic dispossession of communities, intensifying conditions of global warming and climate injustice. It subjects local economies to a logic of wealth accumulation that benefits transnational corporations – the new rulers of the world.

As if this was not tragic enough the rise of fascist forces and old and new authoritarianism, are threatening to unleash new waves of violence and repression. Their driving logic is to exploit the crisis through the deepening of the assault of nature, opening up new frontiers for further commodification and financialisation. Oceans, rivers, forests, entire ecosystems are set to be put at the service of profit making. Accompanying this process of recolonization and the scramble to control scarce strategic resources by competing global and regional powers, lies the spectre of new genocidal wars, which will see the extermination of the ‘excluded’ and marginalised.

Peasants, small-scale farmers, migrants, refugees, pastoralists, displaced persons, indigenous and working class women are enslaved by this extractivist patriarchal development model. They work hard to guarantee the survival of family and community under increasingly precarious conditions. Their labour of care, subsistence production, social reproduction and the recreation of fragile threatened ecosystems is invisible, unrecognised and undervalued. Their labour subsidises capital’s profits and serves the interests of patriarchy.
Furthermore, extractivism is leading to the undermining of workers’ rights – where they exist. Health and safety regulations are systematically violated, workers are informalised and wages are being driven down. Militant trade unionism is attacked and only compliant unions are permitted. The so-called fourth industrial revolution of high tech, big data and artificial intelligence, represents another form of extractivism posing a great threat to decent work.

We, especially peasant, small-scale farmer communities, indigenous people and others across the world, are currently resisting this systematic attack on our territories that, through displacement, deforestation and the destruction of water sources, threaten to destroy our way of life. Women play a particularly important role in these struggles. Women are demanding the right to say no!

This claim to the right to say NO to extractive activities in our territories, is at the same time a clear YES. YES to other alternative ways of living in harmony with the rest of the web of life. YES to the right to decide how to live our own lives. YES to the recognition that nature cannot be conceived as a collection of so-called resources to be exploited at will in the search of (maximising) profit. YES to valuing the work of subsistence and care over economic growth and profit. YES to production for use and not exchange. YES to valuing of indigenous identity, knowledge and perspectives. YES to a new sustainable economic order, sensitive to social and environmental justice.

And YES, to reparations of the historical, ecological and social debt owed to the peoples of the South and which has gained new relevance through the concept of the climate debt. We actively support the ongoing Global Campaign to Reclaim Peoples Sovereignty, Dismantle Corporate Power and Stop Impunity. Corporate privilege and power, institutionalised through investment and trade agreements, must be abolished. Therefore, the ongoing negotiations at the United Nations for an internationally legally binding treaty for corporations with regards to human rights and other national and regional initiatives, are particularly critical and the process should be accelerated. 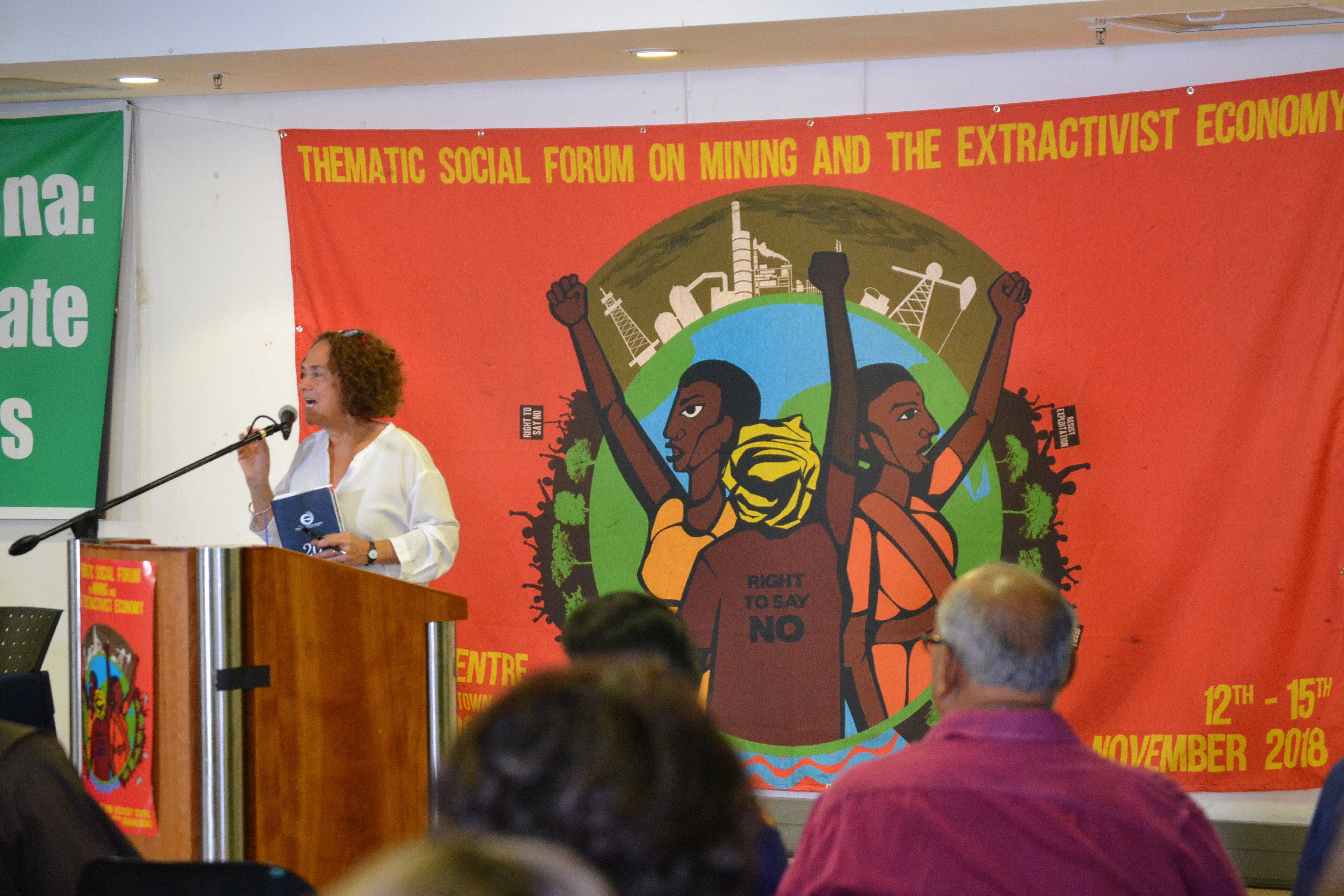 Criminalisation & Militarization of our Territories

Communities resisting destructive extractive projects are divided through corruption and false development promises, and deprived of social goods and public services to force their submission.  Community activists are increasingly criminalized, threatened, abducted, assaulted and murdered. When this State and corporate sponsored violence is against women who dissent, it often takes a sexualised form. Even youth and children are targeted. Communities refusing to consent to mining and other extractivist projects, and militant trade unions are attacked by the combined forces of the state and corporations. Generally, the space for resistance is deeply threatened and being closed down.

The planetary emergency rising from centuries of capitalist extractivism requires a deep transformation not just of our energy systems but of how we produce, consume and organise our lives. A ‘just transition’ from the current fossil fuel and extractive based regime is not just necessary to confront the climate crisis but contains the embryo of a new, democratic, eco-feminist, post-capitalist order. It is a myth that stopping climate change and shutting down the polluting extractive industries increases unemployment. On the contrary, decent livelihoods and work can flourish in building the socially owned renewable energy industries, agro-ecological food systems, land and ecosystems restoration, community health and social housing that underpin the just transition.

Just transitions are already alive in the resistances of women to their way of life, of communities resisting mining and nurturing their food systems, and of workers fighting insecurity and privatisation. A just transition should be based on industrial conversion where workers in polluting industries would retrain to do socially and ecologically necessary work. Workers (and individuals) unable to transition to these new livelihoods would be guaranteed an income and essential public services, paid through redirecting existing state subsidies of the extractives industry, by halting illicit financial flows and by taxing transnational corporations and the rich.

Central to the struggles for alternatives is the right to say NO. We say NO to this model of extractivism and converge on the position that all remaining coal, gas and oil reserves must remain underground; circular economies in which minerals and metals are recycled and brought back into production must characterise a sustainable future; moving into new frontiers of extractivism, such as deep sea mining, is a false solution; the excessive consumption of all in the global north and south must be curbed, based on the principles of sufficiency. Productivism, endless growth and accumulation for accumulation’s sake must be reversed. As it was said during the Forum: ‘We do not live to produce but we produce to live’.

The co-option of traditional leaders to facilitate the penetration of extractivism into our territories is rapidly undermining the legitimacy of these structures and calls for the renewal of popular democracy at all levels especially at local community level. Local initiatives are the foundation for building the necessary counter power needed to challenge the system. In this regard we are convinced of the need for the expansion of the commons. Nature, climate, water, resources and all forms of life are not on sale! They are the commons that we have to protect and share with all peoples and future generations. The right to the commons and respecting its preservation is an ethical imperative and the guarantee for peace and social justice.

In this regard, we are inspired by the perspectives of many of our peoples, indigenous groups and communities who affirm the rights of nature and understand that nature is not a property: Every ecosystem has the right to live and flourish, ‘water has the right to flow and birds to drink and fly’. Rivers and land are rights-bearing entities, and we need to recognize their sacredness. The convergences and solidarities forged in this Thematic Social Forum provide the inspiration for our collective campaigns, actions, new global alliances and assemblies of the peoples which will guarantee our common future.