What will it take to fix our municipalities? 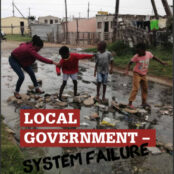 What will it take to fix our municipalities?

Yesterday, we launched the 78th issue of Amandla magazine that focuses on the local government. Amandla Collective’s Shaeera Kalla was in conversation with Issue #78 contributor Ayabonga Cawe.

We are in the middle of what some call the ‘silly season’, while the poor are plunging deeper into the abyss of poverty due to the high unemployment rate and severe joblessness aggravated by the Covid-19 pandemic, politicians are out in full force waxing lyrical about what they plan to do in addressing this calamity as they campaign for the upcoming local government elections. These are empty promises poor communities receive every five years when politicians are on the campaign trail. Very little has changed since the dawn of democracy but every five years brings a glimpse of hope to some neglected and excluded communities as they believe things will change for the better once they vote. In this special issue of Amandla, we featured a different crop of leaders. Community leaders who have been active in our communities for years, campaigning for decent housing, land, affordable basic services, jobs and against corruption have decided to come together to campaign in this year’s local government election under a common banner – the Cry of the Xcluded. They are not politicians but activists. They affirm that their campaign is not only about the crisis of local government or for the delivery of better services, but for a SOCIALIST South Africa where the enormous wealth of this country would be freed from the greed of the few and be used to ensure that everyone has a decent life, a life of dignity. Also in this issue, Ayabonga Cawe delves deeper into municipal dysfunction and how it negatively impacts economic production. Poor service delivery does not only affect households but some municipalities are also losing investors as factories are closing down and moving production to towns with better infrastructure and this has a negative impact on job-creation efforts and poverty alleviation. Cawe states that no industrialist will locate themselves in an area without roads for example. Lastly, we also looked at water scarcity in Eastern Cape and Gauteng. Our constitution states that everyone has the right to clean water and basic sanitation and Chapter 4 of the National Development Plan envisages a South Africa that recognises the importance of secure and equitable access to water and sanitation as catalysts for socio-economic development. But for communities like Lurholweni township, in the Amadiba administrative area in Mbizana, Eastern Cape this is nothing but a pipe dream as their taps run dry. Twenty years later, there is no free basic water in Lurholweni. Water provision is private, via the informal economy.

You can also listen via one of the streaming services below:
Apple Podcasts
Google Podcasts
Spotify