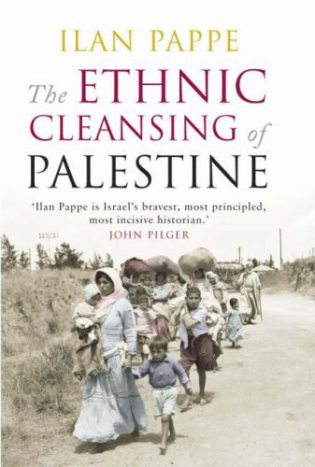 Pappé was interviewed by Alejandra Ríos for Left Voice, where this article first appeared.
———————————————-

Alejandra Ríos (AR): You’ve talked and written about the concept of homeland as justification for destroying the native population. What is the meaning of this concept and what are some examples of its use in other places? In what sense is it applied differently in Palestine than in other countries?

Ilan Pappé (IP): The context is the phenomenon of settler colonialism: the movement of Europeans, because they felt unsafe or endangered, into on-European areas in the Americas, Africa, Australia and Palestine. These people were not only seeking a new home, but also a new homeland. Namely, they had no wish or plan to come back to Europe.

The only problem was that the lands they coveted were already inhabited by other people. In most cases, their solution was the genocide of indigenous people. In two cases, the solution was different: apartheid in South Africa and ethnic cleansing in Palestine.

Ilan Pappé is a historian, socialist activist, professor at the University of Exeter, and supporter of the Campaign for Boycott, Divestment, and Sanctions (BDS). Of Israeli origin, he is a world-renowned scholar on the Palestinian-Israeli conflict and has written numerous books on the subject, including The Ethnic Cleansing of Palestine and The Idea of Israel: A History of Power and Knowledge.

The Bullet is produced by the Socialist Project. Readers are encouraged to distribute widely. Comments, criticisms and suggestions are welcome. Write to info@socialistproject.ca