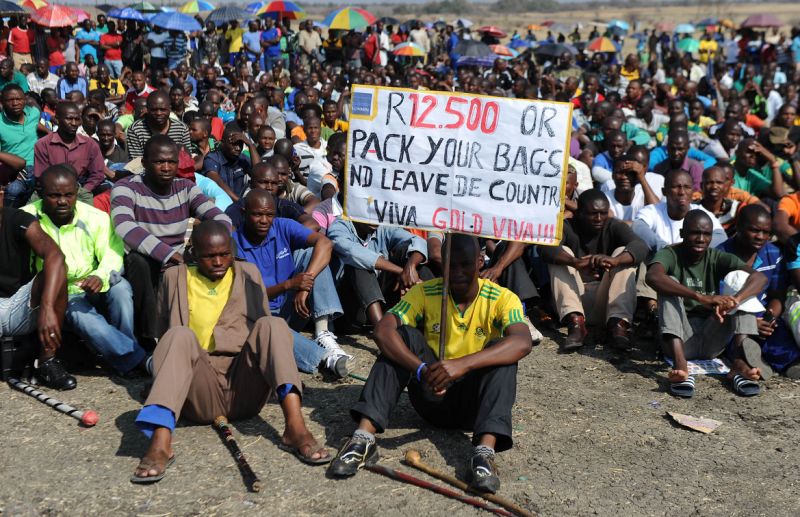 No doubt, workers across the world were shocked as striking mine workers at the South African town of Marikana were shot to death during their strike for higher wages in 2012 at Lonmin Plc, the third largest platinum mining company in the world. Thirty four workers were massacred by police on 16 August. Ten had already been killed in the days before. Most of them when a police General ordered tear gas and shock grenades against a peaceful march. Among the ten were also two police officers and a security guard.

The Marikana death toll is in fact above 50 today, due to suicides in directly affected families. As for injured and traumatised workers and family members, they can be counted in hundreds.

To workers in South Africa, also outside mining, the ‘R12500’ became a symbol for having a life. In the eyes of established South Africa, however, the mine workers were ignorant of the realities in the mining industry. The workers effectively demanded an increase of the basic wage by 150 percent! This was considered outrageous and completely utopian.

‘Wage evasion’ as one deadly factor

In 2014, the power of the Marikana Commission of Inquiry (MCI) gave two researchers from AIDC access to the financial statements of Lonmin’s subsidiaries in South Africa. One question was, if the R12,500 demand was at all ‘affordable’, because Lonmin had refused to negotiate. This was a small part of the Commission’s task to give a background to the catastrophe.

The financials of daughter companies are confidential. Only the annual reports of a mother company that sell its shares on the stock market are public. This is the legal situation in South Africa, and in most countries.

Still, it is the local subsidiaries that pay taxes to the government and wages to the workers. As a rule, they employ the whole productive workforce. Lonmin Plc is based in Britain. In 2012 it employed some 50 managers. Lonmin’s largest South African subsidiary Western Platinum Ltd (WPL) employed 25,000 of Lonmin’s workers in 2012 (with another 3000 employed by the subsidiary Eastern PL).

The confidential financial statements showed that WPL every year had transferred an average R245 million in ‘sales commission’ to a letter box company in Bermuda. But there was no one in Bermuda selling anything. The company receiving these millions had the exact same address as Appleby Services – the law firm at the heart of the Paradise Papers.

When this went public, Lonmin argued that the transfers were shifted to its South African head office affiliate Lonmin Mining Services (LMS) in 2008. The audited financial statements of WPL showed however that the transfers to Bermuda continued right up until 2012.

If the R245 million sent to Bermuda were divided by 4000, the number of RDO workers, this alone covered a wage increase of about 100 percent, or R5000 per month.

Another R200 million per year was sent from WPL to LMS in ‘management fees’. This helped to pay huge salaries to forty managers. From 2010-2012, they also received share based payments bonuses, costing WPL R100 million per year. That alone corresponded to an additional R2000 wage increase per RDO worker. On top of this, a net payment of R758 million was made from WPL to London in 2006. Lonmin Plc sold a South African mine to its own subsidiary WPL. This selling of a mine to oneself, as it were, was advantageous because of the double tax agreement with South Africa. Lonmin does not pay taxes in the UK, only in South Africa.

For public sector workers, corporate tax dodging represents a threat not just to their labour conditions and livelihoods but to the essential services they deliver to their communities every day. The public sector is financed by taxes. Their unions should be campaigning against both legal tax avoidance and illegal tax evasion.

For private sector workers, the issue can seem more abstract. Still, profit shifting moves much more money away from them than from governments. If the tax on profit is 28 percent in a country, a transnational corporation (TNC) has to move $100 million to a secret and zero tax jurisdiction (a ‘tax haven’) if it wants to evade a tax expense of $28 million. Thus, the government lost $28 million. But who lost the remaining $72 million that also went off shore?

You will look very long look to find activists, academics or government officials to even ask this question. Profit shifting is posed as a problem for indebted governments, struggling to deliver quality public services and investment. That general tax payers must pick up the bill when the tax base is eroded can also be mentioned. The MCI went further, to social investments. It pointed to Lonmin’s profit shifting when asking why Lonmin had built only three (3) mine worker houses over five years, when it was legally obliged to hold a promise to build 5500. But if rock drill wages could be much higher, was something that could not be asked, as it were.

It is the unions that have to bring the perspective of wage earners to the table, explaining that profits pumped offshore are a key factor in keeping all our wages low.

The Organisation for Economic Coordination and Development (OECD) has, for decades, been setting the agenda for economic policy issues, and led the international project to crack down on tax havens, transfer mispricing and corporate profit shifting. Yet for over twenty years the amount sitting offshore has skyrocketed.

In 2015 the OECD launched a new programme called the Base Erosion Profit Shifting (BEPS) project.

‘BEPS affects everyone. It harms governments because it reduces their tax revenues and raises the cost of ensuring compliance. It harms people because, when some MNEs pay low or no tax, individual taxpayers must shoulder a greater share of the tax burden. And finally it harms businesses themselves’.

In the dominant discourse, that covers ‘everyone’. Business is harmed, OECD argues because BEPS gives TNCs a ‘bad reputation’, and it gives domestic companies without offshore bank accounts a competitive disadvantage.

As usual, the OECD project only examines the size of tax losses. But OECD’s numbers also indicates how much workers are losing in potential wages. The BEPS policy brief states that tax ‘revenue losses from BEPS are conservatively estimated between $100 Billion and $240 billion annually’.

If we consider that this only represents the missing tax amount, we realise that the problem is at least five times bigger. It depends on the effective corporate tax rate in the country. At an average effective corporate tax rate of around 22 percent, $100 Billion in tax revenue loss means a total of $454 Billion pumped off shore. Using OECD’s higher, albeit ‘conservative’, estimate, $240 Billion in evaded corporate tax means $1090 Billion or over a trillion dollars in profits shifted out of sight every year.

That is enough to give more than a $300 end of year bonus to every single worker on earth.

This is clearly not only a tax issue. If this flow of profits could be stopped from flooding offshore, the money could be more widely redistributed. Part of the money no longer profit-shifted would go to the government. A much larger part could go to ordinary households in the form of significantly higher wages.

But who would be the agent of such a change? The key lesson from ‘The Bermuda Connection’ was that unions who organise workers in TNCs must demand access to the financials of the corporation’s subsidiaries. As a rule they are the formal employer. This is where tax planning takes place and where BEPS practices makes excess profits invisible to union organisers, significantly weakening their hand in wage bargaining.

Both public and private sector unions would massively benefit if profit shifting is brought to an end. Public services could be improved and extended, making nurses, teachers and firefighters lives easier and their wages higher. If the veils of secrecy are lifted, the private unions could enter negotiations with a truer picture of the company’s structure and economy. Wage demands described as irresponsible or outrageous would suddenly appear as perfectly reasonable when the missing millions are brought back into the picture.

Public and private sector unions that work together can stop this wage theft. Public sector unions should have the tax expertise and alliances. Private sector unions have a direct interest in finding to where the employer is sending excess profits. When unions expose such cases we would boost the fight to once and for all fix the broken tax rules.

Unions can win by strengthening involvement at the company level, demanding to see the books of the TNC’s subsidiaries. Unions can call for an end to cross border payments of ‘sales commissions’, ‘management fees’ to offshore letter box companies. Dodgy corporate tax structures should be disclosed to rally the general public.

Recent advances such as mandatory country by country reporting of tax payments give a better idea of where companies make their profits and where they are taxed. If they are public, they can be used for the benefit of union members. Furthermore, all unions need to increase their capacity to analyse the opaque world of corporate financial statements. ‘Tax planning analysis’ should be a part of our mainstream research. and be confident in our ability to call out corporate tax dodgers.

Currently, governments replace missing corporate tax revenues by higher taxes on wages and on consumption, such as VAT. Union members are picking up the bill for corporate tax greed. As for VAT it affects even the poorest of the poor.

When wages are stagnating across the world, recapturing these shifted profits is an obvious way to both bolster working class households and provide the means to boost local economic development and public services.

The Lonmin RDOs were told that their demands were outrageous. When the books of all Lonmin’s companies were opened, this was revealed as untrue. Unions ignore this lesson at our own cost. Public and private sector unions must step forward. The space for higher wages for all workers is huge. Unions can claim this space and together we can win.

Dick Forslund is senior economist and researcher at the Alternative Information and Development Centre (AIDC) in Cape Town. He is a Swedish national and holds a PhD in Business Administration and a BSc in Economics from the Stockholm University School of Business.