The Working Class Summit: a step towards united, militant action

The Working Class Summit: a step towards united, militant action 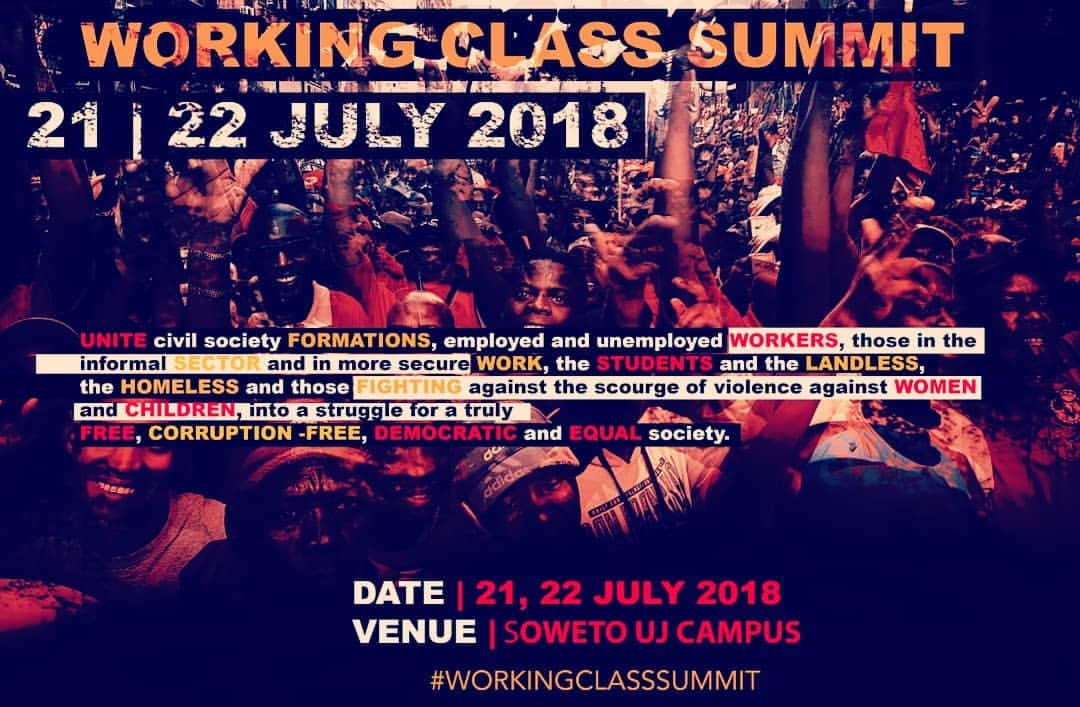 Working class formations in South Africa have been fragmented and in decline for a long time. Saftu itself emerged from a split in Cosatu, which had progressively lost its militancy and independence. It was not just the splintering of the trade union movement that signaled its weakening. Many Cosatu affiliates had become highly bureaucratised and unable to oganise the increasingly informalised and precarious components of the labour force. The insurgent social movements and grassroots based community organisations that were at the forefront of making Apartheid ungovernable in the 1980s had also become shadows of themselves, many of them incorporated into the ANC or the local government system.

There was a moment in the late 1990s when it seemed we were on the brink of a new wave of working class mobilisation. There were big general strikes against privatisation and job losses. A range of new social movements emerged, such as the Treatment Action Campaign, Anti-Privatisation Forum, Landless Peoples Movement and Abahlali baseMjondolo. They were propelled by the anti-globalisation movement and challenged the post Apartheid Government’s neoliberal policies.

However, loyalty to the ANC prevented the leaders of the trade union movement from forging working class unity with their counterparts in the townships and villages. And ultimately the wave of militancy directed at the Mbeki government was tragically captured and channeled into bringing Jacob Zuma and his cohorts into power.

And then there were the mass strikes on the platinum belt and the Western Cape farmlands of 2012/13. They shook the country and reminded the world of the proletarian character and militant traditions of the working class movement in South Africa. The “Numsa moment”, with its break with the ANC Alliance, was a product of the revival of working class militancy. But its initiation of the United Front and call for a movement for socialism were not able to unify working class struggles. Rather it was the EFF and the charisma of its leadership that sought to co-ordinate the anger and disgust, not just with Zupta “state capture” (corruption and the cronyism of a dysfunctional state) but with the mood of economic and social despair.

Yet, with no anchor and real echo in the labour movement, the EFF has not been able to sufficiently unify and represent the complexity of South Africs’s dispossessed and marginalised. The critical role of organised labour has been too often and quickly dismissed through notions of representing a labour aristocracy amongst 10 million unemployed and millions more under-employed, precarious and impoverished.

It is into this hiatus that the Saftu initiated Working Class Summit places itself. Defying most expectations, Saftu organised a highly successful general strike and demonstrations against a series of labour reforms and a miserly minimum wage initiated by Ramaphosa. It is this momentum that gave the Saftu NEC the confidence to call the Summit into existence:

“The NEC agreed that Saftu has to ensure that it does not lose the momentum, which is building up. The strike must not come to be seen as a flash in the pan but proof that we have become a catalyst for their struggle which has raised new hope for the workers and the poor and can help set the agenda for the working class and can take their struggles to even higher levels.

We cannot take our foot off the accelerator and let the working class down. The campaign must not only continue but also must be intensified and maintained into the future.”

The Statement then goes on to announce that:

“Amongst other things the Working Class Summit will announce the date of the three-days national general strike. Already on 25 April we were joined by organisations representing informal traders, casual workers and the unemployed. This has now become more than just a “Saftu strike”. Amongst others Saftu will propose that the Working Class Summit demand the creation of five million decent jobs in the next five years and the enrolment of five million young workers in universities and technikons, etc.

We have also written to many formations and we are working hard to reconnect with all working class and pro-poor formations already battling against unemployment, land poverty, hunger, homelessness and for houses near their places of work, infrastructure where we live, public transport, better healthcare, better education, and battling crime and women/children abuse, etc.

All these struggles currently isolated and ignored by the government will be knitted together into a single broad working class and poor people’s struggle with different dimensions to accommodate and take forward all the demands of our people.”

The Summit was largely true to the vision contained in this Statement. 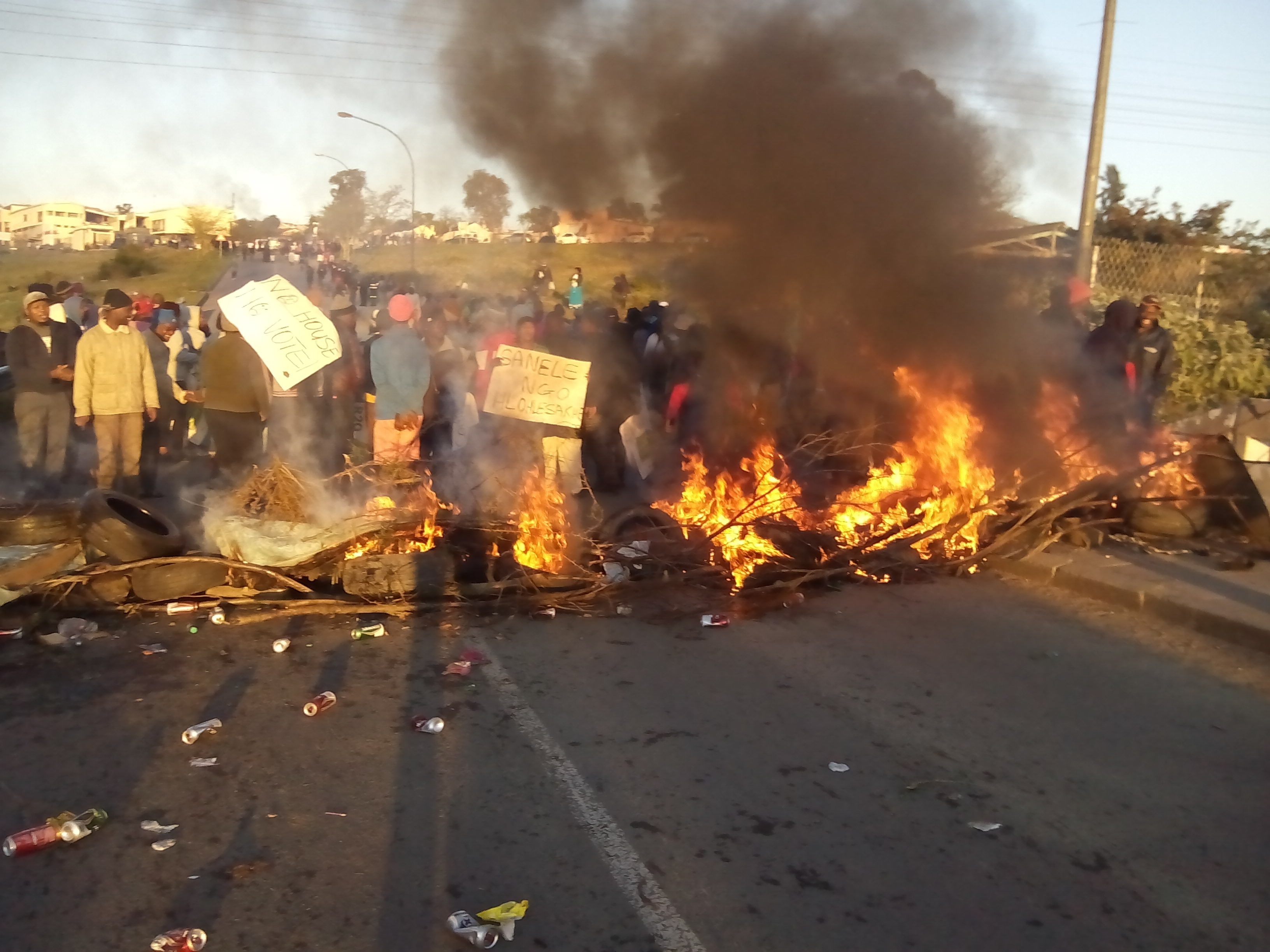 It was no mean feat to bring 147 organisations together in one space, big and small, community and unions, over 1,000 delegates with very little money, organised in just a few weeks. It marks a potentially important step forward in renewing the workers movement in this country.

This is so particularly in the context where Ramaphosa’s time in office has seen an intensification of neoliberal policies, including increased VAT, increased fuel levies, attacks on workers right to strike and major spending cuts, in basic education, health care and human settlements. This puts to bed any prospects of a “New Dawn”.

Many parts of the country continue to rise up in response to deepening social and economic woes. Threading through most of these struggles, people are demanding service delivery, jobs, housing and better working conditions. Many recognise that even though these struggles are interconnected, the responses are uncoordinated.

This was echoed in the welcome address given by Saftu President Mac Chavalala, who asserted the importance of bringing together working class formations and moving towards building working class unity that would be able to more effectively fight injustice on the streets. Chavalala argued that the Summit should be used as the basis from which the working class and poor “build common demands and a programme of mass mobilisation”.

Discussion was taken forward in eight commissions, Even though the commissions had discussed different topics there was consensus on two points:
1. The need to develop campaigns that would put “emergency” demands on the table in order to build working class unity through struggle. These urgent demands would be used as the basis for bringing together working class forces (organised workers and unemployed forces as well as the urban and rural poor). They included organising against the VAT increase, scrapping the amendments to the Labour Relations Act (which would further limit the right to strike), a moratorium on all evictions, decent housing, and fighting against gender based violence and patriarchy, starting with the support for the Total Shutdown Campaign.

2. The need to build working class unity, based on principles of democracy, through a bottom-up approach. This would be done by having provincial working class assemblies across the country in order to build these struggles from below. Bringing together trade unions and social movements would lay the foundation for the coming together of working class formations in every municipality and province, feeding into a united national discourse.

There was not agreement on everything. There was strong debate about the kind of political organisation that is required at this time. Some argued for the establishment of the Socialist Revolutionary Workers Party (SRWP) and came with the intention of using the Summit as an opportunity to push this agenda.

Few would argue against the idea of establishing a political movement that prioritises the interests of exploited workers and the poor majority. However, there was heated debate about the nature of the party and the process required to bring it to fruition. Numsa wishes to establish its workers party on Marxist-Leninist principles. However, in the current context, following the failures of Syriza, the Workers Party in Brazil and the United Socialist Party of Brazil, it is critical to experiment with new forms of organisation, where democratic principles are a non-negotiable. Here the examples of Rojava and Barcelona en Comú stand-out in the way that these organisations have been able to bring together vibrant social movements and electoral organisations with a focus on building at provincial, regional and local levels.

These processes have been critical in ensuring the decentralisation of power within these formations. They have also laid to rest the false dichotomy between movements and parties. An effective strategy for today would have a dynamic and fluid relationship between the two.

Unity of the working class

The Summit was a start to addressing the all too common sectarianism and abstract propagandism that characterises the left, indicating the possibility of a left revival. What has been missing for a long while is the unity of organised labour, with its power at the point of production and in the economy, so important in providing a sustainable base for organising and mobilising with the insurgency of the township.