#OccupyLuthuliHouse and the “morbid symptoms” of exile and incumbency 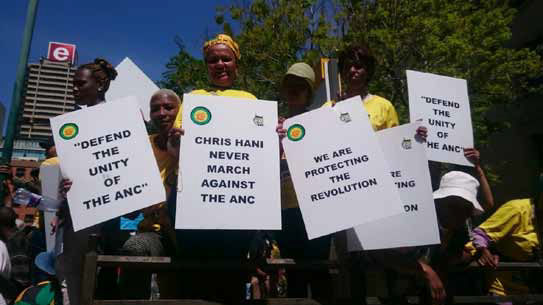 The poster is as simple as its message. With just two logos, that of the ANC Youth League and the ANC, the black text boldly reads, “Chris Hani never march(sic) against the ANC”. We often see this, when it is comrade against comrade: the spirit and memory of stalwarts long gone are summoned readily. In this debate, Chris Hani’s memory would not be overlooked, when it could easily be deployed to “caution” those with a different perspective. The poster, and whoever authored it, did however overlook something else: Chris Hani did protest against the ANC.

In 1967 Chris Hani had been living with Unity Movement intellectual, Livingstone Mqotsi, in Lusaka. With several other comrades he had written a memorandum decrying the luxurious lifestyle of the exiled leadership and their reluctance to prioritise the armed struggle. The memorandum also highlighted the growing notoriety of the ANC’s security department in “hounding out” those who differed with the leadership:

“In the prosecution of its internally directed activities the Security Department has become notorious. Those who serve in it have the central task of suppressing and persecuting dedicated cadres of M.K. who have nothing to lose by participating in the struggle except their chains.”

The reaction to the memorandum was swift, albeit not unanimous. Hani would later thank Mqotsi for refusing to allow a group of MK men to enter the house at midnight. The men had been looking for Chris. It is anyone’s guess what would’ve happened if he had been found. But Hani, alongside his fellow signatories, stated the following in their second memorandum:

“Orders were given for our arrest for alleged treachery. Dungeons were dug at Livingstone for our reception. We would probably have been thrown into these dungeons but for the intervention of a leading comrade.”

“Chris Hani never march(sic) against the ANC”. Surely the message on the poster couldn’t be true. The message, however, did signify something instructive about the ANC. It may have been that this was an act in historic forgetting, but it also signaled two things: an ANC at odds with itself, and with an ambivalent perspective to its history. The latter is as dangerous as the former. Both present significant limit  to the ability of the ANC to “rescue” or “cleanse” itself, as many in the ANC often tell us. This task takes place in an environment much different to what Hani experienced in the late sixties, but I guess a “crisis is a crisis is a crisis”. Journalist Richard Poplak describes this “crisis environment” in the following comedic but poignant terms after the #OccupyLuthuliHouse protest:

“On Monday we learnt just how sick the joint is after one of its inscrutable little spats spilled out of Luthuli House and onto the streets of a city governed by a hair care tycoon who thinks Boris Johnson is a genius.”

The old is dying and the new cannot be born

The situation may best be described as an “interregnum”. Many theorists have, for the last two decades, anticipated that the ANC and South Africa would soon reach this point. Italian Marxist, Antonio Gramsci describes an interregnum as a crisis which “consists precisely in the fact that the old is dying and the new cannot be born; in this interregnum a great variety of morbid symptoms appear.”

Like in a theatre play, transition away from such an interregnum often needs the “exit stage left” by the “old” and “enter stage right” of the “new” so that the play can continue. This has happened before in the history of the ANC, at many stages in its 104-year history. I am interested in two stages, when the “old guard” and the “youth” were in conflict and what was at stake was control of the party machinery and the continued struggle for the total liberation of Africans in particular and blacks in general. More importantly what “variety of morbid symptoms appear” during both periods? Their appearance leads me to believe that they are recurrent features of the history and present of a party in irreparable decline. Also, the parallels are too obvious to ignore: the Hani memorandum led to the historic Morogoro Conference in 1969, and the #OccupyLuthuliHouse campaign has at its center the demand for a Special Consultative Conference.

It’s all happened before

The first part of this history relates to the organisation during the days of the Native Representative Councils (NRC) and other structures such as the All African Convention (AAC) and its rejuvenation by the ANC Youth League in 1944. Luyanda ka Msumza and Robert Edgar argue that, despite the varied class composition of “Congress Youth” at the time, what brought them together was “… their impatience with the unwillingness of the ANC ‘old guard’ to adopt militant tactics to contest white rule”. In addition to this, there was the critique that ANC leaders had “grown remote and aloof from the African community and were trapped between apprehensions over losing the few privileges (by virtue of their involvement in the NRCs) they received from the government and their qualms over mass African protest bringing down the wrath of the government”. 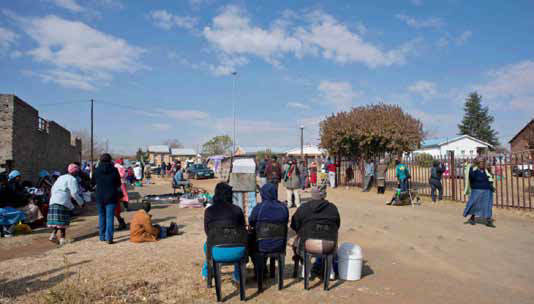 The ANC has privatised services like pension delivery: “People’s engagement on the first of each month is rarely with the state, but with bank tellers, CPS agents, ATMs and grocery store clerks, places where the state is, in effect, absent”. Here, three women who work for a loan shark wait for grant recipients in Thembalihle township in the Free State.

Both in the 1940s and two decades later in the 1960s there was this strong perception of “distance”, “corruption”, “reluctance to intervene in the social crises faced by the African people” and the “reluctance to cede elite privileges in pursuit of justice”. These criticisms remain throughout different spaces and time in the history of the organization; in the 1940s, in exile and even in the democratic dispensation. In addition to these “morbid symptoms” is the growing sense of securitised responses to internal dissent, and the common perception that leaders protect individual interests above those of the organization. The Hani memorandum is telling in this regard:

“There are certain symptoms which are very disturbing and dispiriting to genuine revolutionaries… for instance, in Lusaka a furniture industry is being run by the ANC. In Livingstone a bone factory whose original purpose was to provide cover for underground work in Botswana is now being used as a purely commercial undertaking … And some of the people in charge of these enterprises are dubious characters with shady political backgrounds”

Couple these “symptoms” with the difficulty of navigating a deep socioeconomic and political crisis not only in South Africa, but the world over. This is the difficult space the party is in. Despite its often “progressive” policy postures, the ANC has ceased to be a “disciplined force of the left”. Look at the work of Christopher Webb on grants and the role of privatisation, financialisation and decentralisation/outsourcing in their administration. One wouldn’t be surprised at what Oupa wa Lehulere called the ANC’s “vision of integration into a society dominated by white monopoly capital”. Webb argues that one outcome of these “morbid symptoms” has been that the ANC has been able to articulate a pro-poor posture through social policy whilst at the same time promoting the neoliberal logic of accumulation and class formation:

“People’s engagement on the first of each month is rarely with the state, but with bank tellers, CPS agents, ATM s and grocery store clerks, places where the state is, in effect, absent…… expansion of services to the poor has been marshalled by the ANC as evidence of its pro-poor developmental policies, while many of these projects have been severely undermined by logics of cost-recovery, privatization and outsourcing that have led to anger and discontent among the poor and the enrichment of old and new elites”.

Which history must we look at?

Those who say the ANC can be rescued, and returned to its “former glory” must tell us which ANC they are speaking of, and a return to which period. The “morbid symptoms” are nothing new. They are a repetition of an old song. A “throwback”, as the youth would say, to an era we are often cajoled to remember with glory and reverence. But never to the difficult debates in the history of the organization.

It is the repeated mistakes that show us how important these periods are, even for the present. Those who cajole us to have faith in the ANC, and its ability, like the ocean, to cleanse itself must remember that failure to learn from historic institutional failures carries serious consequences. Ask any liberation movement on the continent.

Moreover, as Arundhati Roy argues, “real resistance has real consequences”. We would do well to be interested not only in what the contending forces are resisting, but also what they propose. More importantly, we must ask whether their ideas, policy and organisational process represent a marked departure from the “morbid symptoms”. If not, then this is another part of a movie we’ve all seen before, and the reel from which it is played is slowly running out.

Ayabonga Cawe is a development economist who writes on public policy, race, power, economics and history. He is Programme Manager of Economic Justice at Oxfam South Africa (OZA).