Unions must fight the companies Bill

Unions must fight the companies Bill 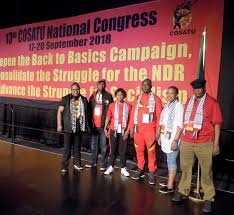 We can be proud of having some of the most progressive legislation in the world. Our shame is that we are among the worst for implementing our own laws. A new first is legislation that remains so neglected for such a long time that we forget its very existence.

Section 30 of the current Companies Amendment Bill, which ostensibly seeks to catch up with many other countries in addressing the ever-expanding gap between what chief executives pay themselves and their workers, is such a first.

Section 27 (4) compels the Employment Conditions Commission to “research and investigate norms and benchmarks for proportionate income differentials and advise the minister on appropriate measures for reducing disproportionate differentials”.

Legislation curtailing executive pay was not the way to attract foreign investment deemed essential for achieving the government’s then socioeconomic objectives. This is probably why the government sought — successfully, as it turns out — to bury Section 27 (4).

Twenty years later, the new Ramaphosa government is still predicated on attracting foreign investment. This is probably why the Companies Amendment Bill is so “disappointingly weak”, as Tracey Davies charitably puts it (“Chief executives’ pay is no small issue”, December 14 2018).

But this 20-year and continuing failure to address South Africa’s world-beating inequality is possible only because of the silence of the trade unions. Section 27 (4) exists only because labour federation Cosatu threatened to withdraw its support for the whole Employment Equity Bill unless the legislation addressed the wage gap between management and workers. I was a parliamentary labour researcher at the time and can attest to the militancy of Cosatu’s position in the face of resistance from government and business.

Why the labour movement as a whole has aided and abetted the burying of Section 27 (4), without even the recognition of a tombstone, remains an unanswered question. We still await labour’s roar at the woeful inadequacy of Section 30 of the Companies Amendment Bill.