Some lessons from history

Some lessons from history By Jan Theron

Theron, was General Secretary of Food and Canning Workers Union from 1976 to 1986, writes on lessons for the new federation ahead of the launch of the South Arican Federation of Trade Unions (SAFTU). Published in Amandla! Magazine Issue 51 [April 2017]

“I plead guilty as charged…” Zwelinzima Vavi wrote in the Sunday Times about a month ago. He was writing about two corruption scandals, the one in Eskom and the other in the banks. The “charge” is for his role, as general secretary of Cosatu. He assisted in propelling to the highest office in the land the person he believes is responsible for the rampant corruption these scandals evidence, “in the naïve belief that he would turn the fortunes of the working class.” Since Vavi wrote that, we have moved on to an even grosser corruption scandal, concerning social grants, which of course affects the working class most directly.

No faith in “big men”
It is well and good when our political leaders acknowledge their mistakes. The belief that any individual could turn the fortunes of the working class around is indeed naïve. But naivety is not an adequate explanation as to why a federation of trade unions would entertain such a belief. In the trade union I once worked for, workers learned not to put their faith in “big men”. They were also schooled not to trust leaders implicated in corruption. When President Mbeki dismissed Jacob Zuma as Deputy President, he was making a symbolic statement. Everyone opposed to corruption should have agreed.

Why then did Cosatu eagerly endorse a High Court judgment which was so obviously wrong? Could things have been different in 2008, if it had a more principled stance toward someone obviously implicated in corruption? Corruption was not just about ”eating the money”, in the trade union I worked for. It went hand in glove with leadership intent on pursuing their own interests at the expense of those they purported to serve. The story of the union was as much about ridding itself of corrupt leaders as the disputes for which it became famous, at Fatti’s and Moni’s in 1979 and elsewhere in the country in the early 1980s.

Unions ignored precarious workers
It was also a story about how, together with other emergent trade unions, it was able to displace the established trade union movement of the time. This was a movement made up of trade unions representing only a section of the workforce in better paid jobs. It was led by unashamed racists and people intent on pursuing their own interests. The unions that formed Cosatu outorganised it, but it was not long before Cosatu began behaving like the movement it once displaced. Increasingly, its affiliates represented only a section of the workforce in better paid jobs. For at least a decade from the late 1990s onwards, these unions turned a blind eye to the growing numbers working alongside their members in the same workplaces, earning a fraction of their wages.

As was the case in the 1970s and 1980s, these workers were regarded as unskilled. They were also regarded as difficult to organise because they were on contract, although the nature of the contract had changed. Cosatu in 2008 began calling for labour broking to be banned. By doing this, it was in effect asking Jacob Zuma to legislate a solution for a problem which its affiliates had made no serious attempt to address through organisation. And labour broking was only an element of the problem. Part of the explanation for their organisational failure was an inappropriate reliance on law, which I characterise as “legalism”. But it also had to do with a misplaced emphasis on workplace organisation, and a misconceived notion of worker control.

Worker control
”Worker control” always meant different things to different people, but the most widely accepted understanding of the term related to the control ordinary members were supposed to exercise in their own organisation, starting in the workplace. Already in the early 1980s this was seriously compromised by what I refer to in my book as the surreptitious scheme of ”full-time” shop-stewards. In terms of this scheme, shop-stewards would no longer do the work they and their fellow workers had been employed to do. Instead, their employers would pay them to be shop-stewards. It should have been obvious that ”shop stewards” such as these could be easily manipulated, and would never be subject to the control of the workers who elected them. This is perhaps why the existence of the scheme was never disclosed during the protracted talks that gave rise to Cosatu. 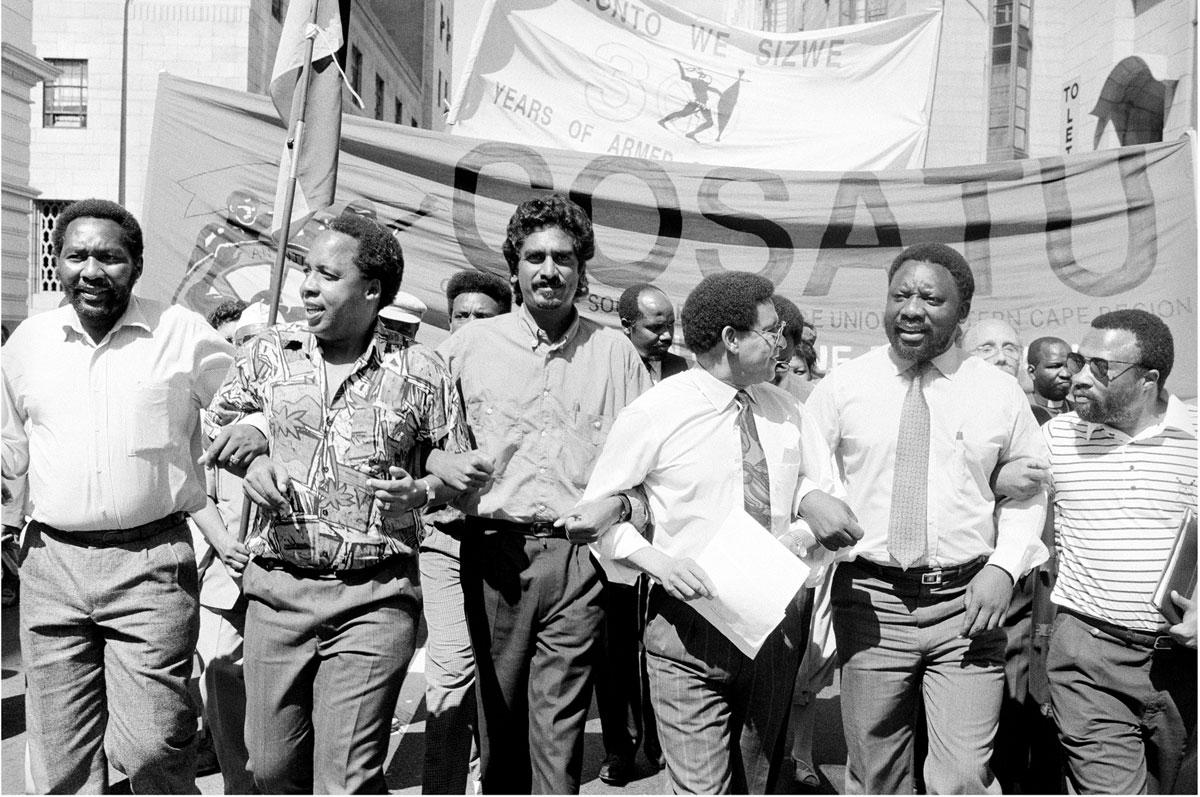 Why did some trade unions go along with this scheme in the first place? In the late 1970s and early 1980s trade unions were understandably concerned to safeguard their autonomy. However their focus was almost exclusively on the threat from the apartheid state, and hardly at all on the threat to their autonomy posed by employers: in particular, the bosses of multi-national corporations which introduced this surreptitious scheme, and had their own agenda in recognising trade unions. The end result of the scheme was equally predictable: full-time shop-stewards who saw themselves as a cut-above the members, and were seen as an extension of management. And in effect they were, as the workers at Lonmin realised before the Marikana massacre.

The decentralised model
Workplace organisation is obviously important, but it is more important that a union creates a space where workers from different workplaces in the same locality are able to meet. That is how workers develop their identity as a class. In the union in which I worked, this space was at the branch, and the branches were financially autonomous. This meant each branch could employ its own official, and pay his or her salary. It also meant workers had real control at a local level, while the fact that the branch paid an affiliation fee to the head office ensured that the centre remained accountable. This is what I describe as a decentralised model of organisation. However, in all the other unions that formed Cosatu, there were either no branches, or the branches were not autonomous. Instead, their head offices controlled all the money. This was not because workers wanted it that way, but because foreign donors did. Financial self-sufficiency was also not important for these unions, so they never developed a culture of zero tolerance for corruption.

When Cosatu was formed, it adopted a policy of having one union for one industry, and the union I worked for was confronted with a choice. Either we merge with other unions in accord with the policy, or we abandon our decentralised model. The union opted to in fall-in line with other unions. I describe the consequences in my book. There was a dramatic decline in the capacity of branches to respond to the needs of workers. This brought an abrupt end to initiatives at a branch level to organise vulnerable workers, such as farm workers. At the same time, steps were taken to subordinate branches to head office control. This also suited political organisations wishing to subordinate unions to their agenda, and further eroded trade union autonomy.

Money siphoned off into investment companies
One of the steps taken to consolidate head office control was to make subscriptions a percentage of what workers earned. Their permission would therefore no longer be needed for subscriptions to increase, and soon the unions were awash with money as a result. This money could have been spent establishing strike funds or assisting unorganised workers. No union did so. Instead, money was siphoned off into investment companies. Trade union investment companies enabled leadership to take the pursuit of its own interests to a whole new level, and resulted in the creation of a number of ”unionaires”. The symbolic statement this made was that the trade union leadership could aspire to become wealthy overnight, and own a house in Camps Bay. It is better than nothing, perhaps, that Cosatu has made noises about corruption in high places over the years. It would have been far better if it had been an example of what an incorruptible organisation was like. Now that Cosatu is fragmented and there is talk of establishing a new federation, it is all the more important that the trade unions learn some lessons from their history.

Jan Theron is the author of “Solidarity Road: The Story of a Trade Union in the Ending of Apartheid” on his experience as General Secretary.