About 150 learners march to the Metro South office of the education department Students from Philippi High marched to the offices of the Department of Education in Mitchells Plain demanding a new school be built. 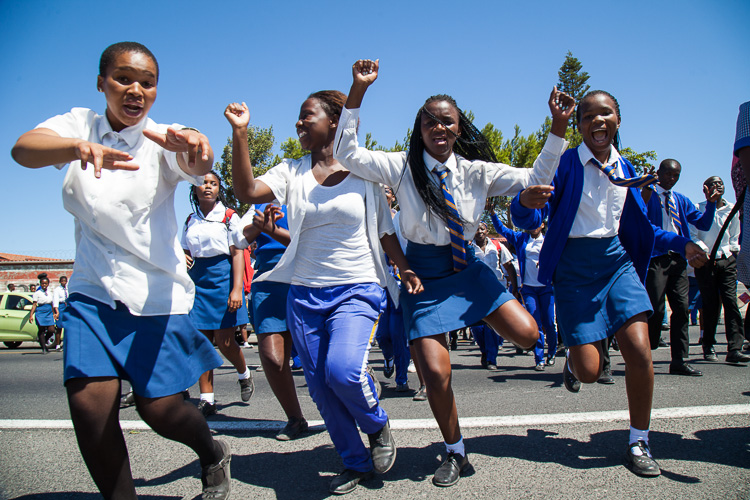 On Monday, 6 March 2017, about 150 students from Philippi High School marched to the Metro South Education District Office demanding that a new school they say was promised to them be built.

At the start of the protest, students blocked traffic on New Eisleben Road with rocks and debris. Police fired at least one stun grenade to disperse students. Police made several attempts to stop the march, claiming it was illegal, but the high school students proceeded.

At the gates of the education department, about 60 students crammed the entrance preventing vehicles from entering.

“We are tired of the department’s promises,” said a student over a megaphone. “If there is no plan for our school, the school will be shut down.”

Students want the department to inform them on the status of the new school it had promised. A year ago, police fired stun grenades at students protesting over the lack of infrastructure.

After an hour, from behind the gates, Director of Metro South Education District Glen Van Harte, addressed the students. “If the gathering is about a new school, I don’t know why you are here,” he said.

Van Harte told students a new school would be built.

Athulle Baba, who matriculated at Philippi High and is now at university, said classes at the school were taught in shipping containers which were hot in summer and cold in winter.

Mzimabi Mathenga, a Grade 12 student, said the Department had promised to build a school in two years, but there was no sign of it.

“We need the truth about the [status of the new] school. It’s our education,” said Mathenga.

Students said they would continue protesting until they received clarity on the new school.

Philippi High School principal Mandisa Cenga said the new school was in progress and he had kept students and teachers informed. He said a meeting with the architects scheduled for Monday had to be postponed because of the students’ protests.

A spokesperson for the Western Cape Education Department said the school was “in the design phase”.

“Based on the current budget allocation, the school should go into construction in the 2017/18 financial year.”