Farming can be a major source of greenhouse gas: Keeping traditional chickens is climate- and environment-friendly. 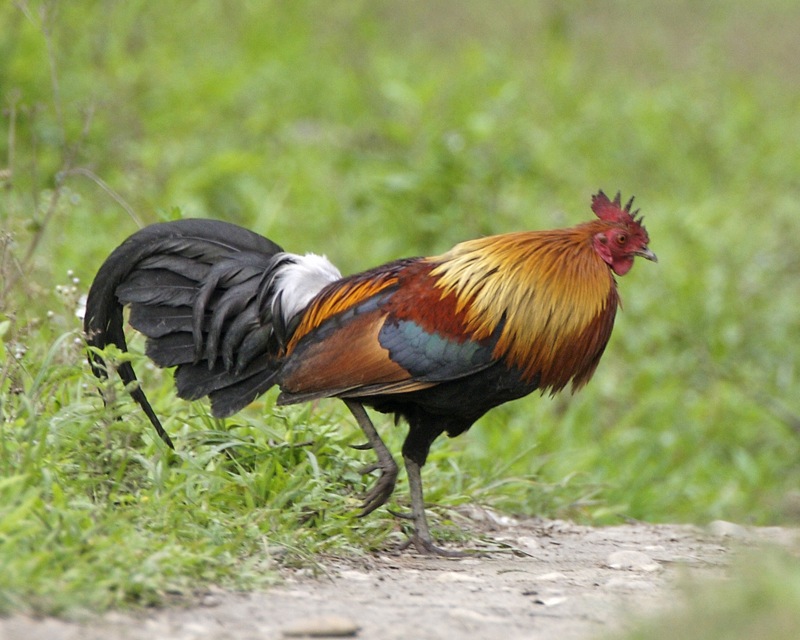 Ed Wethli pointed out that domestic chickens began in Southeast Asia, with the Red Junglefowl (Gallus gallus) some 8000 – 10000 years ago. From there, they spread all over the world, as chickens are easy to transport.

“Traditional“ South African chickens are still closely related to the original Red Junglefowl and are still farmed in a traditional way. That means that they are usually kept in rural environment by individual families using them to complement their subsistent farming. The chickens are allowed to roam in the village and very little money and labour is invested into them.

Keeping traditional chickens is to be encouraged because
•    Chicken meat is a good source of protein
•    Eggs can also be eaten
•    Selling a chicken once in a while provides extra income
•    In rural communities, chickens play an important role as gifts or for traditional or ritual occassions, such as funerals or weddings

The traditional way of chicken farming is still practiced in many parts of the world. In developing countries, traditionally kept chickens account for 75%-90% of the total poultry population. This does not apply for South Africa because of our large poultry industry.

Especially during the last 200 – 300 years different variations of “commercial“ chicken were bred through interbreeding or hybridisation, each one with certain characteristics: some are extraordinary good egg layers, others grow quickly and produce a lot of meat.Compared to traditional chickens these breeds are much more productive.
Still, commercial chickens are not an option for traditional chicken farmers. They are less resistant to harsh conditions and more expensive to keep, e.g. because they only develop well when fed with supplementary food.

The important question therefore is: How can one improve the productivity of traditional chickens without investing a lot of money? Ed suggested several measures:

•    Investing in the chickens´ health
Many chickens die due to the Newcastle disease or Chicken Pox. It can be avoided by vaccination. Vaccines are relatively cheap.
Another problem is internal parasites such as worms and external parasites such as lice. The use of insecticide powder and antiworm can protect the chickens from them. Although there is no scientific proof, several plants seem to work as well.
•    Investing in cheap and simple chicken houses
Chicken houses provide shelter, especially during the night, when the chickens are particularly likely to be killed by predators
•    Increasing the number of surviving chicks
This can be done by keeping them together with the hen in a sheltered space until they are approximately one month old. Investing in special chick feed is worth the expense as well.
•    Improving the feeding
That does not mean one has to invest money in expensive supplementary feed. Traditional chickens live mainly on a herbal diet, therefore they often lack protein. One can easily grow fly larvae or earth worms as an additional source of protein.
•    Supervising the eggs
When one provides nests, the hens use them for laying. That makes it easier to control how many eggs were laid. It is no problem to take away eggs, as long as at least one remains in the nest, otherwise the hen will stop laying.
•    Selective breeding
Strong and healthy looking hens have strong offspring. It is enough to keep one male for ten females, because otherwise the cocks start fighting.

Ed also pointed out that it is possible – though not ideal – to keep chicken in the backyard of township houses. There are several bylaws to follow, that for example limit the number of chickens.

Lucia presented the finalised version of her cartoon. It is now available here

Her 2nd time-motion film is to be on solar water heaters, which she hopes to be ready in time for a first showing at our next meeting.

Lucia recently ran a day workshop for community activists. The workshop showed that the technique can be shared easily.

A potentially most important legal challenge is taking place on 2nd March in the Pretoria High Court. The Centre for Environmental Rights will be challenging the Minister of Environmental Affairs for granting environmental authorisation for the proposed Thabametsi coal-fired power plant. This approval ignores an official climate change impact assessment that reveals that the power station would emit too much green house gas and and very likely would additional exacerbate the drought due to its high water consumption.

It will be the first climate change court case in South Africa.

Jeff has already informed the South African and the Western Cape Water Caucuses. Both say they will be addressing the threat.

Reports back from the community revealed, that people still face the enforced installation of limited water meters and water cut-offs. Jeff encourages the participants to engage with the EMG to follow up on the topic

This is an update on the long running court action against the government for its failure to consult the people.  The lastest court appearance took place on 13th December 2016, when the government tried to sneak out by giving the parastatal ESKOM the sole responsibility. The next Court appearance is on 22nd February. Liz expressed her hope that there will not be any further delays, other than the Court delaying its decision.

Besides that Budget Day on 22nd February is going to reveal whether there is any more money budgeted for Nukes.

Right to Know is organising a protest march to the Court on 22nd February. Organisations and individuals are urged to participate

6.    Eskom and the Denton Report (Anna Bucher presented on behalf of Richard Halsey)

ESKOM outsourced the report into why it was facing such serious – and costly – delivery problems.  Eskom stopped this short-term, very costly report soon after the report began documenting high-level malpractices but paid the company the contracted R 20 million for the full report. Eskom kept the incomplete report secret but the 2ndof 4 known drafts has now been leaked.

The report reveals a many cases of financial mismanagement and corruption. Important key findings are:
•    Senior executives have not considered all business options but just handpicked suppliers
•    ESKOM overpaid for coal and diesel
•    Employees are more interested in gaining personal profit than in managing the common good

The media claim that Denton is just the tip of the ice berg. A full and unobstructed report is an urgency, with the results being made public. Legal action against the responsible ESKOM-executives should be taken as soon as possible.

The Cape Town Municipality and the company New Horizont Energy have createda public-private partnership (PPP)to build a new biogas digester in Athlone. The climate-friendly initiative should be applauded whereas not for the City using climate change as a business opportunity for a private company. Anna has already contacted the Cape Town Municipality for more information about the PPP, but so far she has not received an answer.

The meeting agreed to
•    Establish a new standing agenda item.  Beginning with out next meeting, community members will begiven the time to report back about what action/s they have taken arising from the previousmonth´s input and discussion
•    Leave the main agenda item and date of the next meeting to AIDC to determine