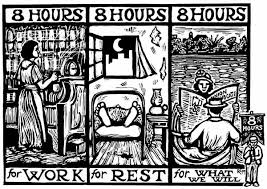 Since the 19th century May 1 has been International Worker’s Day, chosen by organised labour to celebrate the contribution of workers around the world.

But it’s frequently forgotten that the day actually celebrates a particular achievement of the labour movement: being able to do less work. Not better paid or decent work, but shorter working hours.

Today more and more people around the world are facing precarity, casualisation, inequality and unemployment. It’s time to pursue a new agenda for a new global labour movement – or rather, to update the old agenda of the 19th century: less working time and more money for all, in the form of shorter work days and a universal basic income.

What happened to the struggle?

An eight-hour work day and weekends off were far from the norm for most full-time workers before the early 20th century. They usually worked 12 to 16 hours a day, six days a week. It took a protracted, often violent organised labour struggle in the face of strenuous opposition to change that.

Forty-hour work weeks were finally legislated around the world less than a century ago. This seemed like just the beginning. The economist John Maynard Keynes predicted in 1930 that thanks to technology, within a century we’d all stop worrying about subsistence. We’d work 15 hours a week, just enough to keep us from getting bored.

In some ways he was right. Technological advancement has exceeded his wildest dreams; productivity and output per worker has soared. But this has proven to be our problem rather than a source of liberation.

The fruits of soaring productivity growth and the wealth generated by automation are not being redistributed via rising salaries or shorter working hours. Instead they are captured by a tiny global elite. The richest 1% now has more wealth than the rest of the world put together. Yet there isn’t a mass organised struggle explicitly calling for a redistribution of wealth and work.

Instead, in places as varied as South Africa, the US and Europe increasingly frustrated, alienated populations faced with the rise of precarious work and wage stagnation point their finger at foreigners and immigrants. Their calls are not for redistribution, but for isolation and xenophobic exclusion.

South Africa is a prime example of this contradiction. It’s the most unequal major country in the world, with staggering wealth and unemployment rates. It has experienced years of deindustrialisation and jobless growth.

South Africa is experiencing the sorts of contradictions that follow in automation’s wake. Factory and even service jobs are being automated, and CEOs earn 541 times the average income. Meanwhile, people desperate for a wage resort to what anthropologist David Graeber terms “bullshit jobs” like pumping other people’s petrol or watching their parked cars.

From labour to leisure

An obvious solution would be to cut back on the standard work week so that demand for labour goes up.

Education institutions would have to scramble to fill some of the demand for skilled workers. But the pressure might be a good thing. It would push the school system to produce well-equipped graduates, and provide new solutions to problems such as the university fee crisis, spurring greater urgency for the state or private sector to underwrite higher education programmes.

This would also decrease inequality. The only way to keep wages the same while hiring more people is for wealth to get spread out: for the highest earners and others who capture the fruits of corporate profits (i.e., shareholders) to get less so workers get more.

Shortening working hours has also been linked with a host of other social goods like better health outcomes, less impact on the environment, higher gender equity, and increased happiness and productivity.

Labour must also be decommodified more broadly. Then even those unable to sell their labour in a rapidly automating world would reap some of automation’s fruits. Such a call is both radical and attainable. It’s attainable because it simply spreads out the gains from productivity growth. It’s radical because we live with the cultural ramifications of centuries of labour scarcity, when everyone had to work as much as possible to produce enough goods to go around. That’s not the case anymore, yet the old mentality remains: hard workers are morally superior, and laziness is unquestioningly a character flaw, a moral failing.

This is a default assumption not only among the middle and upper classes, but as my own and others’ recent research in South Africa and Namibia shows, among the unemployed poor as well.

Originally  published in The Conversation