Radical economic transformation: between the smoke and mirrors [Amandla 53 Editorial]

Radical economic transformation: between the smoke and mirrors 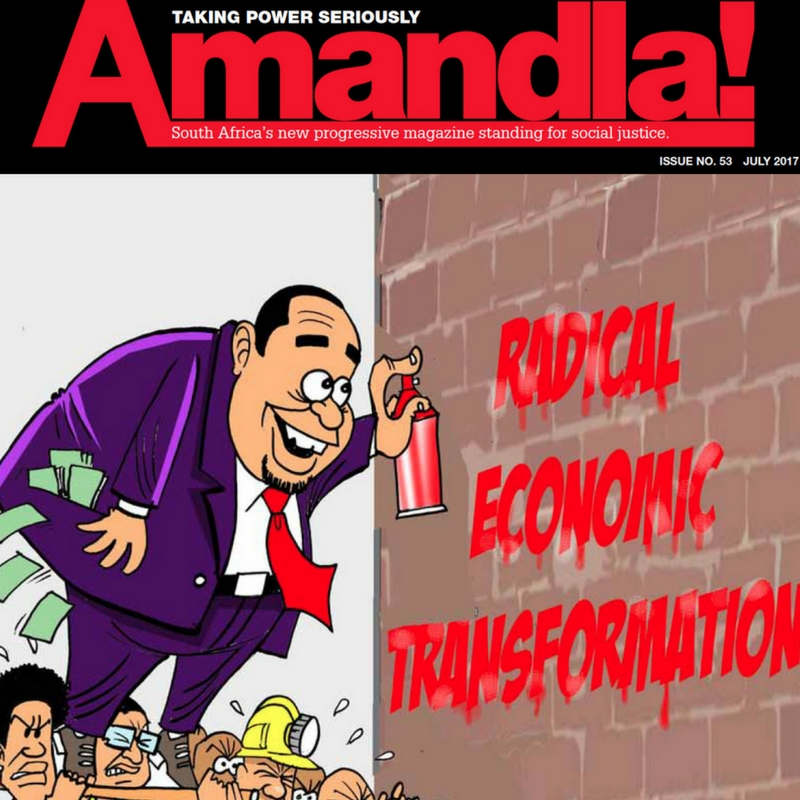 A complicated game of smoke and mirrors is being played as the battle unfolds for the ANC, the state and the inside track to plunder South Africa’s economic wealth. Nothing is what it seems. Reactionaries are dressing themselves up as radicals. Communists are aligning themselves with big capitalists. And to top it all, the Public Protector adopts the radical position of Numsa, attacking the foundation of neoliberalism, namely Reserve Bank independence.

Since our last editorial, we have seen the torrent of Gupta emails that confirm the identities of the state officials that have been key to facilitating ‘state capture’.

They include the President (of course), cabinet ministers, Directors General and their deputies, and CEOs and Boards of State Owned Companies. We admit we got one thing wrong – we imagined Zuma ending up as the guest of Duterte in the Philippines. We should have realised that a mansion in Dubai was more likely. The release of these emails suggests that powerful forces opposed to Zuma are investing considerable resources to bring him down.

The ANC’s response to this damning flood has been to continue its camouflage campaign on so-called “Radical Economic Transformation” (RET). So Malusi Gigaba is cheered at the Black Management Forum when he speaks in favour of RET: “We either recoil in our plans or implement so minimalist a transformation that it would amount to no change at all”. And then in the same speech he expresses support for the neoliberal National Development Plan (NDP).

Similarly, at a Treasury press conference, called to respond to the latest downgrade of SA’s credit rating by Moody’s, Gigaba praises Zwane’s new Mining Charter in the terms of RET and then confirms the Treasury’s unshakeable adherence to neoliberal policies of austerity, deficit reduction targets and the like.

The real conservatism of Gigaba is demonstrated by Busisiwe Mkhwebane, the Public Protector, who recommended changing the South African constitutional clause dealing with the role of the Reserve Bank. She proposes changing from a mandate “to protect the value of the currency in the interest of balance and sustainable economic growth” to a mandate “to promote balanced and sustainable economic growth… while ensuring that the socioeconomic well-being of the citizens is protected”.

Interestingly, Gigaba also attacked the black middle class for failing to take the side of the government against established capital: “The black middle class, owing to its junior position in the economic relations, is never heard criticising the conservative vested interests, but will be quick to criticise government for any wrongdoing … because government is easy to pick on and will not apply any sanctions against forces that brought it to be, whatever the unfairness or viciousness of the attack or criticism.”

At last, a clear declaration of the real class nature of RET: support the Zuptas and sections of black capital against “white monopoly capital” to whom the likes of the Ramaphosas, the Gordhans and Manuels are aligned. Don’t fight for jobs, a living wage, housing and decent services.

And of course Cosatu falls straight into the trap. They appear to have learned nothing from Polokwane. They simply jump from Zuma to Ramaphosa, the billionaire capitalist. He was not only the cheerleader behind the Marikana massacre. His fortune is intricately tied to big multinational corporations like Glencore. He is captured, but this time it is by a major agent of global capital. Once again Cosatu ignores the class interests of its members and backs a candidate of big business. The SACP denies it has yet followed suit, but it’s only a matter of time. 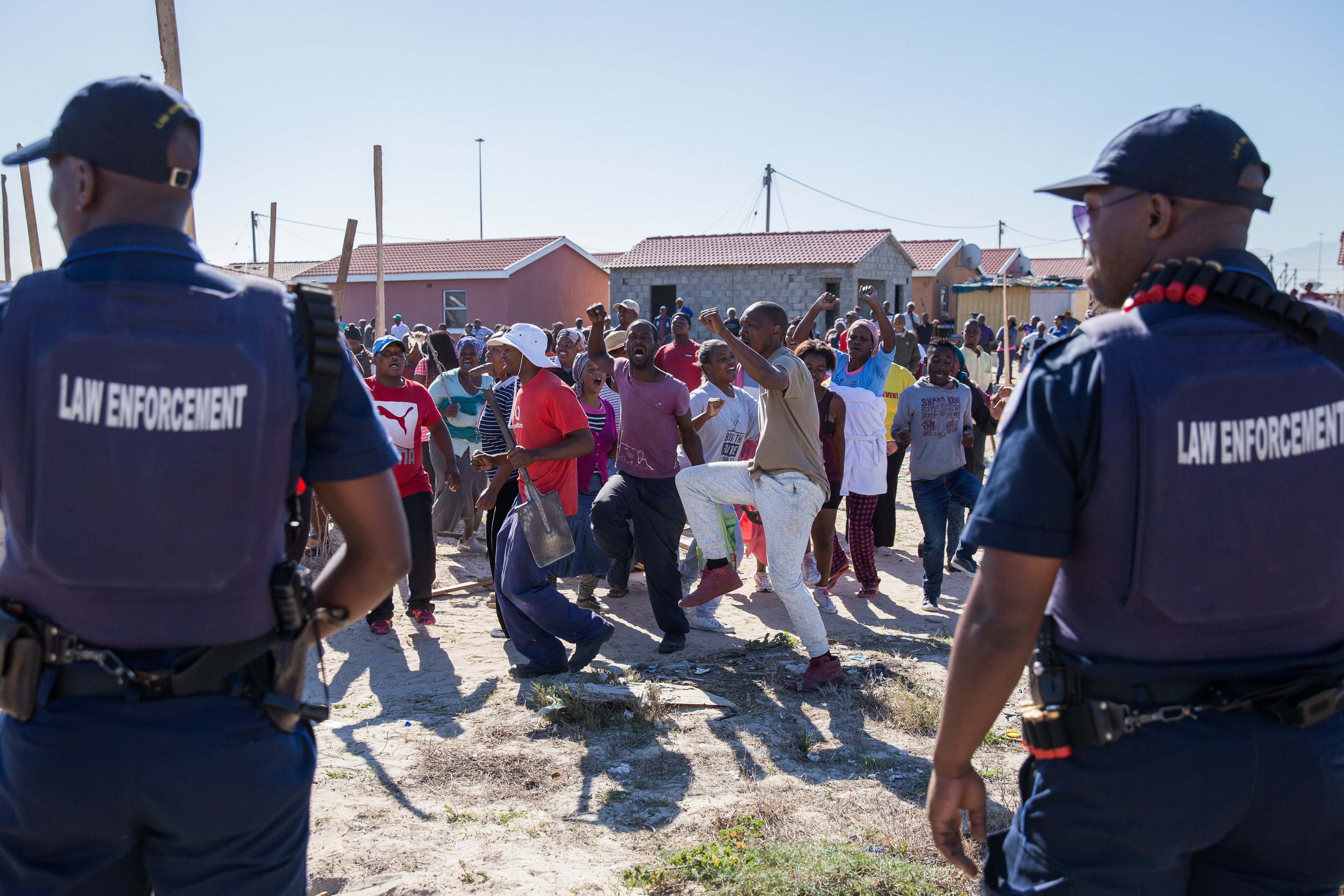 We reject this false choice. We cannot reduce our struggle to choosing between the Zuptas and the Ramaphosheimers. Only if you are bound by the dogma of the “National Democratic Revolution” can you see our options in such a narrow way. Only if you believe that we must allow old and new capital to fight it out, before we can get on with the struggle against capitalism itself, does this make sense.

In fact, while Zuma, Gigaba (Gigupta?) and their Zupta gang try to divert us with this nonsense, ordinary people are getting on with the real struggle for Radical Economic Transformation. In Khayelitsha, in Ivory Park, local communities have not been waiting for debates on clauses in the constitution. They have been occupying land. And what is the response of the ANC / SACP / DA governments? Violence and repression against those local communities.

Of course this is almost inevitable. Once the ANC / SACP has made the choice to fight over the spoils of capitalist exploitation, the rest follows as night follows day. The mass of people don’t accept the suffering they have been given. As the unemployment figures rise above 9 million, with no prospect of even slowing this increase, ordinary people protest against their conditions. “Service Delivery Protests” are in fact isolated uprisings against horrific poverty. If the government is unable or unwilling to meet these calls it has little choice – it must repress them That is why we have seen a constant increase in state violence against ordinary, poor people who are trying to achieve a radical economic transformation of their own.

This is the context for the recent focus on horrific violence being perpetrated against women. We cover it in this issue in our article on the recent #menaretrash Amandla forum. But while we share the shock and outrage of this coverage, we also insist that we must sharpen our analysis. We must make the connection with the levels of violence generated by the state, with the violence of the degrading poverty of people’s lives.

Nkosazana Dlamini Zuma spoke recently at a gala dinner of the SA Funeral Practitioners Association. She made clear what she thinks the land debate is about: “we must be careful because foreign people are coming to buy land. Before we know it we will not have enough land for the growing population of our continent”. Once again, her target is foreign capital, not capital itself.

We cannot afford to be seduced into support for one faction of capital against another. In the last 20 years under ANC rule, big mining and finance capital has used its power over the economy to undermine radical programmes of redistribution and transformation. ANC and SACP politicians were bought and co-opted. The price was to continue as the custodians of an extractive and deindustrialising economy. An economy which fails to grow, which exports jobs and which continues to exclude and exploit workers.

But, as we explained in our last editorial, we can’t afford either to stand back from the unfolding struggles. The extended political crisis contains threats to civil liberties and human rights; and it has huge social and economic consequences.

At stake is several billion rand of unnecessary and damaging expenditure on nuclear power, to provide a feeding trough for the Zuptas. At stake is the downgrading of the economy, now in recession, with the worst effects felt by the poorest people. At stake are the lives of women suffering from an increasingly violent society.

And of course there is everything at stake for the subjects of the Gupta emails. They must know that if their faction fails to win the leadership of the ANC at the end of this year, they are in serious trouble. Zuma might be able to escape to Dubai, but there wouldn’t be room for all of them. However much they use expensive lawyers to delay, they must fear that they would eventually face criminal charges. And prison cells. So they will fight hard and dirty for that leadership. 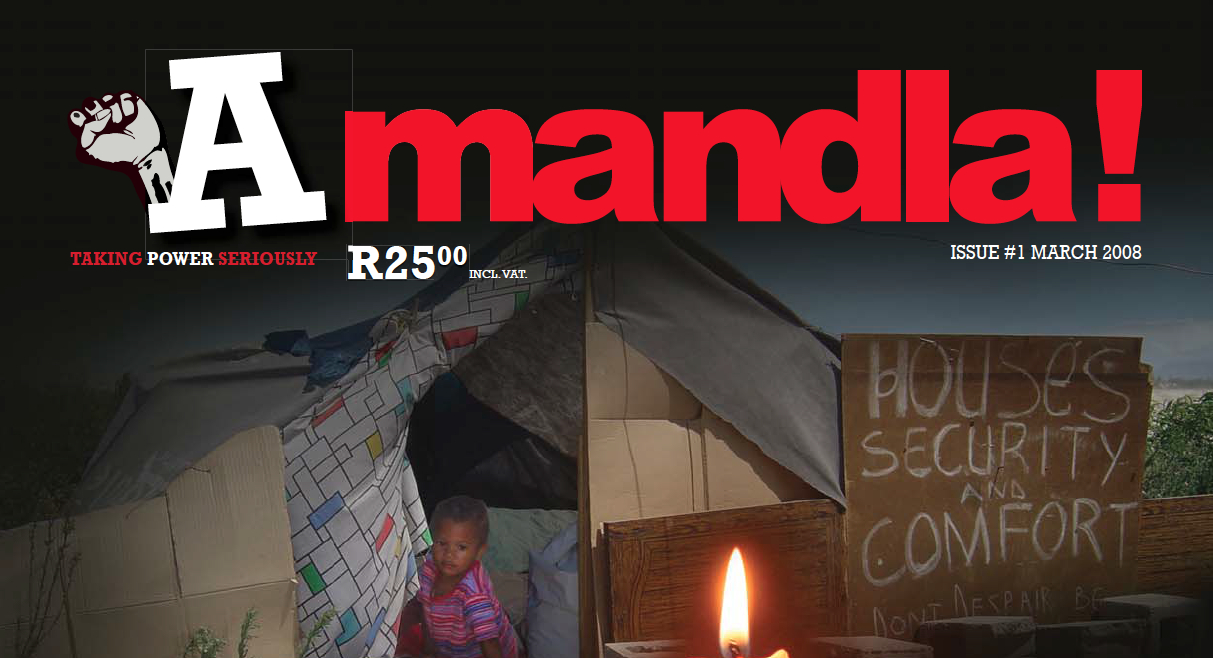 “The mass movements in SA would be wise to depend on their own independent mobilisations and campaigns to press home the demands of the working class and the poor, rather than wait for Jacob Zuma or anyone else to deliver to them. The very act of staking their claims, whether for decent houses, wages or jobs etc., builds organisation, creates higher levels of consciousness, solidarity, and, most importantly, a counter-power.”

This is what we said in the editorial of one of the first issues of Amandla, in March 2008, just after Polokwane.

It does not help that history has absolved us. The task remains. A way out of this cycle of poverty and violence can only be driven and sustained by a mobilised people. Land, especially urban land, has become a vital site of struggle. It is not demagogues with their ritualistic calls for “land expropriations with no compensation” that will make a difference. It is the actual organised occupations of vacant land by people who have no homes and who desperately need land.