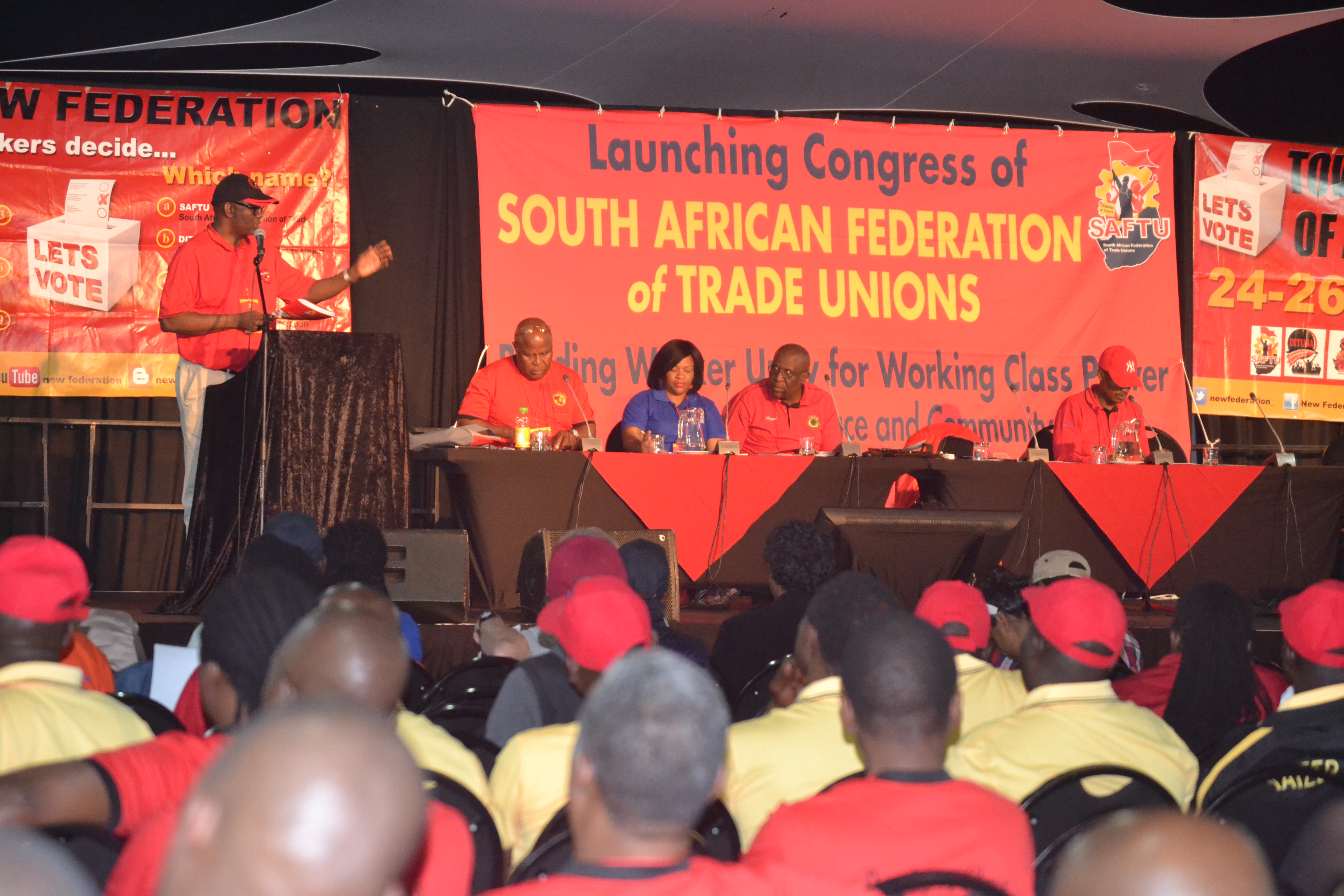 The long awaited launch of the South African Federation of Trade Unions (Saftu) in Boksburg on 27th April promises to be a voice for the growing numbers of unorganised and marginalised workers. But, as the Secretary of the South African Informal Traders Alliance (Saita) warned delegates at the launch, “don’t break our hearts with false promises”.

Many have become cynical over the idea of a new federation. It was conceived over two years ago in the wake of the expulsion of Numsa from Cosatu, followed by the dismissal of the Cosatu general secretary, Zwelizima Vavi, in March 2015. But the idea of a new federation is not the outcome of a surge in worker militancy. Instead, it is a response to the failure of existing unions to provide an adequate voice and service to its members. Saftu is the product of the crisis in representation facing traditional trade unions

The launch got off to a good start

Hope was in the air with over 1,800 mainly young delegates singing – rather hesitatingly – those stirring words from the Internationale, “We can bring to earth a new world from the ashes of the old”. The carefully crafted report of the Steering Committee, set up after the Worker Summit on 30 April 2016, made clear the intention to build “a broader labour movement, not a narrow trade union for wages of the employed”. The report promised that it will “give a voice and represent the workers employed by labour brokers…knit together the struggles of those who receive regular salaries and benefits with the struggles of the workers in the informal economy”, and struggle “hand in hand with unemployed workers”. 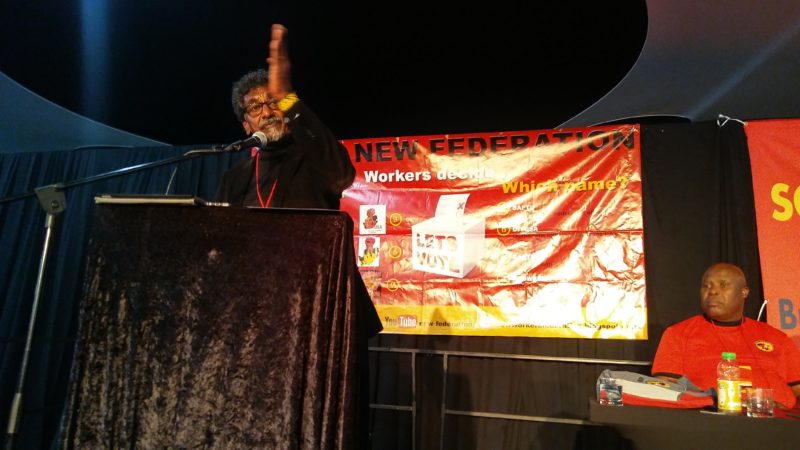 The opening day was a heady moment. All three past General Secretaries of Cosatu were present: the founder and first general secretary of Cosatu, Jay Naidoo (1985- 1999), Sam Shilowa (1993- 1999), and Zwelinzima Vavi (1999- 2015). Naidoo caught the mood of the delegates, with a combination of homage to the past with a call to grasp the new opportunities created by information technology. He argued that we need to replace fossil fuel capitalism with new forms of renewable energy. We need to harness the new technology, so that workers can, Naidoo romantically declared, become the “new creative class” with time on their hands for art, music and books to read”.

A strength of the federation will be its ability to combine the experiences of long standing union leaders with a new generation of unionists, disillusioned with the ruling party and its Alliance partners, Cosatu and the SACP. With nearly 700,000 members, it is the second largest federation in South Africa. But the challenges facing this attempt to “cross the divide” between organized workers and the growing precariat will require more than patience and the ability to listen. It will require a strategic leadership willing to move out of the comfort zone of traditional unionism, recruit unfamiliar constituencies and experiment with new ways of organising.

The first challenge will be to break with the bureaucratic practices that have seen union leaders gradually distanced from their members. With the exception of Numsa and Fawu, all the affiliates are either break-aways from established unions or small, often recently formed, locally-based unions. If past “business union” practices are to be challenged, then union investment companies and the gap between the salaries of some union leaders and their members will need to be revisited. There has been no systematic attack on income inequality in post-apartheid South Africa in spite of Section 27 of the Employment Equity Act that employers “must” address the “apartheid wage gap”. Despite this legal opportunity, labour has neglected this section of the Act. Saftu could make its mark within the labour movement by taking life-style issues seriously and, in particular, the wage gap within its own ranks.

The second challenge is around political diversity. What was striking at the launch was the wide range of political and ideological views. An illustration was the lively debate over the relationship between Pan-Africanism and Marxist-Leninism. But there was consensus that there should be no party political affiliation. It was agreed that Saftu should be politically independent, although there was a strong appeal for a workers party from one speaker. The challenge will be for Saftu to be a genuine forum for political debate, respecting different views, and even allowing different ideological factions to be institutionalised within the federation.

The most difficult challenge arises from the shift from industrial unions to general unions. NUMSA led the way when it extended its scope to include a variety of economic activities beyond metalworkers including, for example, university cleaners and bus drivers. Furthermore, many of the Saftu affiliates are general unions. How to deal with the danger of internal “poaching” was extensively discussed at the launch. Will the protocols proposed in the report of the Steering Committee prevent divisive conflict in the future?. As newly elected General Secretary, Zwelizima Vavi, pleaded: “Do not fight each other over the 28% already organized: Our challenge is to organise the 72% who are unorganised“.

A major challenge facing Saftu is the need for innovative strategies on new ways of organizing. It is not clear how Saftu intends to recruit the new constituencies of women, immigrants, low paid service workers, outsourced workers, and the growing numbers of workers in the informal economy. Experiments in organising precarious workers, such as the Casual Workers Advice Office (CWAO) in Germiston, need to be carefully examined as they could provide ways of crossing the divide between the old and the new.

Linked to the fragmentation of unions is what many delegates called the “big brother syndrome”. Do you continue with the past practice of unions voting on the basis of their size, or do you introduce the principle of equal votes between affiliates? This is likely to be an on-going debate as the federation tries to build unity between very different sized unions.

A difficult challenge is how to respond to the demand for “radical economic transformation”. On the one hand, Saftu endorsed the call for Zuma to resign but, on the other hand, they are equally critical of “post-apartheid deal making, deindustrialisation and financialisation”. It is difficult to detect any clear economic policy in the report of the Steering Committee.

The leaders of the new federation are confident that a number of Cosatu affiliates will join, or if the unions do not, their members will come across to a Saftu affiliate. To organize the low paid and the precarious is an ambitious task, but there is growing evidence that innovative strategies to bridge the informal-formal “divide” are emerging in the Global South. There have been successful attempts at collective organising of informal workers. Alliances are emerging and growing across this divide in other parts of Africa. An example of a new organising strategy in Ghana is an alliance of informal port workers with national trade unions. Through the alliance with the national union, the local union of casual workers gained the necessary political status to improve their working conditions.

Labour scholar, Rina Agarwala, has challenged the conventional view that informalisation is the “final nail in the labour movement’s coffin”. Informal workers in India, she demonstrates, are creating new institutions and forging a new social contract between the state and labour. She shows how informal worker movements are most successful when operating within electoral contexts where parties must compete for mass votes from the poor. Agarwala calls this “competitive populism”. These informal worker organisations are not attached to a particular party, nor do they espouse a specific political or economic ideology.

It is too soon to pronounce on the future of Saftu. But what is clear is that increasingly workers are rejecting traditional trade unions and forming new types of organisations that bring workers together to promote their rights and interests. Saftu needs to draw on these experiences if it is to fulfil the promise of its launch.

Edward Webster is professor emeritus in the Society, Work and Development Institute (SWOP) at Wits University. He will be launching next month a collection of research-based essays on precarious work in India, Ghana and South Africa, Crossing the Divide: Precarious Work and the Future of Labour, Edward Webster, Akua O. Britwum and Sharit Bhowmik, University of KwaZulu-Natal Press.