Intersectionality has become a “master” concept in progressive circles today. With origins in critical legal studies in the USA, it has quickly spread across the globe and found a home in popular consciousness in South Africa largely due to the success of the student movement.

Intersectionality has a powerful heuristic, descriptive and political organisational value. However, I think that making a distinction between intersectionality as an “analytic sensibility” (as Kimberly Crenshaw put it) and the “theories” that people bring with them to the table when confronting oppression, is crucial for those interested in achieving social justice.

I believe that a materialist approach to intersectionality is superior to a growing current of culturalism and identitarianinism infiltrating academic and activist spaces. 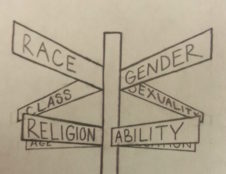 Intersectional criticism demands that researchers and activists attend to the fact that oppressions are multiple and interlocking. Yet it does not provide a theory for how the various nodes of oppressions it identifies- race, class, gender, sexuality- work.

Let us take the question of race.

A materialist theory of race holds that the Atlantic slave trade and European colonial adventures, provided the rationale for the institutionalisation of racial ideology and white supremacy. The emergence of capitalism was crucial to the emergence of racial difference. Since then, race has been a social construction that has evolved within a set of social relations anchored to a particular system of production.

A materialist analysis is concerned with demonstrating how “race” and racial inequalities have been reproduced in concrete social formations by unpicking how racialisation is supportive of class formation.

In a similar vein to the race-class nexus, materialist feminists are concerned with illuminating how capitalism has been historically supportive of patriarchy and the oppression of women. For examples of this see the work of Claudia Jones, Selma James and Angela Davis.

Historical evolution of race and class

It is worth stressing that the interaction between capital and race [and gender] is in motion. That is to say that the relationship between race-thinking and class formation will differ depending on the historical setting. Racism has coincided with and reinforced proleterianization through most of the history of capitalism. A fight against racism has thus largely coincided with class struggle.

However, in recent years, racial self-assertiveness and race thinking has been used as “currency” by an emergent black elite to clear pathways for upward mobility. Race thinking, therefore, has begun to coincide with a bourgeois class formation.

We only need to think of BEE, a policy that has enriched a few black elites while further contributing to the alienation of the black labouring class in South Africa. BEE’s narrow race-based justification should be a cause for alarm for progressives. Indeed, all socialists in South Africa distinguished between “bourgeois” and “radical” nationalism in the struggle against apartheid. A material distinction between a national bourgeoisie and the masses in the post-colony is also the analytic pivot that animates Fanon’s “Pitfalls of National Consciousness.”

Is it class reductionism?

There is certainly a history of socialists failing to appreciate how the conflict between capital and labour is overdetermined by race and gender oppression. In South Africa, members of early Marxist movements were reprimanded by both the CPSU and Trotsky for their failure to embrace the colonial character of capitalist oppression in the country (the CPSU and Trotsky had different political programs emerging from the same insight, with the CPSU demanding a stagist Black Republic Thesis and Trotsky for national liberation in terms of permanent revolution).

Yet dismissing the rich history of materialist thinking about class-race-gender is rather unfair. Marx himself was deeply interested in racial justice as his writing on the abolitionist movement and English racism to Irish workers demonstrates. Among African Marxists there has never been a moment in the history of Marxist scholarship that race has not featured centrally. These theorists grappled with how to understand the relationship between racial and class oppression, the nature of racial, ethnic and class consciousness and its implications for trajectory of anti-colonial and anti-apartheid struggle, and the foundations of white racist rule from colonialism to apartheid. They disagreed with one another about how to answer these questions, but they agreed that the best way to approach them was with a materialist analysis of society.

Despite the rich history of Marxism in South Africa, it is not readily associated with intersectional criticism today. In most cases, intersectionality is approach with an “identitarian” and “culturalist” framework. The latter theories actively denounce the purchase of political economy, Marxist or otherwise, in understanding how oppression works. This is a view shared by those who follow postcolonial and decolonial theory.

Within the culturalist identitiarian framework, oppressions are rooted in a particular “epistemology” or “way of being”. This can be labelled “Western” or “white” or “male” as opposed to “African,” “black” or “female.” The world, and the oppressions within it, are seen not as being intertwined with forms of capital accumulation and material exploitation, but rather as rooted in the dominance of particular perspectives or discourses that “other” or “marginalise”.

The idealist view of oppression coupled with a suspicion of reason, empiricism and an embrace of cultural and moral relativism, in fact places materialist traditions into the role of oppressor. Marxism and progressive liberalism, both with their sources in a supposed white-male European episteme, a charge base on their shared insistence that universal categories can comprehend diverse social systems, are supposedly inherently violent impositions and residues of colonial dominance, intruding on “marginalised” ways of knowing that should be given free voice to speak for themselves.

Culturalist thinking, particularly as it is represented in the arguments of the Subaltern School, is taken up by Vivek Chibber in Postcolonial Theory and Specter of Capital. Chibber’s work demonstrates that central postcolonial claims and suspicion of reason, objectivity, and moral universalism, are empirically and conceptually flawed.

Chibber shows that materialist categories of analysis are as fruitfully applied to the non-West as they are to the West. Although people come from different cultures, have different cosmologies, different histories and so on, people are still, frankly, people, and fight to protect their material interests when these are threatened.

A sociology beginning off this “universalist” principle will produce different results depending on where it is applied- the results one gets when examining South Africa in 2018, with its distinct cultural history, will differ from the results one might get when examining France in 1850. But homogeneity in outcome was never expected anyway.

I also concur with the view that the culturalism framework of postcolonialism risks providing ideological cover for right-wing ethnic, racial or religious narrow nationalism.

This is not to say that culture is unimportant for materialist analysis and for political movements aimed at realising social emancipation. The problem is when the conversation about culture becomes detached from an effort to link cultural reproduction to capitalism and material exploitation. This was a trend that Stuart Hall, the founder of cultural studies, bemoaned towards the latter part of his career.

Yes to intersectionality, no to culturalism and identitarianism

To conclude, intersectionality is a powerful call for us to think holistically about oppression. But it only takes us half way. We need to interrogate the explicit or implicit theoretical tools by which we understand our social world and the oppressions within it. Materialism in general and Marxian political economy in particular, in my view, presents a powerful means to do just that.

Posted in AIDC Tagged with: intersectionality