Crisis of Politics – Politics of Crisis

The Alternative Information and Development Centre (AIDC) together with the Transnational Institute in the Netherlands, as part of the New Politics Platform, hosted an international conference on the crisis of politics and the politics of crisis. The conference will take place from 16 – 18 March 2017.

The conference will bring together 60 – 70 activists and scholar activists from around the world with many years of experience in movement building and with deep insights into the challenges facing the left today. The conference will also bring into dialogue a series of similar initiatives and platforms including, the New Politics Platform, Systemic Alternatives (https://systemicalternatives.org) Intercoll (http://intercoll.net) and the People’s Dialogue.

The focus of this conference will be less on diagnosing the nature of the multi-dimensional global crisis that is rapidly unfolding but more on strategies for resistance, deepening alternative perspectives and strategies for building a counter-power capable of challenging the decaying system that is threatening life as we know it. 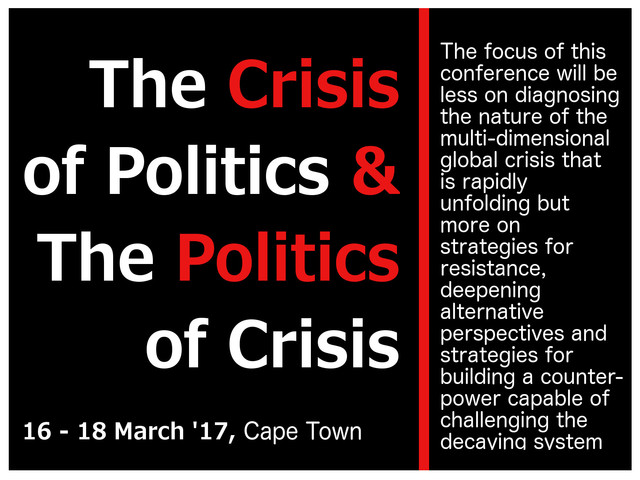 Clearly emancipatory projects are forced to undertake deep reflections on the current situation. The rise of the right and the collapse of a series of significant left projects, not least the left-wing governments in Latin America as well as the failure of the Syriza project, bring the issue of strategy into central focus. The election of billionaire Trump, a right-wing populist, as President of the USA, together with similar right-wing populist forces in Europe makes our rethinking and renewal of emancipatory politics that much more urgent.

Clearly, the crisis of politics has its roots in the profound changes that have taken place within the capitalist system. Neoliberalism, the globalisation and financialisation of the global economy, together with a changing global division of labour, have shaped a new geo-political balance of forces redefining both opportunities and challenges for radical transformation. The multiple nature of the global crisis, being at once an economic, social, political, ecological, energy and food crisis as well as being civilizational in its dimension, has given rise to new struggles and new agencies.

The crises intersect and reinforce each other and redefine the role of the nation state. Of course they remould social classes, pauperising and marginalising some, while elevating and co-opting others. They also profoundly redefine questions of identity and culture. Mass unemployment, precarious forms of labour and reduction of the weight of the industrial proletariat in the context of globalisation redefine urban and rural spaces, restructure the reproductive role of women and bring into sharp relief our environment and the human species’ relation to the biosphere and nature in general.

Hence, emancipatory projects are confronted with a series of new questions to which there are few clear cut answers and certainties. Traversing these challenges, while at the same time building a new political project in a divided and polarised society like South Africa, which itself has undergone dramatic change, is difficult. Doing so in a context of fragmented isolation, with little dialogue and interaction between different initiatives, will, at the very least require time and attention to intellectual work. The depth of the crises we face makes everything urgent and undermines the time needed for theoretical and intellectual work.

This in part constitutes a significant element of what we refer to as the crisis of politics.

Furthermore, the crisis of politics refers to how the solutions (left political programmes) hardly match the changed realities we face. Clearly the power of globalised finance capital, and its capacity to disrupt national economies, makes taking power and implementing radical reforms very difficult, outside of a generalised confrontation with capital nationally, regionally and globally. The asymmetry of the military power of imperialism makes such confrontations look like suicide missions. If you are Venezuela, Ecuador, Bolivia, Greece under Syriza, you are caught in a catch 22 situation – doomed if you do and damned if you don’t.

The conference is thus confronted with many critical questions. We have decided to organise these around the following nine themes:

Inputs will be in the form of 10 minute provocations to stimulate discussion and debate. Following the conference these inputs will be developed into papers that will be published as part of the New Politics Platform’s ambitious programme of knowledge production.

The conference will be proceeded on 15 March by several workshops co-ordinated by local formations in conjunction with visiting conference delegates. These include: