These relate, in the first instance to the ability of the student movement to hit at the Achilles heal of the government, namely its commitment to austerity and neoliberalism which it challenged head-on by its demands for free quality decolonialised education. This was reinforced by the building of a powerful student-worker alliance around the demand for in-sourcing that went to the heart of government’s neoliberalism. Equally in my opinion was the ability of the student movement to unite students from different political viewpoints and organisations. But perhaps most significantly this was a new student movement with a new politics that challenged racism, sexism, patriarchy and capitalism with the breadth of its demands and ideology.

The student-worker alliance was a raging fire – proving the might of a united front, unfortunately the fire burnt out too soon. Nonetheless, the movement won many victories but there were a few who felt that the war was not over. It can be argued that one of the major demobilising factors was played by the Progressive Youth Alliance (PYA), consisting of the ANC Youth League, the Young Communist League (YCL) and the South African Student Congress (SASCO). Their celebration of the 0% fee increase – announced by Blade Nzimande (minister of Higher education and General Secretary of the SACP) – intentionally derailed the fees must fall movement and has effectively put back the struggle for free education. Their distancing from the struggle made it easier for the state and university management to repress the student movement, through suspensions, interdicts and expulsions.

In February 2016, Pravin Gordhan, in fear of the unelected but all powerful credit rating agencies, implemented an austerity budget; a decrease in public spending in real terms, while at the same time announcing alleged big increases to fund higher education. This was a big lie and a simple manipulation of the public’s lack of understanding of public finance. Instead of the reported R16,3 bn for higher education it grew by just R3,4 bn at the expense of other sectors of education and far too little to meet the demands of students. Now that the government believes that the student movement has disappeared it is about to announce fee increases to meet what universities say they require just to meet inflation related increases in expenses.

University management cry that they are stuck between a rock and a hard a place; The Government at one and the same time expects universities to constantly increase their student numbers while constantly giving them less and less money. This is the nexus of the current student upsurge and uprising. Students refuse to be limited and constrained by the restraints imposed either by government or the universities. They do not operate in that frame.

In South Africa we do not face constraints of money. Where there is political will money can be found. Take for example, the financing of hosting the world cup. The government had no problem financing stadiums and other infrastructure that are nothing more than white elephants. 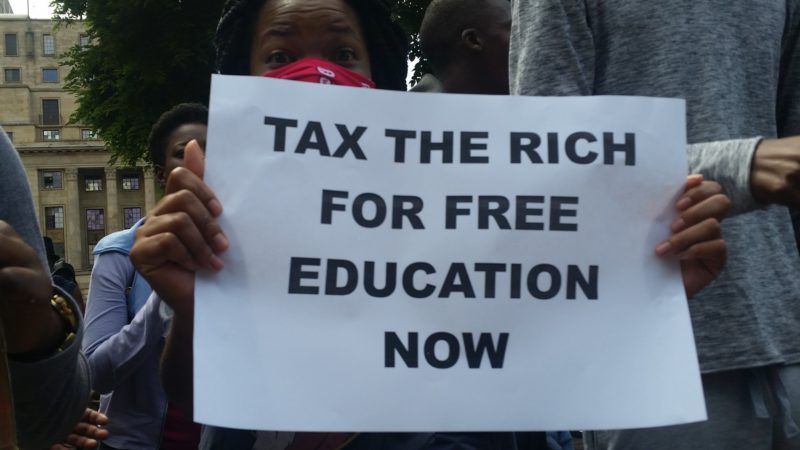 In the first instance money for free education should be obtained by taxing the rich. It is a complete myth that the rich and middle classes are over-taxed. Since 1996 when the neoliberal GEAR macro-economic policy was implemented government set a conservative ceiling of tax to GDP of 25%, whereas this could easily be lifted to 33% as is the case in many so-called developing counties. This alone could liberate billions of additional funds to meet demands for financing free higher education, a national health insurance, scheme and creating decent work for the millions of unemployed.

Furthermore, from recent reports released by the United Nation Conference on Trade and Development (UNCTAD), indicates that billions of dollars leaves South Africa’s illegally every year due to the accountancy tricks of commodity exports. From the UNCTAD study, platinum and silver were under invoiced by $2.3 billion between 2006-2014 and, in fact, a further $2.3 billion between 2000-2005.

Underinvoicing within SA’s gold sector is even more staggering. Total misinvoicing of gold exports to South Africa’s leading trading partners was $113.6 billion over the 15-year period – the UNCTAD report characterises this as nothing less than gold smuggling.

At an average exchange rate over this period of R9 per dollar, this corresponds to over R1 trillion – 1 trillion Rand pays for free tertiary education for at least the next generation. By stopping just this smuggling by people seen as the ‘great and good’ amongst us, free education becomes entirely affordable.

All this money can and should be used to finance tertiary education as well as meet the development needs of a society through a state driven development of renewable energy infrastructure and a mass housing and public transport project. Combatting the financial shadow government (credit rating agencies) and challenging their hegemonic power. These development policies, together with control over speculative capital flows are the means by which we can progress into a more human society.

So free education is possible but what does free education mean if we live in shacks on empty stomachs. Even if we get into these institutions we are often bound to fail because our basic needs are not met. Importantly we do not only want to be able to access these spaces (like universities) but we also want to deconstruct the power relations in these spaces and in doing so reclaiming these spaces, breaking down the walls of the ivory tower. 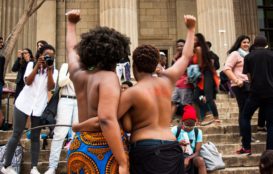 Earlier it was mentioned that there were a number of victories gained by the student movement but there were also many important contributions. One of it being the need to challenge gender oppression in a patriarchal society.

I think that recognising patriarchy and racism as inherent forms of oppression is key – but how do we change it? I am not sure – perhaps it will require something like the united front of students and workers that happened on the South African campuses. A student, worker and community alliance.

We are living in a time of staggering unemployment, inequality and poverty – on the brink of an ecological disaster, we need to do something. And we must remember that we cannot realise an anti-sexist and an anti-racist society in a capitalist system.

Written for Pathways to Free Education booklet published in August 2016.