A Burning Bus: Are we headed for Marikana Mk II?

I abhor violence but I’m not a pacifist. Violence has its time. Monday’s violence was predictable. It was like a weather front moving gradually from Wits to Braamfontein. When it came it was like watching a game of rugby between the police and the protesters. It looked like many of those acting violently were having fun, it was obvious on their faces. There was no sign of politics.

On Monday police violence on the campus at Wits University drove student protests into the centre of Braamfontein. As a result, for four hours the conflict played out on the neighbouring streets.

Several students involved in lawful and legitimate acts of freedom of expression were injured. A Catholic priest was violently and deliberately shot in the face by police. Bystanders, workers and commuters became the targets of indiscriminate rubber bullet fire.

But in addition, a public transport bus was hijacked and burned; a clothing and shoe shop was looted; cars were deliberately damaged; bystanders had rocks hurled at them, several individuals were turned upon by a mob.

I expected the former from the police. I was troubled to see the latter from the protesters. Such acts tarnish the students’ cause of winning the right to free quality tertiary education, a cause that we should all support and identify with.

Let me start by telling you what I witnessed of the police.

Actually, I did not see any real police. I saw a disorganised, undisciplined group of people with the advantage of armour and weapons. There was no sign of public order policing or of any strategy on the part of our police.

Occasionally men in blue uniforms with bulletproof vests, helmets and shields, would rush down the road, jump out of Nyalas, shoot rubber bullets randomly and then retreat again. There was no attempt to protect protesters, pedestrians or property. There was an inevitability about looting because shops at the crossroads of Melle and De Korte streets were left unprotected despite this obviously being the epicentre of the day’s conflict.

Frankly, our police don’t appear to know how to exercise their constitutional duty.

I say our police deliberately – because we own them. They exist, according to the Constitution, to “prevent, combat and investigate crime, to maintain public order, to protect and secure the inhabitants of the Republic and their property, and to uphold and enforce the law”.

The fact that they don’t know their duty has been evident for some time. They were good at arresting 130 middle-aged women care workers protesting at their dismissal in the middle of the night in Bloemfontein. They seem willing to accept unlawful orders to open fire in Marikana and other places thought out of sight. They keep the nation safe from crime at crucial moments like … the World Cup. They drive our highways escorting politicians with blue lights.

It is clear that we have a crisis in policing.

All of this we agree on and must fix. But some argue that in the context of this pattern of police violence, yesterday and before, random student violence was and is necessary. It is the “smoke that calls” the attention of politicians – words used by Karl von Holdt in his and other researchers’ groundbreaking study of township service delivery protests. The violence is “bringing black anger into centres of white power”, say some of my colleagues. 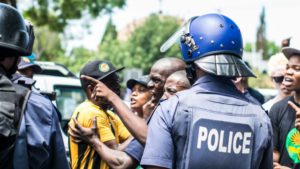 We are all in debt to the #FeesMustFall movement. We ought to concede that the ways, the language, the practice of older generations of social justice activists have not as yet succeeded. I respect that students are searching for something new and in new ways. We must be big enough to see this, to step back and accept young people’s leadership, opinions and assessments. But we can still bring some wisdom, experience and protection to this struggle.

So, on the question of violence: I abhor violence but I’m not a pacifist. Violence has its time. Sometimes it is provoked. I salute most of the violence of the 1980s, a violence that came when our freedom struggle had run out of other options, a violence that made apartheid unworkable and our country ungovernable. I agreed with the rooting out of informers and impimpis from our townships. The burning and looting of shebeens and bottle stores was necessary. They were symbols of apartheid. A leering insult. “Stay Calm and Get Drunk” they might as well have said. The stones and occasionally the bullets that responded to the arms of the police were all we had then to fight back.

On another continent I was on the edges of the 1981 Brixton Rising by black youth in England. After sustained police violence and harassment, culminating with the arrest of Michael Bailey, on April 10, 1981, young black people rose up and torched their ghetto in London. The liberating power of that violence was celebrated by the great poet Linton Kwezi Johnson (LKJ) in poems like The Great Insurrection. In ’Tings and Times LKJ captured the mood of those days calling them “despalfirote days of defiance”:

However, that was not the violence I witnessed on Monday. Monday’s violence was predictable. It was like a weather front moving gradually from Wits to Braamfontein. When it came it was like watching a game of rugby between the police and the protesters. It looked like many of those acting violently were having fun, it was obvious on their faces. There was no sign of politics.

There was no sign of anger. Ironically, that was what was scary.

Anger sometimes justifies violence. But I had to ask myself what this aimed to achieve? When a bus said to belong to Gauteng Women in Transport, an NGO, was commandeered, stoned and set alight, what was the objective? It didn’t frighten anybody. It will probably cost at least R500,000 to replace. That money won’t be taken out of Adam Habib’s salary, or Blade’s pension fund. It won’t be missed in Sandton where people don’t need buses. It won’t be missed by young privileged wannabe revolutionaries and social media loudmouths, people already on their third car and fourth degree, already on salaries that locate them in the 1%.

But it will be missed somewhere. Public transport will be denied to somebody who has a real need. The R500,000 needed to replace it means that somebody may die for the sake of that little bonfire.

I ask myself why leaders are not acting to stop the violence? I will put my body in front of the police and risk their violence for the cause of free high quality basic and higher education and for many other social justice causes. But when I do I would like to know that our violence will only be used if justified. Revolutionaries and activists must occupy the moral high ground. The student movement must win – not alienate – public support.

The students could have taken over Braamfontein without violence on Monday. The phalanx of NGO workers who share Braamfontein should have joined them. The call could have been “Occupy Jorrisen St”! “Support the struggle for free quality education!” Instead the violence kept many of us indoors.

I am fearful of those who crow about “revolutionary violence” to earn their credentials. Those who crow loudest are often those who are safest, already secure in their eliteness.

I am also somewhat fearful about writing this article because it will be mischaracterised. But I do so because if you watch the award-winning film Miners Shot Down you will see that there was a point several days before the Marikana massacre when a mass killing of some sort became inevitable. All the “official’’ leaders of business and most trade unions had vacated the scene – leaving the workers to fend for themselves on the koppie. Leaders who would have had to risk populist ire by stepping in and seeking a compromise, stepped out. Do we want a similar thing to happen to students now? What did Marikana achieve? Most activists have now deserted the mineworkers, their families and their cause. But the miners still live in shit, still earn a pittance, still die in accidents.

So let me ask. Do we want another Marikana?

Not in my back yard. Not if I can help it.