’76 reloaded: Students on the march 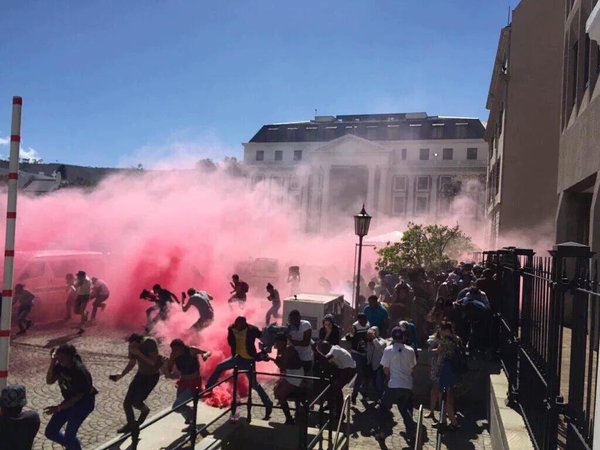 It is one year since the students of Cape Town stormed the gates of Parliament, demanding that university fees fall and that universities end outsourcing at these institutions. This article was written by an Amandla correspondent and published in Issue 43/44 of Amandla. Issue 43/44 (December 2015) is a double issue with a special feature on the student uprisings and outsourcing at universities. Lets take a moment to remember the significance of the FeesMustFall movement of 2015.

’76 Reloaded: Students on the march

The students achieved in just a few weeks what COSATU has failed to achieve in almost 20 years – the insourcing of workers at several universities. Despite this, the significance of the re-emergence of a radical student movement will only be fully comprehended in years to come.

Several things make the FeesMustFall (FMF) movement unique, not least its national breadth and its capacity to unite a wide range of movements under one banner. Most importantly thousands of students have been drawn into struggle and political activity who have never been politically active before. Suddenly, they are engaging in discussions way beyond student fees: the politics of race, capitalism, feminism, LGBT I and intersectionality are forming a new generation of activists and intellectuals. 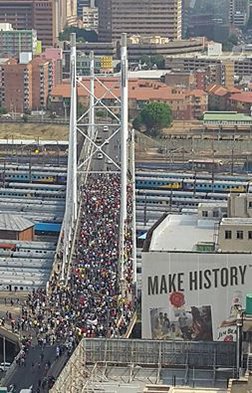 Even the end of year examination period has not been able to extinguish student mobilisations. Struggles continued at several universities after the victory of zero fee increases. Not unexpectedly there has been a substantial demobilisation since exams started and since the ANC leaned on its youth formations to go backto class. Nevertheless, this movement is not finished by a long shot. In the coming period we can anticipate a renewal of radical student politics, which will feed the broader movement against inequality, for economic freedom and social justice.

A national movement is being born and in the new university year we can expect further mobilisations for free quality education and for insourcing of workers. The historic nature of this movement is well captured by the photo of thousands of students crossing the Nelson Mandela bridge alongside a billboard declaring MAKE HISTORY .

On 22nd October 2015, thousands of students marched from Braamfontein in Johannesburg to Luthuli House, headquarters of the ANC located in downtown Johannesburg. Sandwiched before and after this march were the marches on Parliament and the Union buildings. Apart from the trade union movement, with its incomparable financial and institutional resources, no movement since the achievement of democracy has had the capacity for such audacious mobilisation or had such an impact on national politics.

The target of these marches was the government, not in a general or abstract sense, but specifically the government of the ANC. This is what can be inferred from the march on Luthuli House and the humbling of the ANC Secretary General, Gwede Mantashe, who was made to accept the students’ memorandum without being allowed to speak. In this event, the students were signalling a political rupture with the ANC. As former Wits SRC President Mcebo Dlamini told the marchers: “We are shutting the Union Buildings tomorrow. The honeymoon in 1994, when we were told we are free, is over.”

This was well understood by Mantashe and his comrades in the leadership of the ANC. Realising that confrontation with the students ran the risk of permanently alienating the ANC’s youth base, the ANC initially tried to co-opt the movement. In a rapidly-convened press conference after the historic march on Luthuli House, Mantashe announced: “We have called on ANC members to join the march of students to the Union Buildings … (T)his should not be seen as a march against the ANC”. But the hostility of thousands of students who marched on the government prevented President Zuma from addressing the students and winning some glory by announcing the zero fee increase.

But in many respects FMF was against the ANC and their failure to implement free education, a key demand of the Freedom Charter and one of the resolutions adopted at the ANC Polokwane Conference of 2007.

For Nzimande, the FMF was particularly awkward. Not only did it expose the hollowness of the SACP’s claim to be the vanguard of the working class, it exposed the bankruptcy and opportunism that lies behind the SACP’s role in the neoliberal ANC government.

At a personal level, for Nzimande, the student struggle has been humiliating. At the height of the student mobilisations for free education it was revealed that he had failed to make public a 2012 report, Free University Education for the Poor, that supported such a call. Even more embarrassing , and an indication of the bankruptcy of serving in the government, the budget for higher education has been cut during Nzimande’s term as minister, at least since 2011.

As a means of diverting attention from the responsibility of the government to fund higher education, Nzimande has been calling on the private sector to help fund higher education. Nzimande often accuses the EFF and other left forces of being populist. What is more populist than invoking the private sector as the appropriate target for students’ anger, when his government refuses to tax business and the rich so that the state has the resources to meet the needs of its citizens.

Adding insult to injury, Nzimande asked delegates at the COSATU congress “Why can’t we, as an alliance, campaign together to get the private sector to fund higher education?” Why indeed? The answer lies in the reality that Nzimande’s government has been giving large tax breaks to big business and the rich, almost from day one.

The dilemma for the ANC, and even more so for the self appointed vanguard of the working class, the SACP, is the knowledge that the campaign for free education will continue in the new year and is likely to be radicalised and more strident in its critique of government, the ANC and the SACP. Just as the EFF has pulled the rug from under the feet of the ANC Youth League, the FMF campaign has compromised the dominant role of SASCO and the other youth formations that make up the Progressive Youth Alliance (PYA).

Student Power:
What must not be misunderstood is that SASCO and PYA have played a significant role in the student mobilisations for free education and against outsourcing of workers. But they have been doing this in a situation where SASCO’s dominant position in many campuses has been waning.

Ironically it was Wits vice-chancellor, Adam Habib, who recognised this before the uprising started when he said that it was “simply a matter of time before students started to look for alternatives to the ruling party-aligned South African Students Congress (SASCO) associations, which have allowed intra-party battles to overshadow student interests.”

The alternative took the form of united front structures that brought all student formations together on campus under the banner of FMF, regardless of political affiliation. SASCO and the structures of the PYA have had to subordinate themselves to FMF. And when it did so, the 2015 student movement was at its most creative and most powerful. Like in the past it quickly spread nationally to most campuses around the country and was able to invoke the legacies of the 1976, 1980 and 1984 student struggles.

The national breadth and unity of the students gave it its power and ability to inspire other sectors of society. Almost every ill was coined into something that must fall. In Khayelitsha, unemployed people occupied supermarkets demanding “bread prices must fall”.

Student worker alliance:
A key aspect of the significance and potential power of this movement is the forging of a student worker alliance around the demand for insourcing of university cleaners and security. The power of this alliance can be seen in just how quickly several universities had to concede the demand and enter into agreements with protesting students and workers to begin to reverse outsourcing in 2016. In fact, the insurgency of students at the University of the Western Cape forced the university management to immediately grant an additional R1,000 to all outsourced workers, pending insourcing.

Of course there is a clear link between the students’ demand for free quality education and insourcing. Outsourced workers cannot afford to 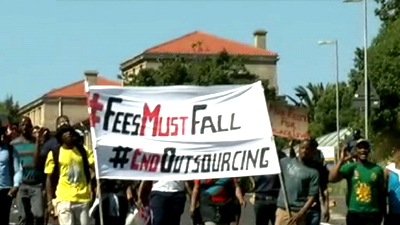 send their children to university. They see in the students’ struggle the possibility that their children could escape the ghetto. Insourcing will immediately qualify workers to take advantage of free university education and rebates for their family members.

By integrating the struggle for free education and insourcing, students have constituted a power that university management have found difficult to resist. Workers’ power at the workplace is compelling. Linked to mobilised and radical students it is a major force that is able not just to decolonise their universities but to act as the inspiration to forge an even wider alliance of workers, students and communities.

This generation of students is certainly making history as did the 1976 generation. It is just possible to see its significance in cementing a generalised movement for the “uhuru” that has not yet emerged.