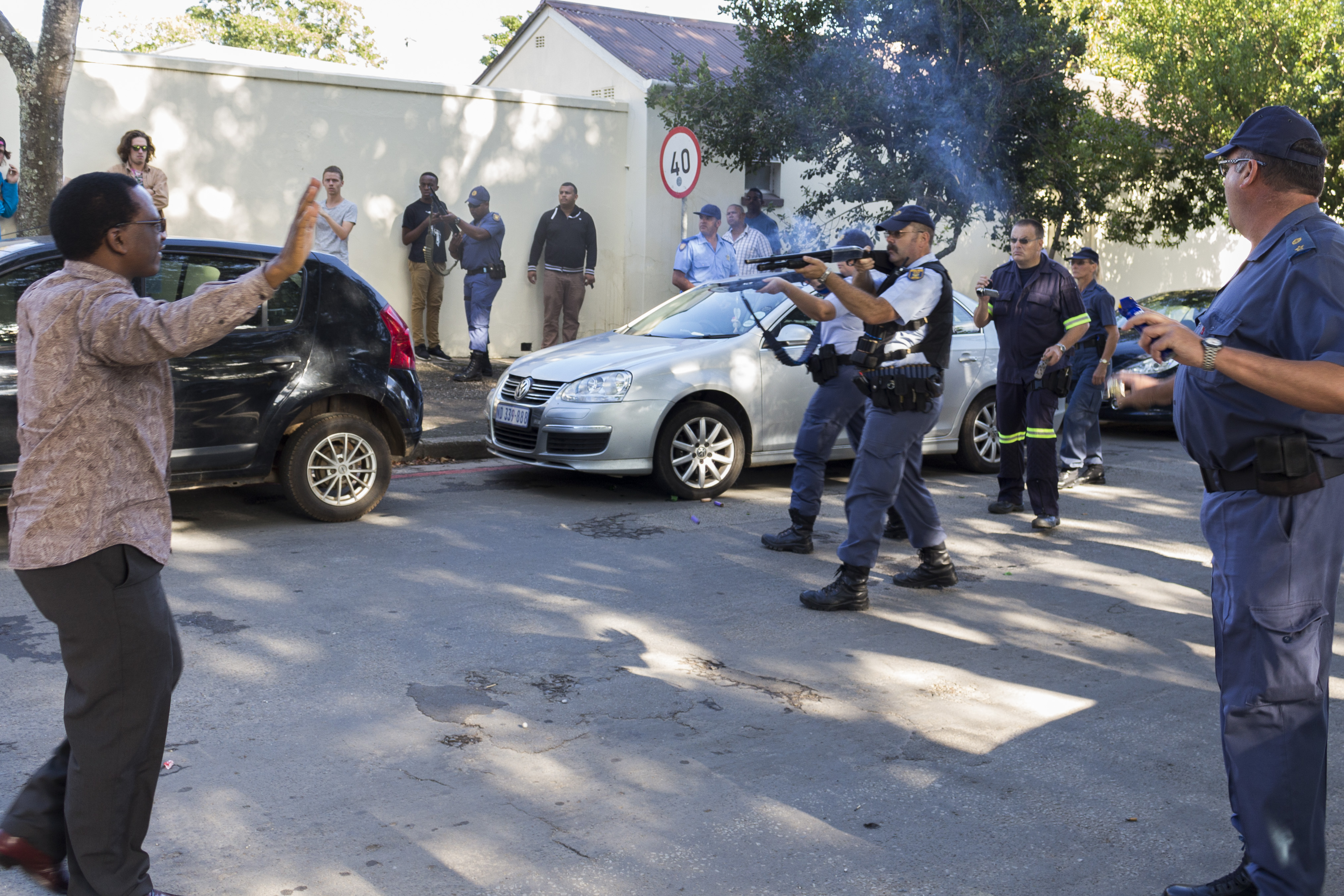 We were met with repeated repression – arrests and violence.

As I sat down to write this article, news of police moving in to squash protest at Cape University of Technology (CPUT) had just blown up over my social media. These were not #FeesMustFall protests exactly. CPUT students were protesting the lack of adequate accommodation. The running battles captured on cellphone cameras brought back memories of stun grenades, tear gas burning my nostrils, the rubber bullets zooming past. Here at the University Currently Known as Rhodes (UCKAR), those of us who were active in protest last year look at each other with a mixture of shame and hope – what do we do comrades? Have we accepted that the fees will not fall? What has happened to us?

Effects of violence
Perhaps the answer is as simple as “we are scared”. The brutality we were met with last year has  made us think twice about protest. Who wants to get shot? Who wants to get arrested and face the court system? Protesting, #FeesMustFall style, seems to mean shutting down the university and disrupting lectures. Definitely at UCKAR, these tactics were peacefully implemented at first. Students would call for a shutdown and then go around to various lecture theatres, dining halls and residences appealing (if at times robustly) for all those involved to cease and join the assembled students.

When we were met with repeated repression – arrests and violence – a few turned to burning or confronting the police. For many, these tactics are neither desirable nor effective. Risking your academic progress and arrest or physical harm make many think twice. I certainly have my doubts about whether I want to “risk it all”. Whenever students gather these days, the police are immediately called in. Riot gear and shot-guns ready. During registration, students were not allowed to register without signing a form acknowledging that they would be summarily suspended if allegations of “disrupting the normal functioning of the university” are made against them. The result is that our university restricts rather than protects our right to protest.

Another way?
This does leave us with a question though: are the shutdown and disrupt tactics the only way to “do things”? Are there other ways of taking forward the cause that would appeal to those students who want to join but are afraid of the consequences? If there are, students have not spent the time since the beginning of the year thinking about them, at least not at UCKAR. The neo-apartheid state, and the university managers who are appointed by that state, cannot be expected to do anything else but protect the dominant interests in the country. That means that repression in all its guises should be expected and planned for. It is for students, those who are serious about breaking the stranglehold of neoliberalism over our universities, to be prepared.
None of us are without blame. At UCKAR, we have not developed and implemented the necessary strategies and tactics to win. Being critical is one thing, creating a new dynamic another. Students have succeeded on these counts. Sustaining and seeing things through to their logical conclusion is a very different, and a much more difficult matter. So here we are wondering if and when the things will be done. To be honest, it doesn’t look as if any sort of effective and popular struggle for Free Education can be carried through at UCKAR this year. Is this necessarily a bad thing?

While it is never straightforward to draw comparisons between struggles at two universities, let alone two countries, the experience of Chile may be helpful in understanding the kind of struggle we are in and how we may proceed. Since 2011, student activists have engaged in protests, lobbying and mobilising support from across society. Despite this, they have not achieved their goal of “free, quality, public education”. Six years after making the call, students there still face a repressive state machinery and their own internal contradictions. Despite this and despite periods of retreat, the students there have continued the fight against neoliberal extortion. Earlier this year, thousands of students again showed their unhappiness with the reforms which have granted free education to only a small number of students (170 000). They want universal free education and nothing less.

We too must find our feet. There are no blueprints and we will have to figure out for ourselves how to take forward our demands. But this will require moving beyond seasonal protests. Strategising, building alliances and support, inside and outside the universities, and sustaining the dynamic requires consistent work. This will require educating ourselves about the political economy of higher education under neoliberalism. It will require grappling with issues of political organisation, alliance-building, mobilisation, agitation and propagation. If reports are true that political party affiliations and personal disagreements have prevented students from meeting one another, then we must figure out ways to move beyond these. In the end, the fees will fall only if we are strong and organised enough to make them fall.

Christopher Morris is an undergraduate at UCKAR. He is also a member of Asinamali.