Water struggles from Johannesburg and beyond

It’s been five years since residents of the poor community of Phiri (Soweto) were first confronted with the practical consequences of the City of Johannesburg’s corporatisation and commodification (read: privatisation) of water delivery.

That was when Phiri was chosen as the first community in the Johannesburg Metro to ‘benefit’ from the implementation of its Operation Gcin’amanzi involving the forcible installation of prepaid water meters under the pretext of fixing ageing infrastructure; the victimisation and cutting-off of supply to those who refused; and, sustained resistance pitting community residents – organised through the Anti-Privatisation Forum (APF) and the newly formed Coalition Against Water Privatisation (CAWP) – against an ‘alliance of Johannesburg Water, the City of Johannesburg, state prosecutors, the SA Police Services and private security firms.

Given such an overwhelmingly uneven contest of power/ resources, the resistance forces were never going to halt Operation Gcin’amanzi in its tracks and gain an outright victory in their struggle for sufficient free water and human dignity. Many Phiri residents paid an enormous personal price for physically resisting and standing up for their rights and dignity.

Besides helping to re-invigorate the tactic of the reappropriation of a public resource turned into a privatised commodity (through destroying and/or bypassing prepaid water meters), the battle of Phiri marked another new watershed in post-1994 water struggles. It not only served to further focus South African and international (critical) attention on the practical character and consequence of the ANC government’s neo-liberal (water) policy onslaught, but also opened the door to testing the stated water service delivery commitments of relevant state policies/legislation and South Africa’s Constitution.

For left/anti-capitalist activists, it is never an easy thing to adopt tactics that do not appear to fit into pre-configured, historically-located understandings and approaches to such struggle. And so, it was in 2005–2006, with a great deal of trepidation and initial half-heartedness, that the APF and CAWP (with the assistance of first the Freedom of Expression Institute and subsequently the Centre for Applied Legal Studies) entered into the institutional-legal terrain of class struggle by assisting five representative Phiri residents to prepare and file a case in the Johannesburg High Court challenging the legality and constitutionality of Operation Gcin’amanzi’s limitation of the free-basic supply of water and the installation of prepaid water meters. The case was seen as a tactic, part of a larger, long-term strategy seeking to use all means available to ensure that water itself is seen and treated as a public resource, that water service providers remain publicly owned, managed and run and that water se vice delivery provides adequate, accessible and quality water to all.

An excerpt from the founding affidavit of one of the applicants, Lindiwe Mazibuko, reveals the dire material and human situation that is the lot of so many Phiri residents and which is also representative of millions of other poor households across the country:

Of the 20 people who are part of our household, one is a pensioner, 3 are small babies and 6 go to school. I suffer from arthritis and high blood pressure. My mother suffers from diabetes, high blood pressure and has a history of cardiac arrest. My sister … suffers from a stroke. She moved in with us with her four children for us to take care of them. My mother is retired and receives a pension grant of R820 per month. The rest of us are unemployed. 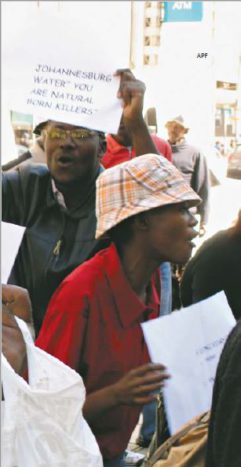 Other applicants tell the story of what it has meant to live without adequate and accessible amounts of the most basic of all needs in life – water – simply because they are poor.

Jennifer Makoatsane describes the burden of washing nappies for her newborn baby, of trying to clean her father’s gangrenous foot and of running out of water during the funeral for her father.

Sophia Malekutu reveals the immense technical difficulties she has had with the prepaid water meter, paying various monies to get it fixed without receiving water. And, Vusimuzi Paki relates the tragic experience of how, when a backyard shack on his property burnt down, he was unable to put out the fire because the water ran out (from the prepaid meter). As a result, two young children – two-year old Katleho Tamane and nine-year old Dimpho Tamane – burnt to death inside the shack. Such have been the ‘benefits’ of Operation Gcin’amanzi and its cynical propaganda of ‘water conservation’ for the benefit of ‘the people’.

The case was filed in July 2006 and eventually heard before Johannesburg High Court Judge M.P. Tsoka, in early December 2007. On 30 April 2008, in  historic and ground-breaking judgement, Judge Tsoka declared that the City of Johannesburg’s forcible installation of pre-paid water meters in Phiri is both unlawful and unconstitutional. The Judge ordered that the limitation of free basic water to the present 6 kilolitres per household per month, be set aside and that the City of Johannesburg and Johannesburg Water must supply Phiri residents with 50 litres per person per day. Furthermore, the court declared that the choice given to residents of either a prepaid meter or a standpipe for water provision in Phiri is also unlawful and directed the City to provide residents of Phiri the option of an ordinary creditmetered water supply. The City of Johannesburg was also ordered to bear all the legal costs of the applicants.

The judgement ranks as one of postapartheid South Africa’s most important legal victories for poor communities and all those who have been struggling against unilateral and profit-driven neo-liberal basic service policies. Judge Tsoka went beyond the legal points, recognising the racial, class, administrative and genderbased discrimination underlying the City of Johannesburg’s water policy. The Judge explicitly rejected the arguments for restricting the water usage of poor communities: ‘… to expect the applicants to restrict their water usage, to compromise their health, by limiting the number of toilet flushes in order to save water is to deny them the rights to health and to lead a dignified lifestyle.’ The Judge labelled the so-called ‘consultation’ with the Phiri community as, ‘more of a publicity stunt than consultation’.

The greatest credit for this extraordinary legal victory must go to the residents of Phiri that resisted the installation of the prepaid meters, and to all the other residents of poor communities, both in Johannesburg and across the country, who have been fighting for accessible, affordable and sufficient water provision/delivery. While the Coalition knows that this judgement will almost certainly be appealed, all the way to the Constitutional Court, this does not detract from the political and social significance of this victory (which includes putting an immediate stop to the City of Johannesburg’s proposed basic service tariff increases and use of the indigent register to determine free allowance allocations).

In the meantime, the struggle against all forms of water privatisation continues. Numerous mass actions (pickets, marches, door-to-door campaigns etc.) have been undertaken over the last year by various community structures allied to the APF and CAWP. In Kliptown, the struggle against the continuation of the bucket system, suspect water quality (attributable to a death by cholera just recently) and lack of infrastructural development has intensified. In the informal shack settlement of Boiketlong (in the Vaal) the community has been on the offensive against an almost complete lack of water and sanitation infrastructure, a struggle that is slowly but surely forcing the municipality to concretely respond. In nearby Sebokeng (Zone 20), residents have begun to mobilise the community and make their demands heard, despite heavy police repression which has already resulted in the death of a community activist last seen in the company of the police. And earlier this year, action by residents of the Kwa-Masiza Hostel, under the banner of CAWP, who had been without water since 2001, succeeded in forcing the water service provider – Metsi A Lekoa – to restore water supplies to the hostel.

Outside of Gauteng, the CAWP and APF remain actively involved in organising, mobilising and assisting communities in both water and other basic service struggles in Rammolutsi (Northern Free State), Khutsong (North West) and in and around Queenstown (Eastern Cape).

Crucially, these struggles continue to plant the seeds of an alternative, seeds that can be found in the organised ability of poor communities to both politically and physically undermine privatised delivery at the point of ‘consumption’. Not only is this an act of self-empowerment at the most basic level of reproductive life, but it provides the foundation upon which the majority of South Africans can pursue the demands for policy and structural changes in the ownership, management and distribution of water and other basic services essential to life.