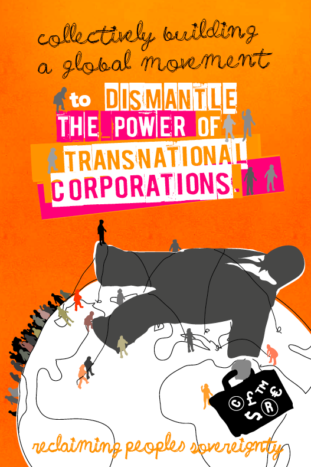 The TNC campaign held a pubic event on 8th February in the Solidarity Center at the Alternative Information and Development Center. This was an opportunity for people to learn more about the campaign and for them to learn how they can get involved with the campaign. 60 people attended the event, creating a room buzzing with energy, with members from mining affected communities, the communities that presented cases at the Permanent People’s Tribunal on TNC’s in Swaziland and different stakeholders from various organizations like Womin, ActionAid South Africa and Legal Resource Center.

Those that attended the event said that they felt there were a great form of engagement between stakeholders and community members and a powerful energy towards the fight against corporate impunity in the region.

The Southern African Campaign to Dismantle Corporate Power, Stop Impunity and Reclaim Peoples’ Sovereign (TNC Campaign), brings together movements, networks, civil society organisation and communities to articulate a joint struggle against human and environmental rights violated on a daily basis by TNC’s, and the architecture of corporate impunity in which they operate and corporate capture of our democratic structures. The Campaign aims to reclaim peoples’ sovereignty from the hands of greedy, corrupt corporations and individuals, through joint struggles and solidarity, to set the stage for a fairer, just and sustainable development of our region.