Sisters of the Wilderness [Screening] 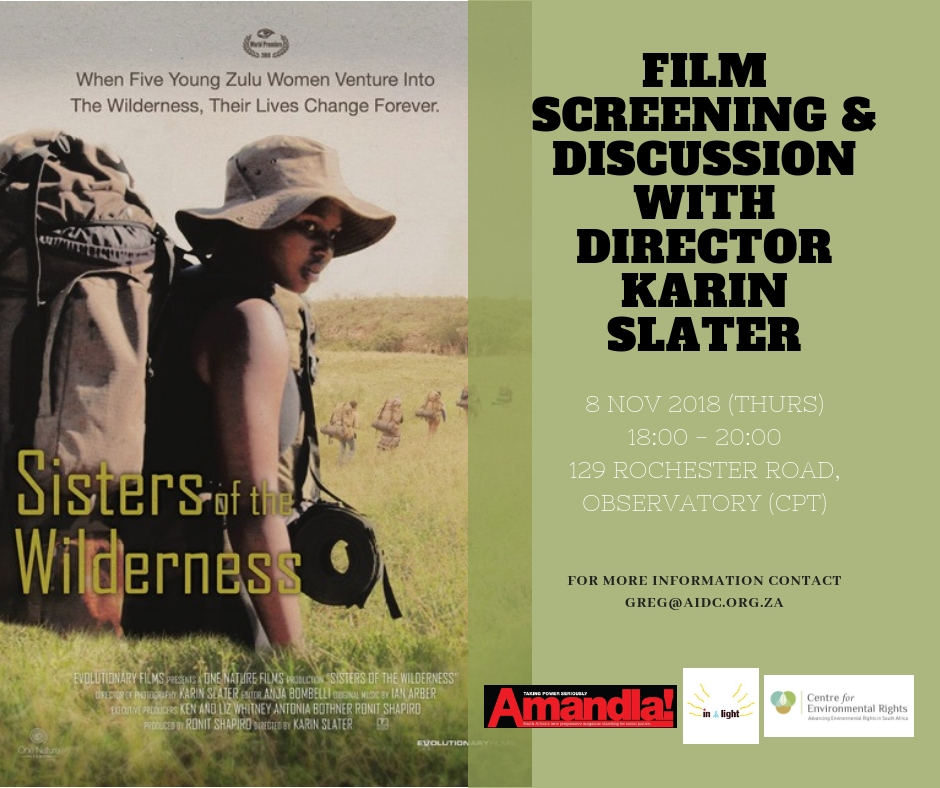 Join us on Thursday, 8 November 2018, from 18h00 at AIDC (129 Rochester Road, Observatory) for a screening of Sisters of the Wilderness and a discussion with Karin Slater, the director and cinematographer.

Part wildlife documentary – the astonishing scenery, the immersive soundtrack – part pilgrimage, the film follows five young Zulu women on a journey of personal healing through the iMfolozi wilderness in South Africa. They learn about animal behaviour, their Zulu ancestry and the importance of conservation. At the same time, access to ancestral lands is called into question, airtime is given to the open cast coal mining expanding along the park’s border and the massive toll of rhino poaching. Crucially, no solutions are offered; instead, the beautifully filmed wilderness is left to speak for itself.

Karin Slater’s deep interest in nature has led to her documenting the lives of interesting people and places across the globe. She has also raised two leopards and lived with a lioness and tigers while making wildlife documentaries. Her films have screened at Sundance, Berlinale, Hot Docs, Museum of Modern Art, New York and she has won numerous awards including the Trailblazer Award for innovative and creative work in the field of documentaries at Mipdoc, Cannes 2008 and at the New York Film and Television Awards in 2016. For this film, Karin returns to the area of her birth and early childhood Hluhluwe- iMfolozi. The film recently won Best South African documentary at Durban International Film Festival.

Durban Jury announced this statement about Sisters of the Wilderness:

With her ability to portray wild animals and to show South Africa’s unique landscapes with a fresh eye and perspectives free from seen-before-angles, the DOP and director of SISTERS OF THE WILDERNESS achieves to create a documentary which is a beautiful homage to one of the oldest Game Reserves of the country. Karin Slater knows how to use this environment in her film as a powerful catalyst to make five young women experience a cathartic yet rejuvenating awareness of their essence during a 5-day trail. The jury gives the award for the best South African documentary of DIFF 2018 to a film which dares to leave the beaten track of traditional documentary filmmaking in exploring the cinematographic wilderness.

You can watch the trailer at: http://www.sistersofthewilderness.com/index.html