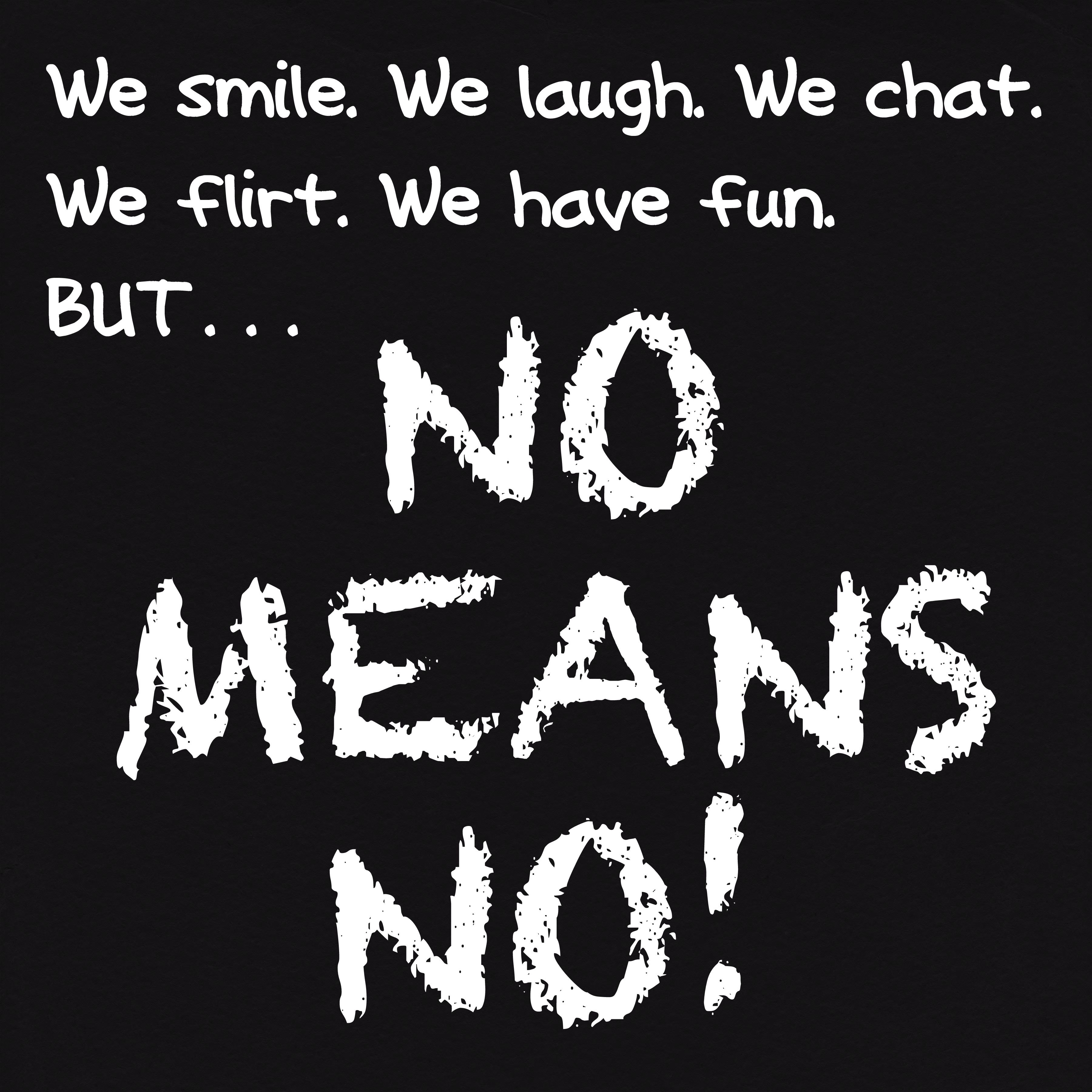 No means ‘no’ is a big improvement over ‘no’ meaning ‘yes’, but until equality exists not even ‘yes’ can reliably mean ‘yes.’ ‘Yes’ can be coerced. It can be the outcome of forced choices, precluded options, constrained alternatives, as well as adaptive preferences conditioned by inequalities.

This article aims to address the notion of consent within the context of violence against women. It does so in terms of both what the law says and the disconnect between the law and lived experiences of survivors. The article speaks of women and girls bearing in mind that the largest percentage of violations occur and are perpetrated against women and girls. But this does not mean that sexual offences cannot be perpetrated in same sex, LGBTI contexts.

The most common argument used to counter an allegation of a sexual offence or sexual harassment has been consent – that the harassment was “wanted”. Notions of when “no” means “no” and when “no” means “yes” come into play and it is often argued that in intimate relationships it is not easy for perpetrators to understand whether a woman is consenting.

• people can say they want tea and then decide they don’t want tea. That does not mean that you can force them to drink the tea;

• people can drink tea with you one day. That does not mean that they want tea the next day or the next week and you should not force them to drink tea next time you see them;

• if someone says they want tea and then passes out, you cannot force them to drink tea;

• people change their mind: they may say I’d love a cup of tea. You boil the kettle and make the tea and then they decide they don’t want tea. This does not give you the right to force them to drink the tea.

The video has been useful for having conversations with youth and university students and for educating the public around notions of consent and victim blaming. But we also need to recognize that sexual offences are not primarily about consent. They are about power. This requires us to engage with a deeper power analysis. Tools that help unpack myths are always welcome – if that can lead to less shaming of survivors who do speak out. Yet we also know that life is more complicated than a “cup of tea” and power relations, coercion and submission are realities that also need to be grappled with.

Despite the limitations of the video – and there are many– there is value in having a conversation about the basics of consent and sending this to a wider audience. It is an important place to start a broader and more complex, but much needed, conversation grounded in an inequality and power analysis.

Sex under conditions of inequality can look consensual, particularly in a context where we fail to grapple with notions of power, race, class, gender, sexual identity and social status. Feminists have correctly pointed out that the unequal status of women in society has resulted in a state of play where what women say in a context of rape and sexual offences is often disbelieved, discounted or reinterpreted for them. Sometimes the fact that a woman has said “no” is still deemed to amount to consent. So we have a situation where a lot of “not-saying-yes” manages to pass for consent, such as the resigned, silent, passive, disassociated submission by a woman who fears for her life or safety.

The law: consent and welcomeness

Acknowledging that the concept of consent itself is highly contested has required us to focus on practical solutions around navigating consent. Rather than articulating what consent to sexual relations is, lawyers have primarily focused on finding a workable legal standard to determine when and how consent is expressed. Contemporary law reform in South Africa, as codified in the 2007 Sexual Offences Act, tries to do this by identifying the circumstances in which consent is tainted and legally invalid.

The Sexual Offences Act defines rape in the following terms: Any person (‘A’) who unlawfully and intentionally commits an act of sexual penetration with a complainant (‘B’), without the consent of B, is guilty of the offence of rape. It goes on to state that sexual acts amount to offences if they are committed without the consent of one of the people involved in the sexual act.

This law is significant because of its gender-neutral definitions and the fact that it has done away with distinguishing between different types of penetrative assault. In legal terms “consent” means voluntary or unforced agreement. This means that a survivor must freely, willingly and deliberately agree to the sexual act, and she must be able to understand what she is consenting to.

The legislation sets out examples of when consent will not be present to try to address some of the harmful stereotypes which silence and victimise survivors, preventing them from entering the criminal justice system. It specifies that consent will *not* be present:

– If a survivor submits to a sexual act because she is forced, intimidated or threatened;

– When a perpetrator abuses his power or authority and the survivor is incapable of showing that she does not consent to the sexual act (for example, in a teacher and pupil relationship);

– When a survivor is deceived into agreeing to the sexual act (for example, the perpetrator has pretended to be a doctor that is required to massage a woman’s genital area as part of a medical procedure).

– Where a survivor is not able to think properly or understand the nature of the sexual act at the time because she is asleep, intoxicated, unconscious, has a mental disability or is a child below the age of 12.

A criminal or a civil matter?

In South African law there is a further sharp divide between nonconsensual sex, which justifies criminalisation, and unwelcome sex, which amounts to sexual harassment and is dealt with in terms of discrimination laws and civil law as opposed to criminal law. This does not stop a survivor from electing to pursue both the criminal and civil law if the elements of the crime fall within the Sexual Offences Act as well as the discrimination laws of the country.

Sexual harassment under South African law amounts to a form of unfair discrimination. There is a Code of Good Practice for the Handling of Sexual Harassment published under the auspices of National Economic Development and Labour Council (Nedlac). It sets out guidelines for handling sexual harassment within the workplace and does not use terminology like “consent”. Instead it refers to “unwelcome sexual conduct” and allows a survivor to hold an employer liable under the Employment Equity Act for failing to protect her from sexual harassment. Where sexual harassment occurs outside of the workplace, in a non-employment relationship, it is then covered by the Promotion of Equality and Prevention of Unfair Discrimination Act which uses similar definitions and guidelines.

The wanted nature of the conduct is often the primary subject of the enquiry in sexual harassment cases. Here the Code has grappled with what a power analysis may mean in terms of indicating whether conduct is welcome:

• How does one assess the “welcomeness” of the act?

• Does one consider the subjective feelings of the actual complainant or do we ask would be the feeling of “the reasonable woman in the office”?

• What of the scenario where the perpetrator insists that the touching was not meant to be sexual and has been misinterpreted, but the woman maintains that the touching made her feel uncomfortable and was perceived by her in a sexual way?

• Where does one draw the line when people do fall in love and consensual relationships do develop?

The Code of Good Practice sets out that:

Sexual harassment is unwelcome conduct of a sexual nature that violates the rights of an employee and constitutes a barrier to equity in the workplace, taking into account all of the following factors:

(1) whether the harassment is on the prohibited grounds of sex and/or gender and/or sexual
orientation;

(2) whether the sexual conduct was unwelcome;

(3) the nature and extent of the sexual conduct; and

(4) the impact of the sexual conduct on the employee.

Because sexual harassment is a form of discrimination, intention is not relevant in the enquiry. The listed factors to consider also highlight power dynamics, alongside the nature of the act and the impact on the survivor. Furthermore, Section 5 of the Amended Code deals with the issue of “welcomeness” and provides that:

(a) There are different ways in which an employee may indicate that sexual conduct is unwelcome, including non-verbal conduct such as walking away or not responding to the perpetrator.

(b) Previous consensual participation in sexual conduct does not necessarily mean that the conduct continues to be welcome.

(c) Where a complainant has difficulty indicating to the perpetrator that the conduct is unwelcome, such complainant may seek the assistance and intervention of another person such as a co-worker, superior, counsellor, human resource official, family member or friend.

Disconnect between experience and the law

While law reform has accomplished significant changes in the past two decades, we still have a long way to go. Reforms to the law of sexual offences and sexual harassment have failed to effect instrumental change in the courts as well as in social norms. There is a disconnect between how sexual offences are experienced and felt by survivors and how sexual abuse is defined by the criminal law.

Law reform was meant to also affect social attitudes about sex and sexual offences, sending a message to the public that sexual offences are a serious violation of rights and a crime. This was intended to shape a new culture that values the individual’s sexual agency as well as respect in sexual relationships.

These hopes remain utopian and have not translated into a reality for women with many women not pursuing legal avenues in cases of sexual offences.

Feminists have correctly been challenging the value of legal tools in producing social change. They have suggested that the law provides a mechanism that is deeply limited in successfully fostering social change, so we need to think about how law reform is coupled with advocacy, mobilisation and work with non-legal movements. In my view, all sexual offences should be defined and viewed in public as an act of abuse of power and as an exploitation of dominance and control which violates the survivor’s right to dignity, equality and bodily integrity under the Constitution. This would require an approach that is geared toward being more responsive to the survivor’s narrative (a survivor-centered approach) and the harm inflicted upon her, while still capturing the wrongdoing of the perpetrator’s conduct.

Nicolette Naylor is the Regional Director of the Ford Foundation, Office for Southern Africa. She previously worked as a public interest feminist lawyer litigating cases of violence against women and sexual harassment.