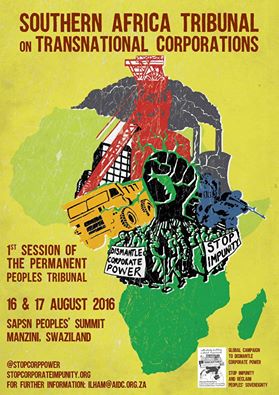 We did it! The first Southern Africa Permanent Peoples Tribunal (PPT) on Transnational Corporations was a major success, and is clearly the beginning of something much bigger than we had expected. The event took place in Manzini, Swaziland, on the 16th and 17th September during the SAPSN Peoples’ Summit which happens annually simultaneously to the SADC Heads of State Summit.

We managed to fit approximately 500 people over two days into a small hall downtown, with the walls covered in banners from many organisations and movements in attendance, creating an atmosphere of excitement and electricity. The 9 communities presenting cases had spent weeks developing them, which resulted in testimonies that showed not only their daily experiences through talks, photos and videos, but also the companies’ legal and financial documentation which some communities and their coordinating organisations had discovered as part of their struggle back home.

The participants showed immense bravery in coming forward with their stories. The community of Maloma in Swaziland presented on their struggle against the Maloma Collieries jointly owned by Chancellor House, the ANC’s business wing, and the Swazi government. It is well known that the Swazi monarchy does not take criticism lightly, and is notorious for sending dissidents straight to jail.

The Tribunal started off with some logistical challenges– Ugandan juror Hellen Grace Akwii-Wangusa was not allowed onto the plane for allegedly having an invalid transit visa for South Africa, and Italian Simona Fraudatorio from the PPT Secretariat was also turned away at the airport in Rome because of an apparently invalid passport. A shuttle breaking down in the middle of nowhere meant that two of the presenting communities only arrived at our accommodation after midnight, and the internet connection at the venue and lodge was basically non-existent (interestingly however, on the day that the Tribunal participants checked out, also the day that members of the SADC Secretariat checked in, the internet connection was brilliant).

It was clear from the powerful impact of the case presentations on both the jurors and audience, that this was the first of what will be many sessions of hearings, many Tribunals, and they need to start as soon as possible. While this Tribunal focused on mining companies, many themes came out of it that will need entire Tribunals on their own – women and resistance, workers’ rights, and land and food sovereignty. There are so many cases to be heard, so many movements struggling and fighting TNC’s with no one seeing and we need to be sure that we give as many of them as possible the platform to speak, and the opportunity to mobilise.

Watch out for a full report back and analyses to be featured in the next issue of the Amandla! magazine – Issue 47.

See some photographs of the Tribunal, and we will soon be uploading short video clips.