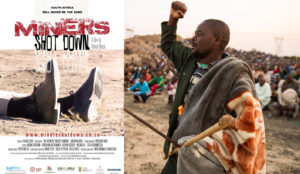 16 August 2012,The Marikana miners‘ strike or Lonmin strike was a wildcat strike at a mine owned by Lonmin in the Marikana. 34 miners were killed in South Africa on this fatal day 2012. A police cover-up was suspected.

4 years since the tragic Marikana Massacre in which 34 people where killed during strike action for a living wage – The Progressive Youth Movement (PYM) will have a screening of the documentary Miners Shot Down, the South African documentary which looks at the Marikana killings (directed by Rehad Desai),  in commemoration with the murdered workers and their families.