Worst drought in 35 years causes crop failures, widespread malnutrition in 10 countries. More than 640,000 drought-related livestock deaths have been reported due to lack of pasture, lack of water and disease outbreaks.

With only a few weeks before land preparation begins for the next main cropping season, some 23 million people in Southern Africa urgently need support to produce enough food to feed themselves and thus avoid being dependent on humanitarian assistance until mid 2018, FAO said today.

A FAO-prepared response plan aims to ensure that seeds, fertilizers, tools, and other inputs and services, including livestock support, are provided to small-holder farmers, agro-pastoralists and pastoralists to cope with the devastating impact of an El Niño-induced drought in the region.

At least $109 million in funding is required to provide this urgently needed support.
Farmers must be able to plant by October and failure to do so will result in another reduced harvest in March 2017, severely affecting food and nutrition security and livelihoods in the region, FAO warned. 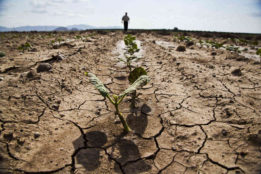 Two consecutive seasons of droughts, including the worst in 35 years that occurred this year, have particularly hit vulnerable families in rural areas, as prices of maize and other staple foods have risen.

The result is that almost 40 million people in the region are expected to face food insecurity by the peak of the coming lean season in early 2017. All countries in Southern Africa are affected.

“The high levels of unemployment and sluggish economies, means that the main way people are able to access food is through what they themselves produce. Assisting them to do this will provide lifesaving support in a region where at least 70 percent of people rely on agriculture for their livelihoods,” said David Phiri, FAO’s Subregional Coordinator for Southern Africa.

“We must make the most of this small window of opportunity and make sure that farmers are ready to plant by October when the rains start,” he added.

The impact of El Niño continues to be felt, with the effects of the drought expected to peak during the lean season between January and March 2017, FAO said.

Widespread crop failure has exacerbated chronic malnutrition in the region. More than 640,000 drought-related livestock deaths have been reported in Botswana, Swaziland, South Africa, Namibia and Zimbabwe alone due to lack of pasture, lack of water and disease outbreaks.

FAO urges investments that equip communities with the ability to produce drought-tolerant seed and fodder, along with climate-smart agriculture technologies like conservation agriculture. The aim is to enable rural families to build resilience and prepare for future shocks.

El Niño’s counter-phenomenon, La Niña, is likely to occur later this year and while it could bring good rains that are positive for agriculture, measures must be taken to mitigate the risk of floods which could destroy standing crops and threaten livestock, including making them more vulnerable to disease. Key mitigation measures include strengthening river banks, building of small dams to reduce flash flooding and stockpiling of short-cycle crop varieties which can be planted after flooding subsides and still yield a decent crop.

The complexity and scale of the crisis facing the region demands strong collaboration among humanitarian agencies, regional authorities and national governments. FAO is working closely with the Southern African Development Community (SADC), as well as with the World Food Programme and other United Nations agencies within the framework of the Regional Interagency Standing Committee (RIASCO).

FAO’s call for more funding comes on the heels of an SADC regional humanitarian appeal, launched in Gaborone on 26 July 2016 by the SADC Chairperson and President of Botswana, Seretse Khama Ian Khama. The SADC appeal put the overall price tag of helping all sectors of the region’s economy recover from the 2016 El Niño at $2.7 billion, of which $2.4 billion is yet to be funded.