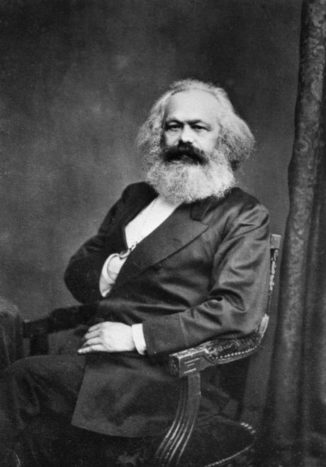 Two hundred years after Karl Marx’s birth, the influence of his critique of capital is now as great as ever, in the context of what has been called the “Marx revival.” For those who believed that Marxism had simply died out with the fall of the Berlin Wall, a casualty of what Francis Fukuyama pronounced “the end of history,” this is no doubt a startling development.

In 1942, during what he dubbed the “Marxian revival” of his own day, the great conservative economist Joseph Schumpeter wrote that

Most of the creations of the intellect or fancy pass away for good after a time that varies between an after-dinner hour and a generation. Some, however, do not. They suffer eclipses but they come back again, and they come back not as unrecognizable elements of a cultural inheritance, but in their individual garb and with their personal scars which people may see and touch. These we may well call the great ones—it is no disadvantage of this definition that it links greatness to vitality. Taken in this sense, this is undoubtedly the word to apply to the message of Marx.

I will argue that the “greatness” and “vitality” of Marxian social science that Schumpeter notes derives primarily from its inner logic as a form of open-ended scientific inquiry. Against attempts in the dominant ideology to characterize Marx as a rigid, dogmatic, deterministic, and closed thinker, it is precisely the open-endedness of his “ruthless criticism of all that exists”—an open-endedness inherently denied to liberal theory itself—that accounts for historical materialism’s staying power. This openness can be seen in the Marxism’s ability constantly to reinvent itself by expanding its empirical as well as theoretical content, so as to embrace ever larger aspects of historical reality in an increasingly interconnected world.

This open-endedness of historical materialism has long been understood by the most critical thinkers—Marxists and non-Marxists alike—and has been the basis for extensions of its dialectical vision made by such revolutionary thinkers as V. I. Lenin, Rosa Luxemburg, Antonio Gramsci, and Che Guevara. However, in the last few decades, the work of the Marx-Engels-Gesamtausgabe (MEGA) project, dedicated to publishing Marx and Frederick Engels’s complete manuscripts, has further impressed on scholars the lack of any final closure in Marx’s thought. The MEGA initiative has highlighted as never before the inherent incompleteness of Marx’s critique of political economy—a result not only of the inability of any single person to bring such a vast project to completion, but also of the project’s materialist-scientific character, which required unending historical and empirical research that could not be foreshortened by the imposition of suprahistorical abstractions.

Marx’s work displayed three levels of incompleteness, that of: (1) Capital itself, since only the first volume was published in his lifetime, and the second and third volumes were edited by Engels from his notebooks (there were numerous drafts of his critique of political economy, encompassing fifteen volumes in MEGA); (2) his overall critique (Capital was intended as only the first of six books, including volumes on landed property, wage labor, the state, foreign trade, and the world market and crises); and (3) his entire historical project beyond the critique of political economy, symbolized by his massive chronology of world history, extending over 1,500 pages. In addition, Marx left behind more than two hundred major notebooks of excerpts from other authors, which reveal the extent of his researches, encompassing social science, history, anthropology, natural sciences, and mathematics. Many of these were completed after the publication of Capital and reveal his efforts to extend his analysis in various areas, particularly through the incorporation of natural science.

What Marx left behind, therefore, was a vast, incomplete corpus reflecting a wide spectrum of scientific studies—made even more voluminous when Engels’s work is added. Strikingly for researchers confronted with this mass of material, Marx regarded his theoretical conceptions as “guiding principles,” as indicated in his 1859 preface to a Contribution to a Critique of Political Economy, and not as a priori postulates simply awaiting confirmation. His studies were such as to indicate the need constantly to transform his provisional hypotheses in light of changing evidence. That is, Marx’s investigations were scientifically open-ended, even as he proceeded from rigorous bases.

The unfinished nature of Capital led Michael Lebowitz to argue in his Beyond Capital in the 1990s that the missing volume on wage labor created a one-sidedness in Marx’s analysis, requiring a radical reconstruction of his views from the standpoint of the political economy of wage labor. More recently, others, such as German economist and MEGA scholar Michael Heinrich, have used the incompleteness and open-ended nature of Marx’s inquiries to question the theoretical status of the tendential law of the falling rate of profit. Italian economist Riccardo Bellofiore has interpreted Marx’s conception of the tendency of the rate of profit to fall more broadly as a “meta-theory of crises” to which all Marxian crisis theories are related, and not as a narrow, unilinear empirical prediction. The new understanding in recent years of Marx’s monetary theory of production and his value-form analysis has allowed scholars to transcend the so-called “transformation problem” (connected to the relation of value and price in the Marxian scheme), making it clear that this so-called problem derived from a failure to understand Marx’s revolutionary break from classical Ricardian economics.13 Still other thinkers have used Marx’s unpublished or recently published notebooks to address his later explorations of such issues as ecology, gender, and imperialism.

All of this has contributed to the current rapid development of Marxian theory. The influence exerted by Marx’s excerpt notebooks being published in the MEGA project’s latest phase resembles the central role that the publication of the Marx–Engels correspondence played for earlier generations. As Lenin explained, in these letters “the extremely rich theoretical content of Marxism is graphically revealed,” encompassing “the most diverse aspects of their doctrine,” including what was “newest (in relation to earlier views), most important and most difficult.” It is precisely this emphasis on the diverse, newest, and most difficult aspects of Marx’s (and Engels’s) analysis—evident in the unfinished character of the research on which it was based—that has today become a source of insight and inspiration, leading to new, creative approaches to historical materialism. This incompleteness of Marx’s intellectual corpus is thus now recognized as a strength, making the scientific character of historical materialism clear as never before.

Yet if the incompleteness of Marx’s critique, and hence the necessity of reconstructing and extending it, are by now widely recognized, reviving Marxian theory on scientific grounds, this has only served to underscore the theoretical open-endedness of Marx’s overall approach to dialectics, materialism, and history. It was for this reason that his intellectual inquiries were so laborious and extended—as Marx famously put it, “there is no royal road to science.” In sharp contrast to Georg Wilhelm Friedrich Hegel, Marx maintained that the dialectical form of presentation was limited precisely by the fact that complete closure was impossible—that dialectical relations should be conceived as mediations within a totality that was itself open-ended, never reducible to a preconceived circle or suprahistorical logic. Dialectical analysis alone thus could not provide any meaningful answers independent of empirical-historical research. Likewise, as Marx was among the first to discover, materialism demanded an open-systems theory perspective, preventing any simple closure or all-encompassing universal laws. For Marx, history itself was inherently open-ended: “All history is nothing but a continuous transformation of human nature.”

Only by understanding the open-ended nature of Marx’s critique can we appreciate the full range of his investigations—often tentative and revealed only on the margins of his analysis. These loose ends in historical-materialist analysis are giving rise to the revolutions now taking place in various domains of Marxian theory, including value-form analysis, social-reproduction theory, the critique of racial capitalism, and Marxian ecology. Together with the ongoing revolutionizing of theory and practice regarding the state and revolution in the global South—inspired in part by the merging of historical materialism with various vernacular revolutionary traditions—these trends point to the emergence of a new and even more radical Marxism for the twenty-first century.