A closer look at Ramaphosa’s promises 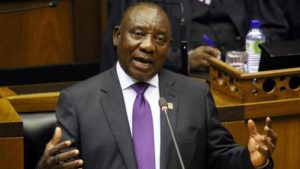 The maiden SONA speech of President Cyril Ramaphosa on 16th of February has been met with a number of global and local responses – from opposition parties to ex-presidents to the market. Within the duration of the speech that was less than one-and-a-half-hours long, the Rand strengthened by four cents in relation to the dollar. This might be welcomed by many but must be seen as what it is: a direct response to Ramaphosa’s neoliberal pro-investment economic policies that formed such an integral part of his speech. Whilst these policies were welcomed by the mining sector, mainstream economists and big businesses, they were criticized by labour unions, social movements and some major opposition parties.

The revolutionary announcement around expropriation – and many questions

The point receiving most applause out of all his statements in parliament was the President’s support for land expropriation without compensation. However, one must keep in mind that actions speak louder than words and we are yet to see how this will manifest. Whilst land expropriation without compensation was welcomed by the EFF, they also warned of false promises. In 2013, the ANC promised to transfer 30% of the 82 million hectares of agricultural land to Black people by 2017. This was not achieved, and though the process continues slowly, fears that these new promises will go unmet like the past promises of the ANC are shared by many.

One’s doubts grow when looking at Ramaphosa’s contradictory statements: Wanting to increase the agricultural sector and attract investment whilst at the same time pushing expropriation is, according to many analysts, impossible. If it comes to a situation where he has to choose between expropriation without compensation or favouring the market, most have no doubt that he will follow the neoliberal guide of making South Africa an attractive investment hub, since this falls more in line with his generally neoliberal economic policies across all spheres.

Another question one can ask is how Ramaphosa plans to go through with expropriation when the funding set aside for land claims themselves has actually decreased. The land claims include buying or compensating for land as well as providing settlement, infrastructure and post-settlement support. Since the funding for this program, which is an essential component of land expropriation without compensation, has decreased, it is difficult to understand how Ramaphosa plans to go through with his revolutionary announcement.

Therefore, it seems apparent that Ramaphosa might not be the one to actually go through with these promises. This is why we welcome the motion that was passed by the EFF in Parliament on the 27th of February, which makes provision for an Amendment to Section 25 to allow for land expropriation without compensation, thus enabling other actors aside from Ramaphosa to carry out this decolonial mandate.

Land and its history of dispossession

To quote one of the most esteemed decolonial thinkers Frantz Fanon: “For a colonized people the most essential value, because the most concrete, is first and foremost the land: the land which will bring them bread and, above all, dignity.” Land is one of the most pressing issues of the current South African climate. If a party does not include the redistribution of land in their political agenda, they are not serious about bringing fundamental structural changes about in this country. Those who own land own the means of production and hence control the economy. Since the dawn of “democracy” in South Africa, white people’s possessions have largely remained untouched when it comes to issues of land and economic ownership. The most recent land audit published in January of 2018 reveals the immense inequality amongst distribution of farm and agricultural land: White people (making up 9% of the population) own 72%; Coloured people (9% of the population) own 15%; Indians (2.5%) own 5%; and Black people (76%) own 4%.

The DA and the Freedom Front Plus also criticized the President’s announcement, but for different reasons. In response to the DA & FF Plus’ criticism, Julius Malema warned the DA that their control of the metro municipalities, which the EFF helped them take over after the 2016 local government elections, depended on their attitude towards land expropriation without compensation. In Malema’s words: “Anyone opposed to the expropriation of land without compensation is our enemy and will be dealt with accordingly.” 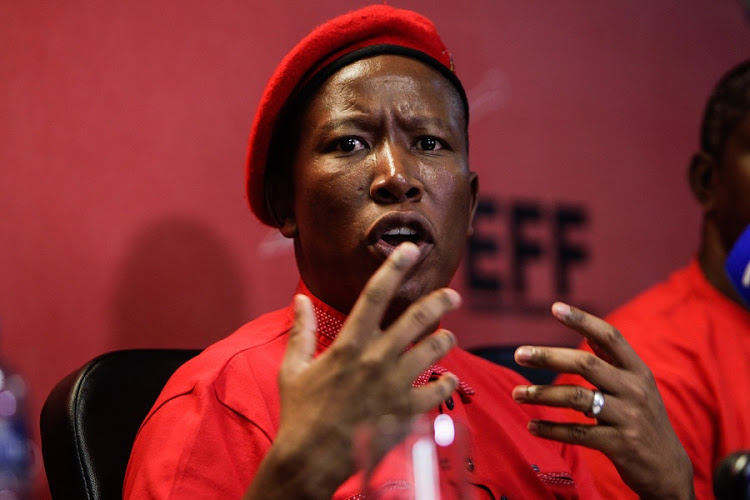 Julius Malema, leader of the motion on expropriation without compensation

COPE’s Mosiuoa Lekota asked who the land will be taken from and who will it be given to. Whilst his question on whether land will be taken from the descendants of Malaysian slaves and Indians may be valid, it must be seen in the larger context in which Lekota was asking this question. And this context is one of historical falsification and revisionism. He was interviewed by SAFM after the debate and made very appalling claims, suggesting that in the Cape Colony, Black people never had their land forcefully taken from them, that they were “relatively free” and could vote and own properties. Therefore, his questions should be seen as a distraction from the historical, social and economic responsibility that comes with the importance of expropriation without compensation.

A return to a democracy of neoliberalism?

Another major point of criticism by opposition parties was about the President not taking decisive action against some of the ministers who were directly or indirectly involved with the Gupta crime syndicate, including Minister of Finance Malusi Gigaba. The cabinet reshuffle on February 26th saw Ramaphosa deciding against sacking him and instead moving him to his previous portfolio of Home Affairs. Falling in line with the President’s neoliberal stance, he also decided to reappoint some key figures that could help him pursue these capitalist policies – like Pravin Gordhan as Minister of Public Enterprises, who is known for his Eskom privatization proposal, or Nhlanhla Nene, who has spent the last few years in the private sector as a director of Allan Gray and a resident adviser at Thebe Investment Corporation. Ramaphosa’s unwillingness to sack individuals closely tied to the Zupta scandal – and his simultaneous willingness to hire ministers known for their neoliberal ideals – clearly exposes the lack of structural change that his election stands for.

In terms of economics, Ramaphosa did mention some meaningful policy ideas, including restoring state-owned enterprises, supporting Black industrialists as well as small business and people with disabilities, introducing the first national minimum wage that South Africa has ever seen and fighting fraud and collusion in the private sector. However, based on the amount of time he spent talking about economic growth, attracting foreign investment – especially through special economic zones -, revitalizing the mining sector and pushing free trade agreements, it is clear that his economic policies seem to fit right in with the capitalist policies of his predecessors. This notion is further supported when one takes a look at Ramaphosa’s own business interests: He not only served as a major shareholder and director of Lonmin during the time of the Marikana Massacre, but also built his fortune through the company Shanduka, which was recently named in the Paradise Papers for its offshore tax havens. Even though he brought up the fact that 17 million people receive social grants, benefitting almost a third of the population, the EFF’s Floyd Shivambu appropriately said how this is not a fact for celebration. The fact that this amount of people are in need of social grants should be a matter of concern, as it means that there is a significant part of the population that is left out of economic activities. Why not go to the root of the problem rather than addressing the symptom?

Overall, the SONA represented a return to democracy in the way it was operating during Mandela’s and Mbeki’s terms: less corruption but the same neoliberalism that has plagued South Africa since 1994. Whilst it may have helped a small Black minority to acquire wealth, that very neoliberalism left the majority of the population in the same squalor as before. When looking at some of Ramaphosa’s more radical promises – like of land expropriation without compensation, socialist economic policies and rooting out corruption -, one has to remain critical and ask: How can a big-business, liberal ANC President, who is directly or indirectly implicated into the worst atrocity to occur since the beginning of South Africa’s “democracy”, bring about those radical changes he is suggesting?