The Guardian view on snow and ice: it’s too cold here but too warm in the Arctic

The Guardian view on snow and ice: it’s too cold here but too warm in the Arctic

Editorial by The Guardian 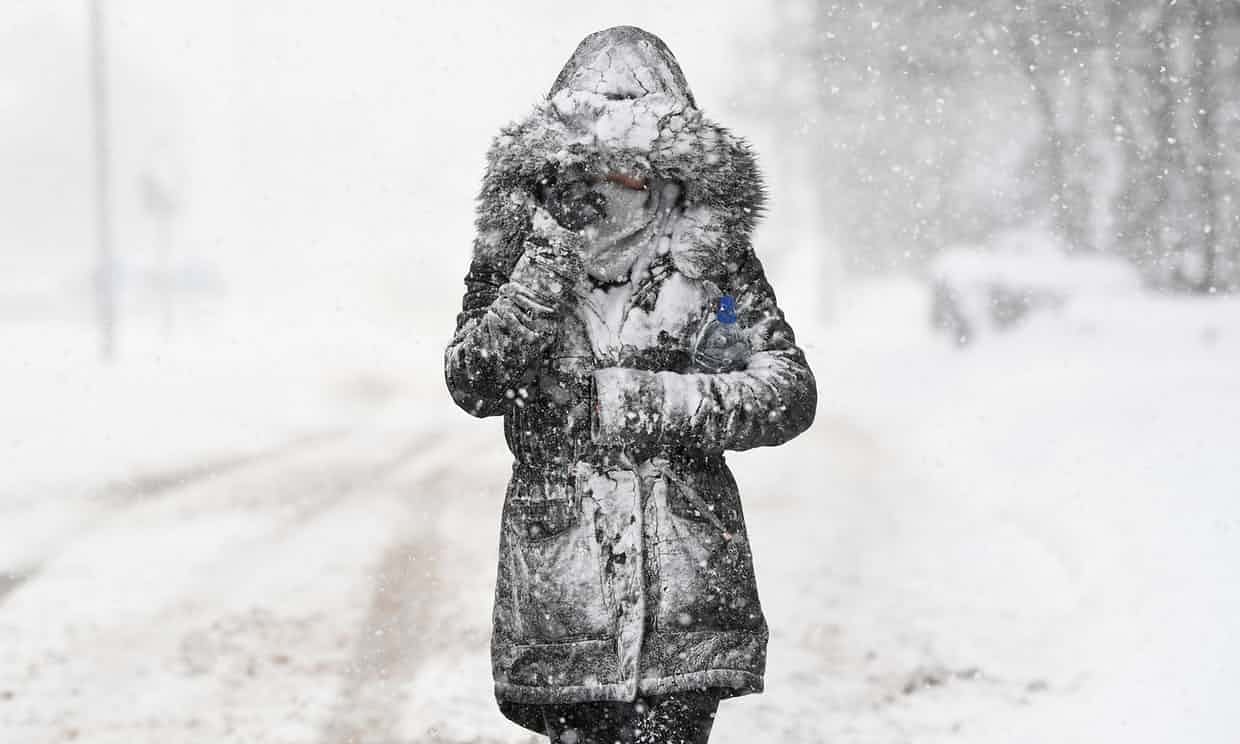 A woman makes her way through the snow on Thursday in Balloch, Scotland. ‘It is human nature to worry more about 2cm of snow falling in our backyard today than all the oceans of the world rising by 10 times as much over the next century.’ Photograph: Jeff J Mitchell/Getty

When does weather turn into climate? The cold snap in Britain and Europe may be a sign of really dangerous change elsewhere

The weather is extremely worrying. It has never been so warm for so long at this time of year before and it is just possible that the effects will be catastrophic. We are talking, of course, about the Arctic, where over vast areas of frozen sea the temperatures are higher than they are in Britain today. A blast of winter in Britain and across much of northern Europe is unpleasant but perfectly survivable and affects few people outside the region, but a period of unseasonal warming in the Arctic could be the harbinger of something that changes the whole world for the worse. Both could be connected so that the cold winds that belong in the Arctic have broken out southwards to chill us while warm winds melt the ice cap. We don’t know, but that’s no reason for complacency.

Precisely because climate change on the scale now under way is outside all previous experience of which we have records, it’s impossible to know which unprecedented fluctuations are those that mark the transition to a new and more dangerous state. That determination can only be made long afterwards, when it is too late to change anything. It does not mean there is nothing to worry about; only that we can’t be certain what ought to worry us. This one probably should. The weather in the Arctic has always shifted dramatically over short periods, but the drama has never been this intense since records began. At one spot in Greenland the temperature rose 36C above the annual average, and for two days in February the north pole has been warmer than Zurich in Switzerland.

The system of global climate is extremely complicated and full of feedback loops that are not properly understood, but the worry is that the freak warming of the Arctic marks the emergence of a new feedback loop where increasing temperature leads to still more destabilising rises. The polar vortex, a great girdle of winds that keeps the cold air of the Arctic separate from the warmer air of temperate regions, seems to be weakening. Warm air goes north; cold air comes south. In the long run, everything grows warmer.

At the moment, this seems to be mainly affecting the Arctic sea ice, which is shrinking at an astonishing rate but does not of itself contribute to rising sea levels. The fear must be that the great ice sheets of Greenland and Antarctica, which rest on buried land, will melt and drown many of the world’s most populated coastlines. Sea levels will rise for the rest of this century even if the ambitious targets of the Paris accords are met. These commit the world to cutting the net emissions of greenhouse gases to zero by 2050. Even if that happens, the latest research suggests that sea levels will continue to rise for another two centuries, and may do so by a completely catastrophic amount. The change in behaviour must come quickly: every five years’ delay in action may add another 20cm to the projected sea level rise.

All these changes may seem small and distant. It is human nature to worry more about 2cm of snow falling in our back yard today than all the oceans of the world rising by 10 times as much over the next century. But the one is a parochial inconvenience and the other a global catastrophe. The snow this week may be a warning of something very much more destructive and we should act as if it were, even if we can’t be certain that it is. The consequences of misplaced optimism would be far worse than those of a pessimism that was not borne out by events. Our descendants won’t thank us if they never see any snow in a shrunken Britain where the coastline runs past Cambridge.

This Editorial has been published by The Guardian.