Million Climate Jobs Monthly Meetings have been taking place at AIDC´s premises since 2012. Approximately 15 participants attended the meeting on 4th August 2017. Unfortunately our main speaker, Frank Spencer, fell ill, therefore we screened a documentary instead.
“Breakthrough in renewable energy” (available here ) deals with renewable energy now being cheaper than fossil fuels. It centres on a large solar power plant in Dubai. Its costs of production for electricity are only one third the production costs of a gas power plant. Whereas prices for resources, such as fossil fuels, go up, when the usage increases, the prices for technologies, such as wind turbines and solar panels, go down, because the producers profit from experience gained in mass production. Now the global price for fossil energy and renewable energy might be almost the same, but in the long run renewables will be much cheaper.
Even though South Africa is not mentioned at all, the presented facts are relevant for us. ESKOM, as well as several trade unions oppose renewable energy, they maintain that it is too expensive and kills jobs. The film shows the opposite.
Discussion:
• South Africa is blessed with enough sun and wind to produce baseload renewable energy.
• The country has to utilize the silicon that is mined in Limpopo for local production of solar panels instead of exporting the raw material. There is enough workforce available to be employed in the factories.
• Currently renewable energy companies are leaving South Africa, claiming that the Government´s commitment to nuclear power does not leave space open for them.
• Ways must be find to get the trade unions onboard. So far, they feel that renewables threaten their jobs, e.g. in mining and transport. In order to make them move away from that point of view, it is necessary to provide information on how many and which kind of jobs are going to be created in the transition to renewables. Furthermore there might be benefit in inviting unionists from foreign countries, which have already found a successful way to cope with the transition to renewable energy. Trade unions speaking in favour of renewables would be a powerful voice for labour
• The marginalised working class has to be included
• Rather than climate change, the film gives price competitiveness as the reason to move to renewable energies.
Lucia Winkler: Film on Climate Change 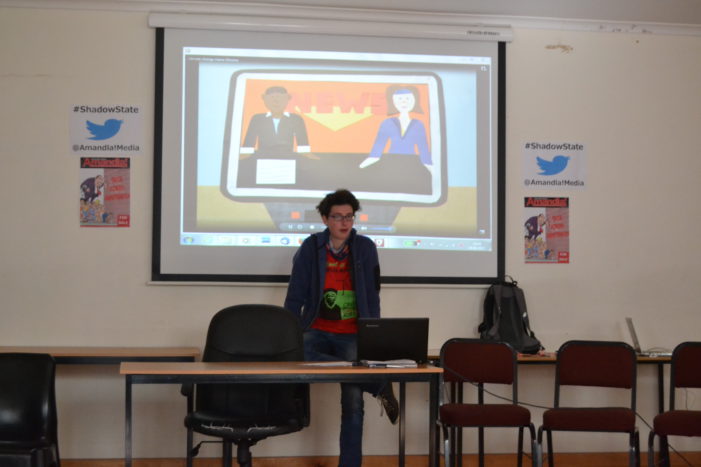 Lucia presented the draft version of her new film and asked for comments. The film was very well received with a few suggested tweaks being made being made to the voice-over text. The finalized version will be presented at the next meeting, but not by her herself, because she is returning to Germany at end of this month. Fossil Free SA campaign updates are a standing agenda item at our meetings, but this time, David expanded on the background to the campaign:

Often it is the power of big fossil fuel companies that hinders governments from acting against climate change. Laws curbing carbon dioxide emissions endanger their business – that´s why they lobby against.

All large fossil fuel companies depend on people buying their shares. This gives us some power, because we can choose not to invest money in them. This is not always easy, because most of the time it is not obvious, which public institutions, banks or even municipalities are involved in fossil fuel investment. Fossil Free South Africa wants to disclose these backgrounds and convince people to divest from fossil fuel. David pointed out some successes of the campaign:
Fossil Free SA has been campaigning at UCT for 3 to 4 years. The university has much money invested in fossil fuel companies, but now started to divest.
Just last year Fossil Free SA started calling on the City of Cape Town to divest. Last month there was a press release stating that the City has decided to divest from fossil fuel companies. Now the City has to be held accountable. Cape Town would be the first city in Africa to take this step and could set a good example for others.
When one as an individual gives savings to a bank, e.g. pays them into a pension fund, one is usually not aware, that the money does not lay idle in the account, but that the bank works with it. Often the money is invested in fossil fuel companies. Even though it is one´s right as a customer to ask the bank not to do so, it is likely the bank will ignore an individual´s wish for “special treatment”. Fossil Free SA wants to start a petition. The signatures will show the banks that it is not only individual customers who want divestment from fossil fuel.
Community Reports 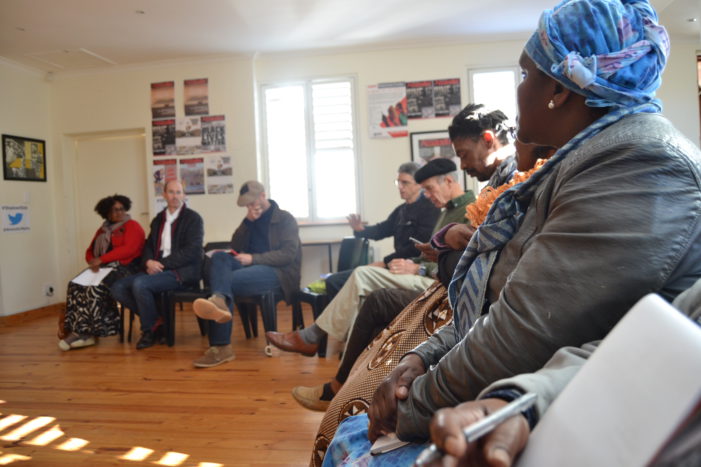 • PYM workshop on biogas digesters
PYM has identified comrades, who are keen to participate. The next step is to fix a date with Muna Lakhani. The organisation is very occupied by the Izwelethu land occupation, that´s why there was little progress made since the last meeting.
• “Plant a tree a month”-Initiative: plans on housing
Comrade Sizwe has plans to build proper houses from waste and bottles. He is in contact with people who have a plot, but only a shack on it and no money for a brick-and-mortar house. AIDC promised to bring him in touch with an engineer/architect, who has extensive experience in this field. Sizwe agreed to take photos of the plot and surrounding land to show to the engineer/architect
• Community Garden in Makhaza
The comrades from Makhaza have already fenced off a piece of land close to Sinako High School. Gender CC is going to run a garden workshop on permaculture there on the 17th of August. AIDC suggested they be put in touch with the people from Woodstock Peace Garden, who could share their experience on hydroponic growbeds.
• Solar Water Heaters
Our comrade from Site B reports, that in 2011 there were people coming with application forms for solar geysers. Nothing has happened since then. Even though it is too long ago to really achieve something with a follow-up, the meeting agreed, that there might be benefit in bringing one of the application forms, to at least find out who was behind the initiative.
• DCYM – Site C
Comrade Lethukuthula has plans to set up a library for the children in his neighbourhood, because the next public library is far away. He already has a space, but there is need for books and support. Thembeka and Sizwe were identified as possible people to help.
Updates by the CER
On behalf of the Centre for Environmental Rights Jeff reported on two issues.
Firstly there is a new large coal fired power plant built in Limpopo, called Thabametsi. It´s going to cause a huge amount of emissions and harmsthe environment and the surrounding communities. CER started a court case to challenge the operating licence for the plant. They will keep us updated.
Secondly the CER informed us that the City of Cape Town has taken legal action against the Minister of Energy. The City wants to start a renewable energy initiative but needs the Department of Energy to agree. Of course they haven´t, because more renewable energy would shrink the space for nuclear. Even though the City´s step towards more renewable energy is good news, we have to keep in mind that it is a privatized initiative, that does not include socially owned renewable energy.
Update: Water Policy
Thembeka reported back from the last water caucus meeting.
The water review of 2013 includes unfair regulations, e.g. that the value of your house can exclude you from free basic water. The review was done without proper public consultation, so that no one was aware of it. Legally a pretended public consultation process is contestable, so that there is the possibility to challenge the City on it.
The EMG has still to formulate questions for a MP to ask about the review of the free basic water policy.
Update: Just transition
Unfortunately Tasneem Essop could not attend the meeting to report on the issue in detail, but action has been taken to bring together trade unions and civil society to discuss the issue. The matter was deferred to next meeting for a detailed report on the various workshops held in recent weeks on a Just Transition.
Next Meeting
The next meeting is going to take place on the 7th September with Mark Swilling talking on “The political obstacles of renewable energy” as main agenda item
7th August 2017 Lucia Winkler