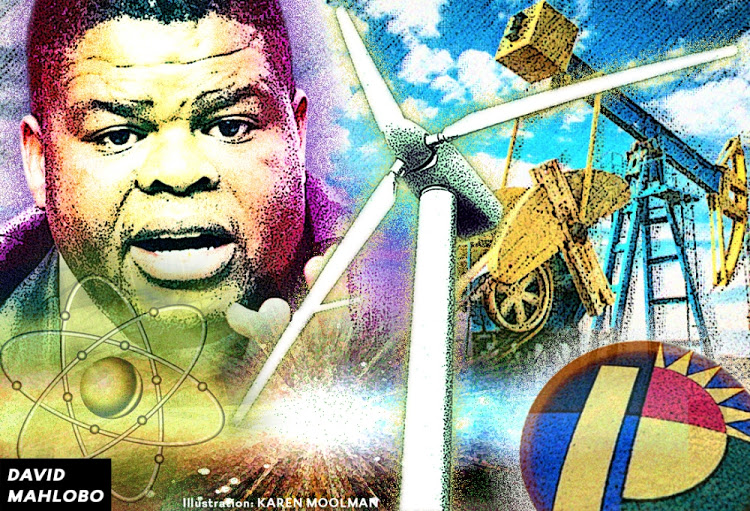 We don’t often get a detailed PowerPoint presentation from an energy minister, particularly one that has not been polished into generalities or cryptic messaging but actually reflects the thinking going on within the ministry. As Energy Minister David Mahlobo has issued invitations to an Energy Indaba on Thursday and Friday, it is worth looking in detail at his energy strategic issues presentation to Parliament’s portfolio committee on energy, which took place on November 21-22.

While there were many questionable statements, it was the overall focus and prioritisation that probably indicated the intentions of the “indaba”. From reorganising the Central Energy Fund (CEF) as a vehicle for mega-project procurement to invoking “endowment” as the basis for resuscitating the minerals-energy complex, there is much that should be discussed at an inclusive gathering.

The section on “global and local energy dynamics” is quite telling: Russia is not directly mentioned, but there is (under the heading Other Key Environmental Considerations) a call for nuclear and liquefied natural gas (LNG): “Affordable LNG imports create an opportunity for the country to develop a gas market using imported gas. This gas market will act as a primer for domestic shale gas.” A terminal for landing and regasification of LNG is a big commitment to make on the unproven assumption of substantial gas being present in our deep shale formations.

Parliamentary notes do not include an answer to the question whether SA has become contractually bound by the “co-operation agreement” that was recently signed with RosGeo — that is, to buy Russian gas. However, there has been discussion of pricing methodologies, although media coverage of the agreement, reportedly securing about R5bn in finance, has emphasised the component regarding exploration for domestic gas fields.

A new oil refinery for PetroSA is clearly high on the wish list, and urgent: “The NDP [National Development Plan] calls for a decision on the new refinery in SA in 2017. This is a good opportunity for CEF to play its strategic role in taking a lead in the industry towards CF2 migration” (Clean Fuels 2 is the specification for most new vehicles, which refineries in SA currently cannot meet).

This appears alongside the observation: “Imports of liquid fuels finished products continue to increase, negatively impacting the country’s balance of payments, compromising the opportunity to create jobs in refining activities.”

No concern is expressed regarding the balance of payments effect of importing crude oil for a new refinery, or starting to import LNG, yet importation of liquid fuel products, which is growing from the recent 10% of total sales, is deemed to justify procurement of a 400,000 barrel-per-day new oil refinery.

None of the energy planning documents from the government has even considered the potential for reducing total energy imports by displacing the use of liquid fuels with electricity, including from our huge renewable energy resources.

Despite electricity dominating our energy discourse — with any distinction routinely ignored — it actually makes up less than a third of national energy at the point of use, or total consumption. SA could double this contribution to the end-use mix, as proposed in most scenarios for a seriously low-carbon energy system, but it will take a few decades, so should start now.

Expanding the role of the electricity system would also be a better infrastructure investment than subsidising exploration for oil and gas that might be present within our territories, but that must not be burned if we are serious about avoiding catastrophic climate change.

For SA, replacing the one-fifth of primary energy supply that is imported with energy carriers produced from domestic resources makes economic sense even when we ignore climate change. Given the far greater efficiency of electric motors, the large and direct long-term savings for consumers would be compounded by avoided “externalised costs”, including impaired childhood development due to air pollution.

The fact that this opportunity does not feature in national planning processes, either for electricity or energy as a whole, is the clearest indication of continuing “capture” of the energy system by the forces of capital and transnational minerals corporations, from the origins of the energy system in the colonial era and into the present, despite the government ostensibly being responsible for strategic decision-making in the public interest. The recent “capture” of Eskom has been no more than a changing of the guard, with the redirection of monetary flows being rather challenging and thus being supplemented by additional forms of “rent-seeking”.

From an energy perspective, the status quo is entrenched and policy deliberation yields to arguments over what megaprojects to secure, from oil refineries, through LNG import terminals and pipelines, to big clusters of nuclear reactors — not to mention more coal mines and railways. The big picture of our energy system, undergoing transformation with or without responsible guidance by the government, is lost to narratives serving the energy incumbency (now marginally more inclusive), while infrastructure for the delivery of energy services to citizens continues to deteriorate.

A further indictment of our protracted “planning” is neglect of new opportunities to accelerate universal access to electricity at costs far lower than the Eskom electrification approach. This despite research undertaken by the government spelling out the macroeconomic rationale for shifting Treasury allocations for electricity access to a roll-out of solar photovoltaic (PV) systems, under an independent agency for decentralised energy services (to be democratically managed in conjunction with developing capacity in local government).

The economic case for such sustainable development was made in a paper quietly released by the Department of Environmental Affairs in 2015. Since then market conditions have continued to shift in favour of decentralised renewable energy deployment as the most affordable, efficient and rapid way to bring power to people not served by the grid.

This is further evidence that the electricity game has been irrevocably changed by the 80% reduction in solar PV production costs, even as a succession of energy ministers have pronounced possible domestic gas as a “game-changer” and called for “gas industrialisation”.

Opportunities to meet energy service needs that do not involve big infrastructure projects are ignored in the preoccupation with mineral energy resources, regardless of the strong driver they could provide to support local manufacturing.

According to notes of the minister’s responses to parliamentarians on the question of using nuclear, he said “in terms of resource economics, it was not a matter of choice but rather a matter of endowments”.

His presentation does note that “the department had made a choice that villages and certain industries could use renewable energy”.

The minister’s presentation, which barely acknowledges the existence of Eskom and none of its challenges, indicates that the oil and gas sector is where he sees opportunity, though there is no mention of the Gas Utilisation Master Plan or the 20-year Investment Strategy for Liquid Fuels that have for years been promised as elements of the Integrated Energy Plan, initiated in 2012.

Expanding and strengthening the mandate of the CEF is clearly central to his intention “to strengthen our role in the energy sector”.

This article has been published by the Buisness Day. Worthington is a researcher with the Alternative Information and Development Centre.