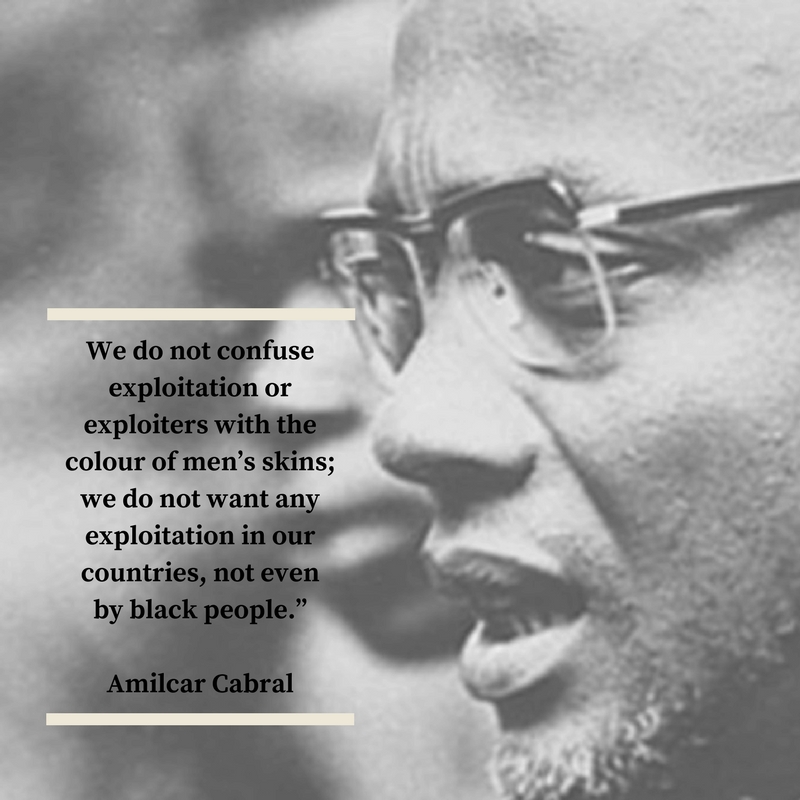 Professor Chris Malikane at Wits is one of the advisors to the new and nervous Finance Minister, Mr Gigaba. For this reason, Malikane’s recently published version of “Radical Economic Transformation” caused an outcry from DA, business and representatives of finance capital. His first, longer paper “Concerning the Current Situation” was followed by “Call for anti-imperialist workers to unite” in Sunday Independent.

In the latter article, the ANC government is asked to come up with “a new National Economic Plan”. The plan should outline how demands for “expropriation of white monopoly capitalist establishments” (mines, banks, insurance companies, monopoly industries …) can “immediately be realised”. In the same vein, Malikane calls for “expropriation of all land without compensation”.

Much more important than what Malikane thinks should “immediately be realised” by ANC in a distant future, is the political project he thinks should be immediately realised now. And that is support for the rise of the “tender-based black capitalist class”, which “has no coherent historical international backing”.

When we put his ”broad anti-white monopoly capitalist united front” under the magnifying glass, its essence is support for intensified Black Economic Empowerment policy (BEE). It is a deepening of the project that has destroyed the ANC, bringing the organisation into disrepute, into internal chaos and murderous lawlessness. Combining patronage with neoliberalism, as it did, the really existing “National Democratic Revolution” has been divisive, increasingly undemocratic and counter revolutionary. It has pushed working class communities and trade unions backwards with labour broking and mass unemployment. Right now it is also threatening basic democratic gains from 1994.

Still Malikane writes: “in so far as the tender-based capitalist class has begun a war against the dominant white monopoly capitalist class, it has to be encouraged”. Well, this is what the Zuma faction is doing. Consequently, Malikane distances himself from the calls for President Zuma to step down, by simply not mentioning it. He sticks to “the main contradiction”, like Chairman Mao, as it were.

We should step into a kind of stage where “white monopoly capital” for a long period is the only true enemy. It is a faction of the ruling class that is in coalition with “the credit-based black capitalist class”. Its “ownership and control of the state and the ruling party is being threatened by the rise of the tender-based black capitalist class”. That is why these tenderpreneurs should get our sympathies and support.

In the current situation, Malikane therefore proposes no measures against rampant corruption. He sees no threats to democratic rights and to the rule of law. Meanwhile, even the security cluster is becoming factionalised.

Indeed, in his first press conference, Finance Minister Gigaba stated that the policy of tenders and outsourcing will be “unapologetically” continued. Malikane’s support for this was indicated by his answers to City Press in an interview on 23 April. He defended Gigaba’s pledge to corporations and finance capital that nothing would change. He was surprisingly quoted saying: “Investors have to be assured that South Africa is a destination for investment. The Cabinet reshuffle shouldn’t lead to doubts. The ANC’s financial policy is still the same. We are on course.”

Malikane’s project for a “broad anti-white monopoly capitalist united front” or “broad anti-imperialist front” will serve as the Zuma faction’s left flank. It will fit well with Zuma’s latest speeches about “foreign influence”. 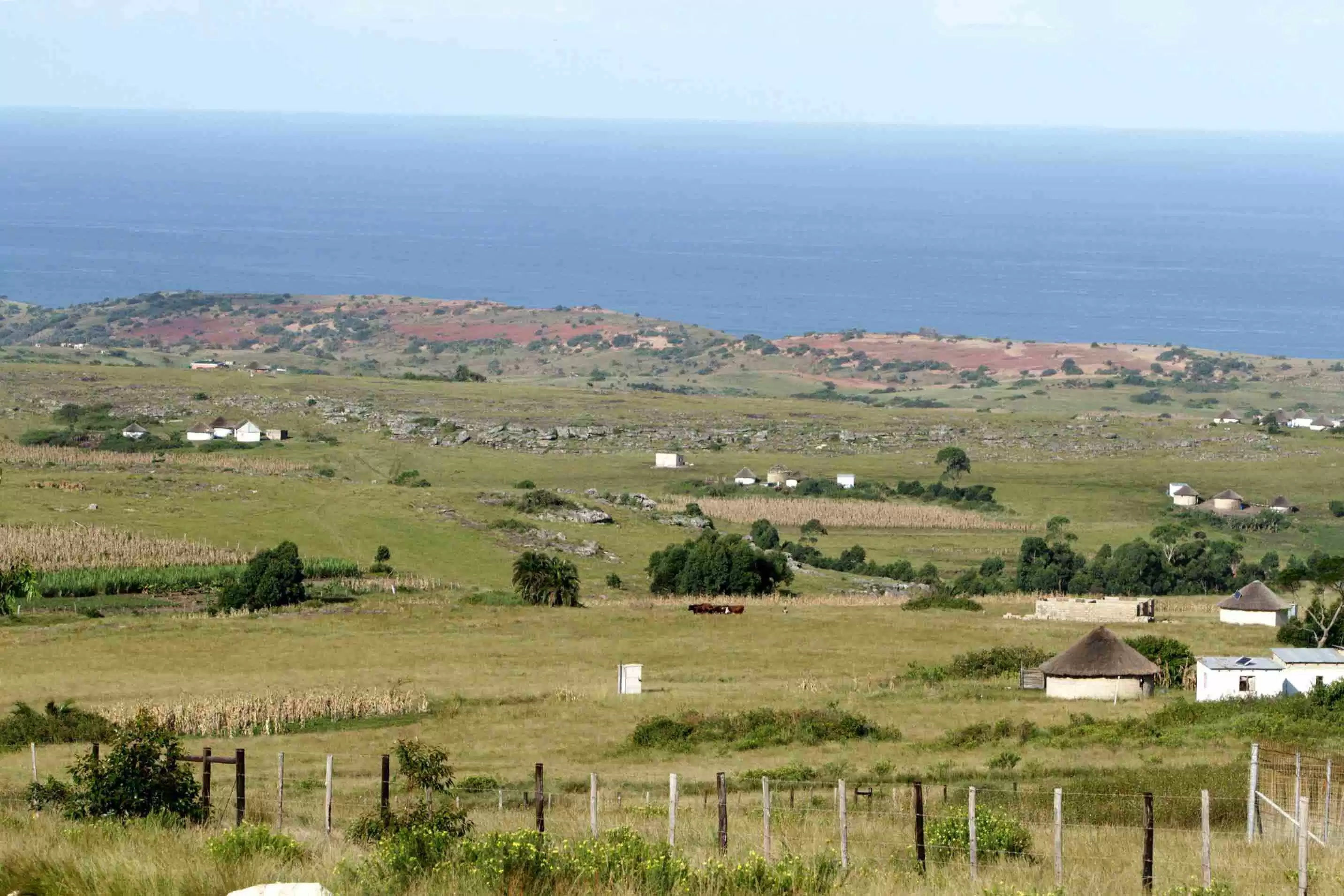 Mbizana, the area which is a target for mining, resisted by the local community. How would Malikane’s “broad anti-white monopoly capitalist united front” work out in Mbizana?

Concrete analysis of concrete circumstances is the living soul of Marxism, as Lenin once said. So, let us take a concrete example and apply Malikane’s strategic scheme.

Mbizana is a municipality in Eastern Cape. The largest private employer is the Wild Coast Sun. Mbizana is also the municipality of the coastal Amadiba community who are struggling against mining, in defence of their communal land.

How would Malikane’s “broad anti-white monopoly capitalist united front” work out in Mbizana, where Oliver Tambo was born and where the Pondo rebellion started in 1959-60? What are the class forces and where are the possibilities of progressive alliances?

The tourist attraction, the Wild Coast Sun hotel and casino, was established in the 1980s by evicting over 100 families from their land. Their land claim was recently successful, but it is right now under threat of being diverted by the mining lobby, the Amadiba chief and corrupt elements in the Land Department. Outsiders want a piece of the deal.

The Wild Coast Sun is owned by the transnational company, Sun International. The vast majority of close to 1,500 workers are casually employed, even those who have worked there for twenty years. They have just organised themselves in Amcu, after being let down by Satawu. The employer is unwilling to engage in negotiations. Many workers took part in an unprotected strike over Christmas. We will see what will happen with this struggle for workers’ rights, permanent employment and decent wages.

The BEE partner of Wild Coast Sun owns a 30% share in the casino (paid out as a multi-million rand “management fee” in order to avoid tax). This share is controlled by the local mining lobby – a group of about 15 local people, led by a Mr X. Mr X has organised a faction in support of his projects in the regional structures of ANC. Some of these projects are public works programme tenders for the Mbizana Local Municipality (where they always pay about R500 below the legal EPWP monthly wage of R1,800 per month, for some reason).

The same group is also flocking around SANRAL’s N2 Toll Road project. The road is planned to run between 3 and 5km from the coast, along the projected open cast mining area. It will divide the coastal villages with a fenced 100m wide highway. 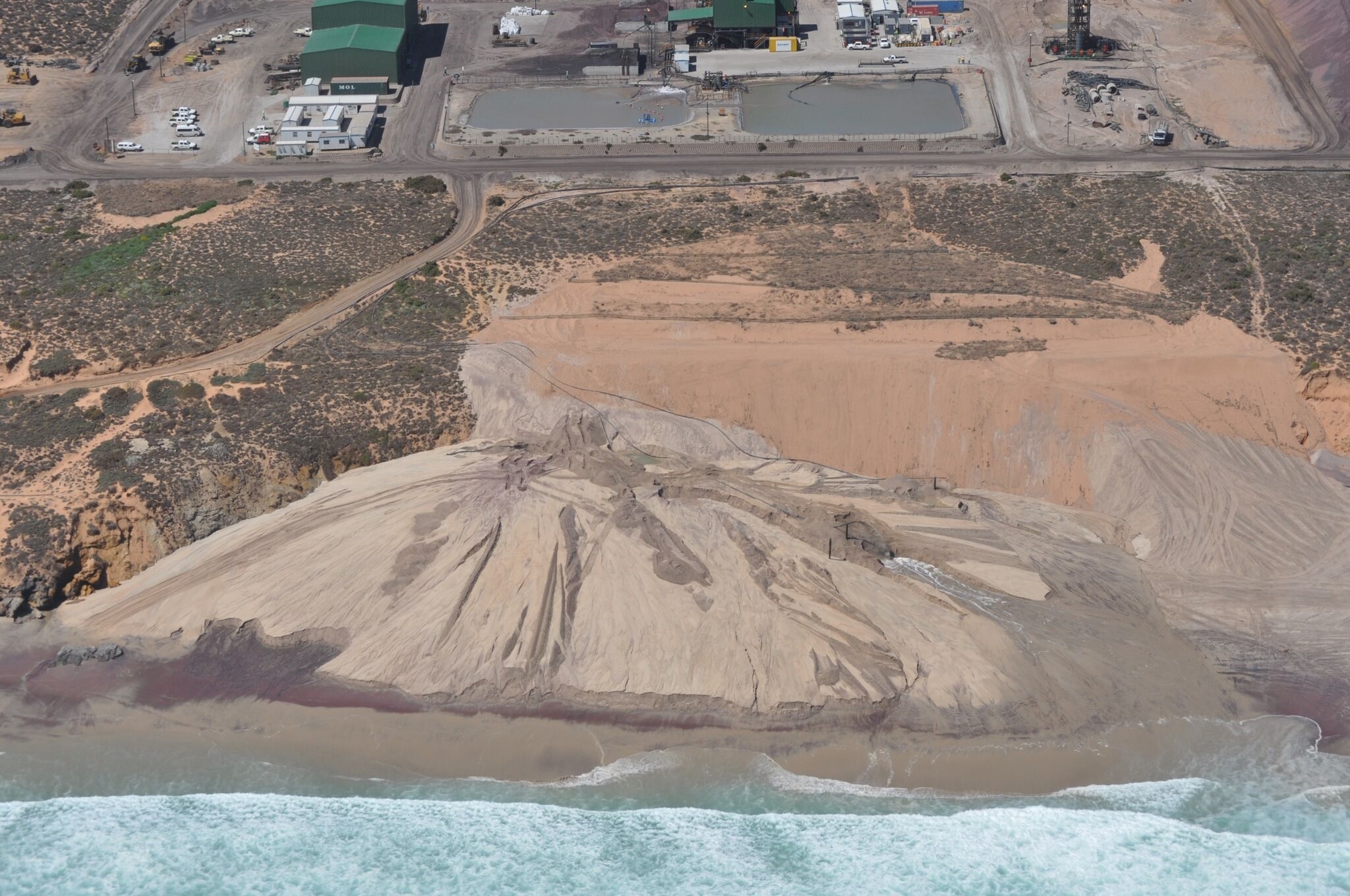 MRC, the company which wants to mine in Mbizana, already runs a controversial open cast mine north of Cape Town.

The same Mr X is a director in one of the subsidiaries of the Australian mining company MRC. MRC is the company which runs a controversial open cast mine north of Cape Town.

For 15 years MRC has fought for the right set up an open-cast titanium mine of titanium minerals on the coast at Mbizana, against the will of the coastal Amadiba community. As a director of MRC, Mr X signs all the affidavits for the company which is applying for the mining licence, TEM. The Amadiba chief is also a director of TEM.

The income to the BEE partner of the casino is supposed to be used by the Mbizana Trust for community projects, but the trust has lately come under community pressure, with suspicion of embezzlement and mismanagement. Just like almost all trusts in SA, its financials however are secret. The mining lobby controls who sits in the board.

MRC (which has not left the Mbizana mining project, despite what was announced last year) and the rogue business cabal is supported:

These forces meet regularly and coordinate all moves (court cases, police raids in the coastal community, allocation of tenders, nomination fraud in the ANC before the local elections, plans in Mbizana planning documents, violent efforts to abolish the oppositionist coastal traditional authority, and so on).

There is no clear-cut tender- or credit-based “black” capitalist class in this story. There is the rot in the ANC. There is the anti-community police force. There are the intransigent officials of SANRAL and the DMR. There is MRC.

Here, as elsewhere, there is also a fourth component coming to the capitalist party: “business kings, chiefs and headmen”, a process the Zuma government is trying to underpin with new legislation called the “Traditional Khoi-San and Leadership Bill”.

We cannot know, of course, what squabbles there are between the forces in that “alliance” about their share in the profits and projects: the local mining lobby and traditional business leaders, the new “black” capitalists, on the one hand, and MRC and Sun International (or SANRAL), on the other. But there is no “anti-imperialist”, “black” capitalist fight against any “white monopoly capital” to support. To propose such a campaign or front would be a dark joke. Should we campaign for the “black” capitalists to have a larger share in the Wild Coast Sun casino? More tenders from SANRAL? These are the same people held responsible by the anti-mining community for the assassination of Bazooka Radebe in March last year, allegedly backed by MRC.

What is needed in Mbizana is not a phony “broad anti-white monopoly capitalist united front”, promoting more “black” shareholding in historically white companies. Indeed, the government (and even the MRC) is already trying to play the “black” card in the community: Now the “blacks” are taking over the mining from the Australians, halala! This BEE move has been rejected with contempt by the community. The people laugh in anger at the constant efforts to confuse issues. Malikane complains that the black working class is led into confusion if the White Monopoly Capital issue is not raised. It is exactly the opposite.

What is needed in Mbizana, as in other places, is an alliance between the workers and the rural community, overwhelming the enemy with mass democratic action and education. For decent work and wages, for the kind of development and modernisation that people want.

For people’s power against the enemies of the people: the broad capitalist rainbow alliance, that hates progressive laws and democracy itself, always tries to stop economic emancipation of the majority and always rule by deception, confusion and violence.

Our new capitalists as “Black” or Non-White?

Whatever historical or present value the term has as an analytical tool, “White Monopoly Capital” (WMC) is increasingly used as a slogan. It is supposed to fool workers and communities so that they don’t oppose capitalism as such. It is there to whip up support for corruption when fierce opposition is what is needed. The WMC slogan gets its persuasive power by being opposed to Black.

For that reason I have written “black” in quotation marks before the word “capitalist”, questioning whether there is an attempted deception here. In reality, there is no reason why “black capitalists” should be supported by the black working class and rural poor. This is not the road. Perhaps we should draw on Steve Biko. Forty years ago he spoke of black police officers in service of apartheid as “non white”. We can stop speaking of Malikane’s “tender-based” and “credit-based” capitalist class as “black”. 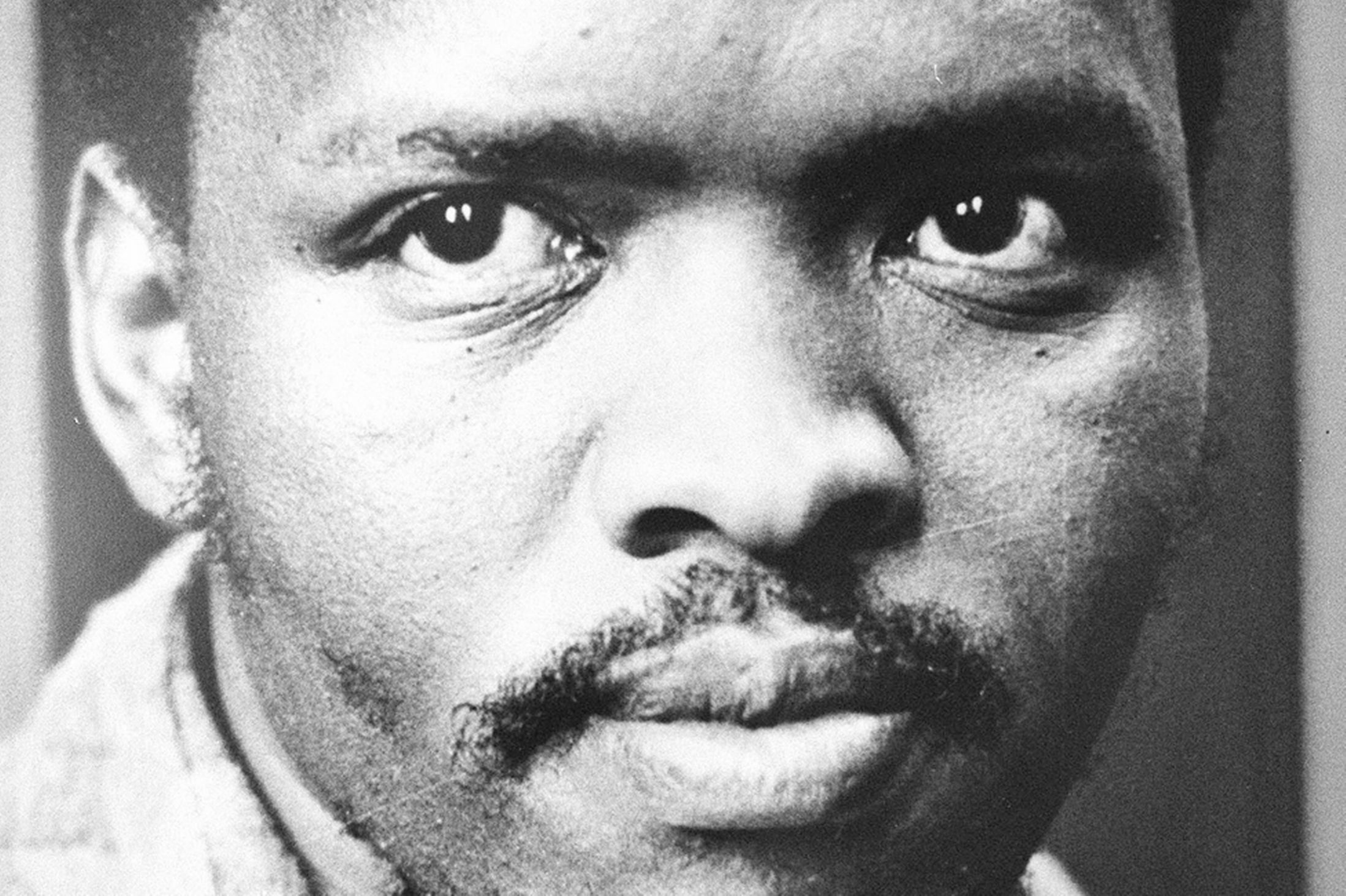 The concept non white appears in Steve Biko’s writings in The Definition of Black Consciousness (1971). The famous passage reads in full:

The fact that we are all not white does not necessarily mean that we are all black. Non-whites do exist and will continue to exist for quite a long time. If one’s aspiration is whiteness but his pigmentation makes attainment of this impossible, then that person is a non-white. Any man who calls a white man “baas”, any man who serves in the police force or security branch is ipso facto a non-white.

We can speak of them as non white. We can point to the fact that when they aspire to be rich they stand in opposition to the cheap labour of black workers that they exploit. They are a part of South African racist capitalist system. This might serve to defuse some of the spin doctoring in ANC’s factional battle and shed more light on the BEE policy (or rather the Non White Economic Empowerment policy) that has destroyed the ANC. This policy is blocking the whole black working class and rural masses from advancing. The burning issue is the crisis of racial capitalism and capitalist oppression.

It is perhaps a paradox that it is Steve Biko who can help us, putting colour-coding in the service of understanding class division, fighting confusion and capitalist propaganda. But this is South Africa.