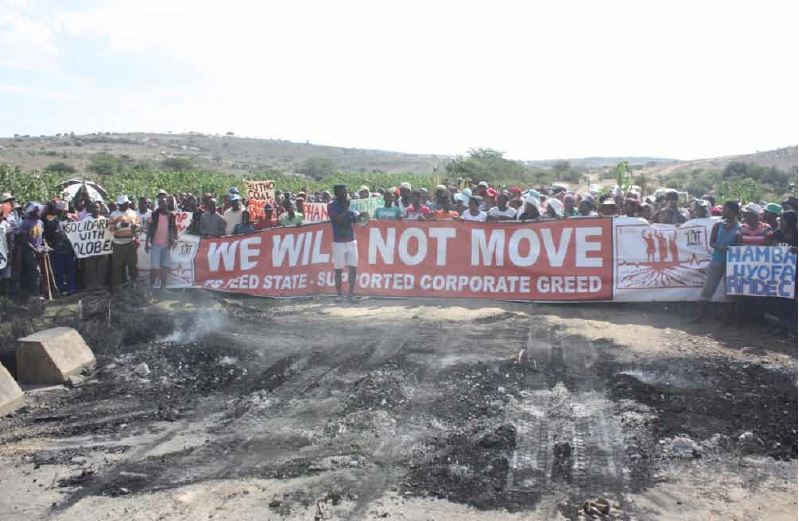 A blockade by residents of Fuleni, KZN, against Ibutho Coal´s proposed mine on the border of the iMfolozi Wilderness area.

In Amandla! 45, we reported on the cynical assassination of Bazooka Radebe, the chairperson of the Amadiba Crisis Committee (ACC ). ACC has been involved in a decadelong fight against an Australian mining company, MRC . MRC has shown that it will stop at nothing to win the right to make mining super-profits at the expense of the Amadiba coastal community:
• Within a week of Bazooka’s murder, the Legal Resources Centre (LRC) felt it was necessary to send out a critical press release about the investigation.
• The autopsy at the hospital in Bizana had been delayed for 6 hours by the responsible officer from Mzamba police. In endless discussions, he and the head of the morgue tried to block the independent pathologist from participating.

Within two days of the murder, the Port Shepstone SAPS had released the car hijacked by the two hitmen before the murder, to its owners in Joburg. No doubt by now it has been cleaned and is at the panel beater for repair of the bullet holes. The joint examination by The Hawks and a ballistic expert called in by LRC had to be cancelled. As an important piece of evidence, it was gone forever.

It is now over two months later. The Hawks have still not conducted proper interviews with leaders of the ACC , who spoke with Bazooka one hour before he was killed, when he said he knew there was a hit list.

There are right now too many places where hired thugs clash with communities and where chiefs are made directors in mining companies and their economy daughter companies. They are reinvented as “owners of the land”, so that they can sell it.

Such a process must be riddled with crisis and resistance in the new halfdemocratic dispensation. In addition, corporate land grab with the support of business-chiefs is in conflict with customary law and traditional land rights. In Pondoland this is a Permission To Occupy, a PTO . The PTO is approved or rejected by your neighbours. It gives no right to sell, only to use. The role of a chief or a headman is simply to stamp the permit.

Communities on their own

The re-colonisation of the land requires a lot of policing. There is the need to police the protests of the existing land right holders who are being chased away. And there’s the even greater need to “not-policing” the land grabbers. In Bizana municipality, the police refuse to investigate violence against those who protect community land. This is not only about the Amadiba community that is confronting the Australian MRC and its 22km strip mining project. Communities are fighting illegal sand mining on their own. One site of such a struggle is located only 20 km from Xolobeni.

In the meantime, Deputy President Ramaphosa kicked off the local election campaign in May in Bizana by speaking about “the Ocean Economy” and the class of new “Black Industrialists” who will arise out of it. The Ocean Economy means extraction of oil and gas from under the sea. It does not refer to fishing. Like sand mining next to rivers and river mouths, it will be another threat to fishing communities because of the risks of polluting the ocean.

The Department of Mineral Resources has abandoned its role as a regulator. This is best demonstrated in Mpumalanga. Communities are facing the coal mining offensive on their own. Mining companies tick boxes and invade. Anything goes.

An attack on the “communal mode of production”

At another level, this rural battle is also a battle for a 100% victory for the capitalist mode of production. Will the “communal mode of production” be defeated by this coalition of transnational corporations, the rising black business class and business-chiefs? Or is there an escape route along another development path that protects what should be protected and introduces a kind of modernity that doesn’t kill?

The battle is on. Enormous social forces are putting pressure on human, civil and environmental rights. The build-up before the local elections is ripping the ANC apart, along class lines. Only words are left of the new policy: to let communities at large elect the ANC candidates. On the contrary. Even the majority in an ANC branch can’t choose their candidates.

Business-ANC in action before the elections

In Bizana, there are complaints about election fraud in all wards. The fight over the councillor’s salary is a disruptive factor. But perhaps that could be controlled if it wasn’t for the business faction in the regional leadership of ANC. It leads to bussing people from another ward to capture branch meetings and the “disappearance” of membership lists.

In Bizana, the only candidates allowed are those who support mining and the N2 Highway. In the two Amadiba wards, half a dozen chaotic branch meetings have been held since December. They show an overwhelming majority in support of antimining candidates. In one ward a final election fraud again ended in chaos. In the other ward, the six-month battle started with 700 membership forms disappearing. The members were effectively kicked out. On 19 May, in Xolobeni, the excluded community simply locked the regional leaders in the meeting hall, stopping the mining candidate from being “elected”. This is the candidate who was seen during the beating of journalists and two locals after Bazooka Radebe’s funeral on 2 April.

Of course the EFF is breathing down the ANC’s neck in many Bizana wards! And the ANC is bringing it on itself.

Beside the pressure from the working class and the poor, what Amadiba Crisis Committee leaders call the Black Boers also face the “treason” of their big business partners. This can be illustrated by a coastal planning meeting on 23 May at the Wild Coast Sun casino.

Ms Mboniswa from the state road company SANRAL had the task of getting formal support for the “Green Route” N2 Highway. The mining project and the 80m wide and fenced-in N2 will together disintegrate the whole of Amadiba. And it will provide a road to the mining company. In January, SANRAL presented the N2 as a fact. In reality, SANRAL is caught in a web of deception and forgery before the court case. It is trying to kill the case by denying affected villages legal representation.

The Black Boers are strategically positioned in the coastal committee. They were amazed to realise that the gigantic N2 tenders were soon to be signed by the usual big companies. “But what is there for us?!” “What is this?!” The wife of the Amadiba chief raged.

This gave space for the questions: “How many wetlands will be affected? How much grazing land will be destroyed? How many schools must be relocated? How many homesteads? What will be the compensation?”

The questions were of course not answered: “There will be no schools relocated and the rest I will take outside.” The response to the question “where will it be, this N2?” was “It will be out there, somewhere.” Somewhere?! The SANRAL representative failed to get support.

Where the “Green Route” of the N2 Highway through Pondoland is planned has been a well-kept secret. Amandla! can however present the latest map. 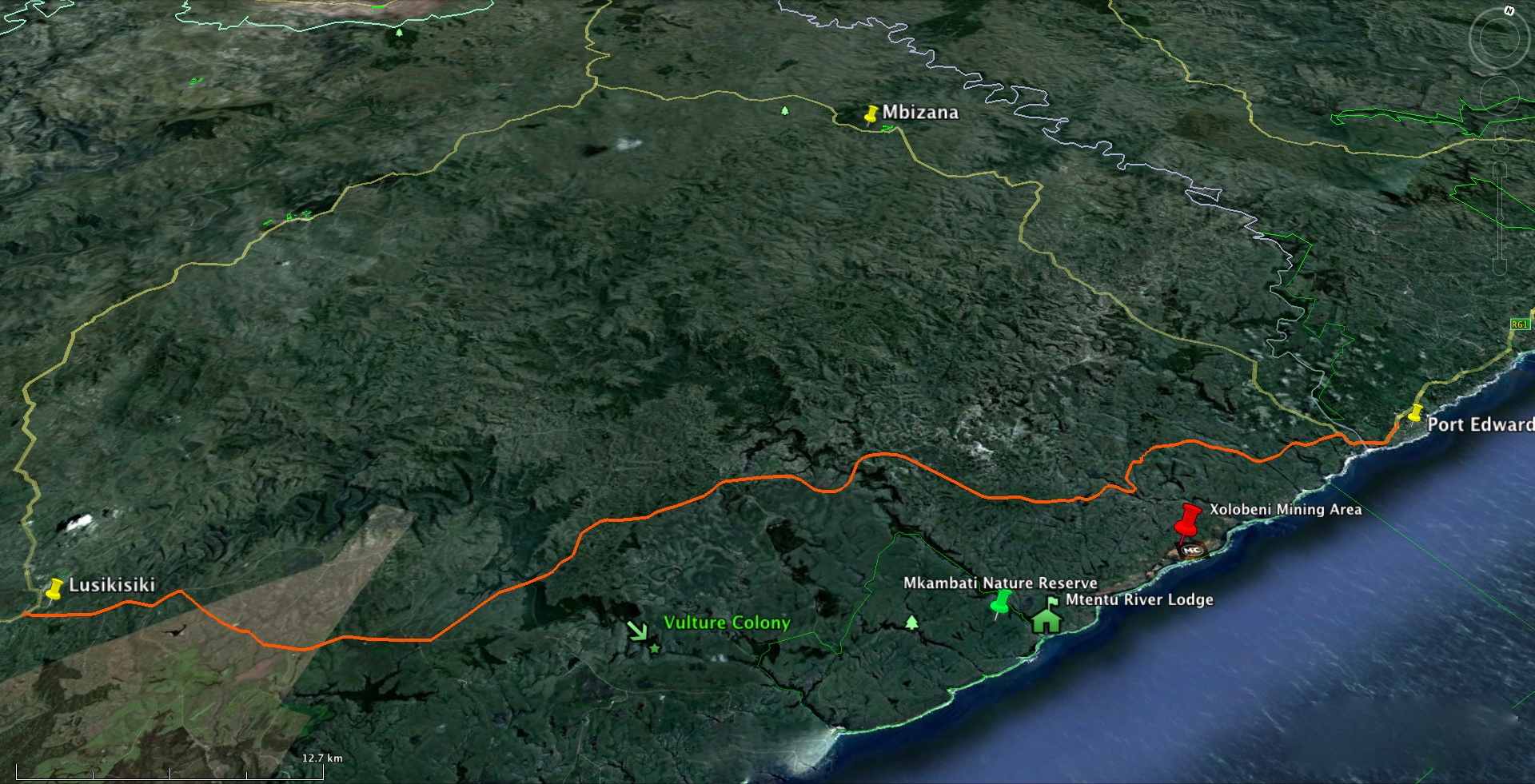