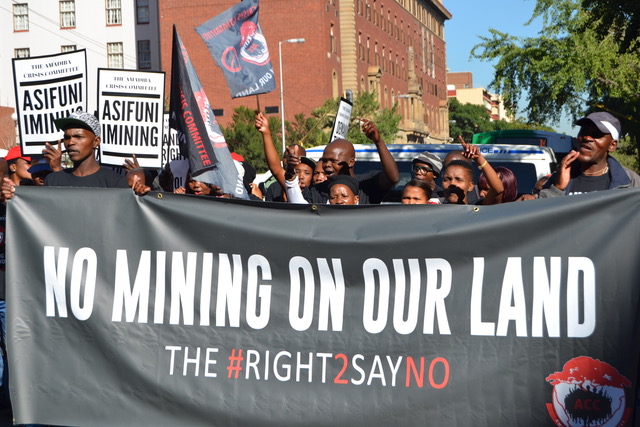 To implement the EMP, “Operational EMPs” must be prepared for each phase and section of the N2WCTR.

However, the Eastern Cape Department of Economic Development, Environment and Tourism (EC DEDEAT) does not have the Operational EMPs! We know this from a direct question to DEDEAT officials. It is therefore an open question if these documents exist. This is despite that the Operational EMPs must be approved by the Department of Environment, as stipulated in the Environmental Authorisation’s Record of Decision (see extract below).

If the “Operational EMPs” exist, ACC demands they are published by Sanral or by the consultant SLR.

There should also be regular EMP audits made (see Record of Decision extract below). If Sanral has bothered to do these audits, we demand from Sanral and the EMC that they are made public.

In this context, we urge the Green Scorpions to visit the Mtentu bridge site, where one of the two R1.8bn (and counting) mega bridges are planned. The Mtentu village on the Amadiba coast has a direct economic interest in protecting the Mtentu River. The Mtentu lodge is visited by many because of the rare Kingfish in the river.

This is just one example of suspected damages. Questions were also asked at the EMC meeting in May about contractors dumping land fill into wetlands and the pollution from portable toilets. Where is our government?

Our demand for transparency is supported in the law. In contrast, the EMC on its February 2018 meeting ordered the consultant SLR to remove the Biodiversity Offset Agreement (BOA) from its website (you can access it here). A journalist from SABC 50/50 who tried to film the EMC meeting in May was thrown out. This is EMC’s February 2018 minutes on secrecy:

The EMC also gave the “NMA Effective Social Strategists” a task to investigate how to hide “sensitive” information given at the meeting.  We challenge the EMC and Sanral to tell us and media what the basis is in law for this secrecy? We are not dealing with “business secrets” here.

The AmaMpondo people are most affected by the N2. The behaviour of Sanral and the deals with chiefs are already disrupting our communities, and there are impacts on the land and environment that cannot be rolled back.

The Constitution gives us right of access to information. This is necessary if we are to protect our rights, including environmental rights set out in Section 24 of the Bill of Rights. The right to information includes all that is reported to the EMC.

If the EMC is doing its job, they have nothing to fear. The EMC must be independent and not biased. To keep information secret about the social and environmental impacts of the N2WCTR is to protect Sanral and its sub-contractors from public scrutiny.

UNLAWFUL SECRECY LEAVES COMMUNITIES OPEN TO VIOLATIONS OF OUR RIGHTS.

It is time for the EMC to be transparent. Starting now, affected communities and the public must be given access to all the information about what is really happening.

Finally, we want to inform media what Sanral is legally obliged to do. The task of the EMC is to oversee this. The EMC would have full support of affected communities and the public when fulfilling its role. The EMC must not get involved in a game of secrecy. Where are the “Operational EMPs”? Where are the audits of the EMP?

• The conditions of the ROD, the mitigation measures and recommendations contained in the Final EIR and the final approved construction and operational EMPs and/or any other subsequent submitted approved documentation/Method Statements/plans, shall be legally binding components of any contract and must therefore be legally enforceable;

• SANRAL must use the draft EMP to develop final comprehensive site specific construction and operation EMPs;

• The final EMPs must at least have, but need not be limited to, the following headings: project phase; activity; environmental specification; and responsible person/s so that they are capable of being audited;

• The final construction and operational EMPs, and/or other required plans may be altered, where independent monitoring and auditing of the project show this to be beneficial. Any alterations to the final EMPs and other required plans shall be subject to approval by the relevant authorities;

• The Applicant must comply with the draft approved EMPs and any other subsequent approved documentation;

• The final EMPs and other required plans must be made available to I&APs upon request;

• The final EMPs and other required plans must form part of all contractors’ and sub-contractors’ conditions of contract;

• The final construction EMP must accommodate traditional issues and be sensitive to the fragmentation of families and clans;

• Before operation commences, an operational EMP, which includes a Maintenance Plan and an Emergency Plan, must be developed and submitted to DEA for approval. The applicable conditions of the ROD, the mitigation measures and recommendations contained in the Final EIR and supporting documentation dated December 2009, the draft EMP and final construction EMP, and any other relevant subsequent submitted and approved documentation/Method Statements/plans must be incorporated within the operational EMP;

• The operational EMP must be updated and resubmitted to DEA annually or within an agreed specified period between the relevant parties;

• The operational EMP will be subject to audits during its development as well as during its implementation; and

• The Applicant must apply measures to ensure construction and maintenance crews take ownership of the environmental management relevant to their work as per recommendations in the EMP.”

Where is the Honourable Minister of Environmental Affairs in all this. Where are you Edna Molewa?