Million Climate Jobs Monthly Meetings have been taking place at AIDC´s premises since 2012. The main items at its most recent meeting on 26th January 2017, was backyard agriculture using waste water. It was well attended by approximately 30 participants. 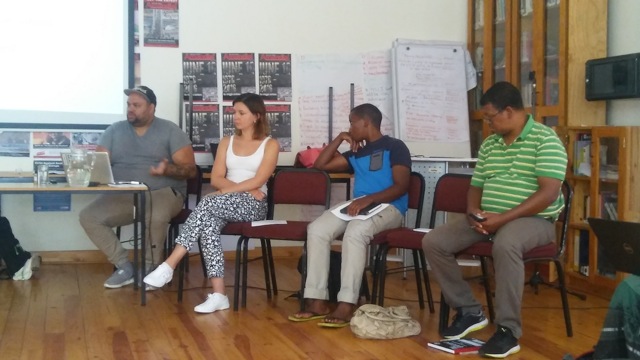 The main speaker, Robert Andrews, presented the system he has done research on for his master´s degree at the University of Stellenbosch.The system combines a fish tank with hydroponic grow beds. Fish contaminate the water they are living in with their faeces. The faeces consist of solid waste as well as Ammonium ions. A too high Ammonium concentration is toxic for the fish. Plants however are highly dependent on Nitrogen compounds like Ammonium. Hence plants can be used to filter the water for the fish. In Robert´s system the nutrient rich water from the fish tank flows to the hydroponic grow beds. Before it reaches the plants, the solid waste is separated in a quiet water tank and the remaining water has to pass a biological filter, where bacteria turn Ammonium ions into Nitrate ions that are better accessible for plants. The plants sit in small perforated plastic cups with their roots hanging into the nutrient rich water, so that they can absorb the ions. Finally, the filtered water flows back to the fish tank.In his experimental set-up Robert used Tilapia as fish and cabbage, spinach, tomatoes and green and red salad as plants. The fish as well as the vegetables can be harvested.

Apart from the production of vegetables and fish as source of protein and vitamins, Robert named several ecological and economic advantages of his system:
•    The circular set-up. A waterscarce country like South Africa cannot afford flow-through systems, especially now in times of draught.
•    The use of gravity minimizes the electricity costs for pumps
•    Relatively cheap building materials. A JOJO-tank serves as a fish tank, the grow beds are built from brick dams lined with plastic foil. Both are connected to each other with ordinary waste pipes.
•    Fish as a once-off investment. Tilapia fingerlings cost R 1.50. When male and female are kept together, they reproduce themselves

All in all the technology is attractive for backyard agriculture. Not only because of the output, people could also be employed in building and maintaining the system.

Lucia Winkler: Rainwater Harvesting Cartoon
Lucia showed the latest version of her cartoon. The audience suggested to add explanations about the possible uses of rain water. The discussion revealed, that most of the activists deem the short film useful to educate their communities about the benefits of rainwater harvesting. Lucia promises to present the final version of the film at the next Million Climate Jobs Meeting.

James Irlham: Fossil Free South Africa
In 2016 some progress was made in committing the UCT to an ethical divestment strategy. There is a new Green Campus Committee, covering campus action and students’ mobilization, which will also be taking about divestment issue.

Fossil Free SA has engaged with the City of Cape Town, which is surprisingly open to divest.
In order to answer the question of where to put the funding, fund managers are preparing a list of alternate fossil free portfolios.

Liz McDaid: Nuclear Deal
The government has been taken to court, because they did not consult the people concerning the nuclear deal. The most recent court case took place on 13th December 2016. The government tried to sneak out by giving the parastatal ESKOM the sole responsibility. ESKOM is now supposed to speak at court as well. By now it is not sure, whether ESKOM are going to appear or whether they just state their position in documents. A subsequent decision by the judge prevents ESKOM delaying the court case any further.
The next court session is going to take place on 22nd March. Right to Know plans a protest march to court.

Secondly Richard presented a proof of ESKOM misleading the public about the costs of renewable energies. ESKOM claimed that renewables have costed the economy R 9 billion in 2016. This is based on using a formula that was developed for the constrained grid in 2015 but not for the conditions in 2016. In addition, the high costs caused by the delay of Medupi and Kusile as well as all the costs of externalities were just ignored. Richard promotes the idea of seeing investment in renewable as a kind of school fees: It might seem expensive for now, but South Africa will take advantage in the future.

Richard also informed the audience about ESKOM´s “Application for postponement of the minimum emission standards for the Medupi and Matimba power stations”. ESKOM has already succeeded in pushing back the original implementation date of 2015 to 2020 and is now trying to delay it still further by 5 more years. Participants pointed out that, while it was easy to see why ESKOM should be seeking these perpetual delays in meeting basic legal standards, the questionwas why the Government agreed to these delays.

Jeff Rudin: Basic water under threat
The Government announced that it can no longer afford the free basic water amount of 25 litres per person per day.  Instead of rolling out the constitutional right for water they are wanting to roll back an already unacceptable level of free basic water.

Lucia Winkler: Coal Phase-Out Plans in Germany
Germany already gets one third of its total electricity from renewable. 40% comes from coal fired power plants. The Federal Government has now issued a climate protection plan, which limits the emissions by the German power industry to 183 Million tons until 2030. That is approximately half of the recent emissions. A further survey suggests detailed measures to cut down the emissions, such as a maximum age of 40 years for coal fired power plants, a tax on fuels, a national surcharge on carbon dioxide emissions and an annual emission limit for power plants. The coal phase-out plans are going to play a role in the election battle prior to the Federal Government Elections in September.

Lucia has translated a German newspaper article about this topic into English. The article will be sent out as an e-mail-attachment to all participants.

Next meeting
The meeting agreed to leave the main topic and date of the next meeting to AIDC to decide.  More information will be sent out soon