Book Launch – Renewable Energy: Where are the jobs? 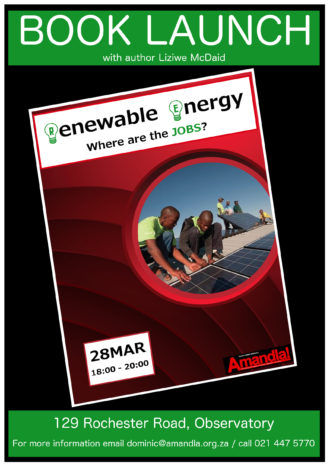 Book Launch – Renewable Energy: Where are the jobs?

The long awaited AIDC-commissioned research – RENEWABLE ENERGY: WHERE ARE THE JOBS – A Critique Of The Government’s Socio-Economic Programme – will be launched at AIDC at 18.00 on the 28th.

Liz McDaid, the well-known researcher and social activist, will introduce her research findings and recommendations.  The meeting will be Chaired by Tasneem Essop, former Provincial Minister of Environment, Planning and Economic Development in the Western Cape and a current member of the National Planning Commission.

There will also be lots of time for questions and discussions, which can include Eskom’s threatened closure of 5 coal mines which Eskom claims to be a direct consequence of the government’s renewable energy programme.