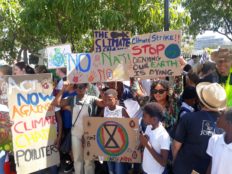 The event taking place today, the world’s first Global Climate Strike for the Future, is destined to make a profound mark. Something that should make everyone stop and reflect is the fact that it is the teenagers and young people from 80 countries around the world, and students from thousands of cities, who are leading this initiative. Indeed, things look even more dramatic if we look at the data provided by the UN’s sixth Global Environment Outlook report just presented at the climate summit underway in Nairobi.

These facts should lead us to think twice because, for the first time in human history, we are close to catastrophic processes which will determine the living conditions of future generations on Earth, and even though we are certain and aware of them, we are failing to act.

Instead, we let the governments and political forces organize pompous international meetings, destined to change little or nothing about the mechanisms that are causing the climate to heat up, and we continue living the consumerist lifestyle that is pushing the planet towards destruction. That is why the fact that young people—to whom we are leaving a legacy of impoverished and inhospitable habitats to be fought over by a growing population—are assuming the roles of protagonists with a worldwide protest movement is a heartening development that gives one hope.

They are going on “strike,” signaling their disobedience and refusal to work—in this case, a refusal to attend school—something that gives a special character to this event, and at the same time shows the tragic problem with the current global situation. The kids are the ones going on strike, and in effect striking against their own interests, losing hours of their studies. Yet everyone else is not striking: the adults, factory workers, employees, executives, all the figures who would actually be able to do serious economic damage to the extractive capitalists responsible.

It should have been us, the adults—who have been enjoying, and still enjoy, the comfort made possible by the destruction of the Earth—to rebel and organize a general strike to stop the infernal machine that throws 1.3 billion tons of food per year straight into landfills, dumps the excrement from 24 billion farm animals into the waters, fills the air with CO2 and other greenhouse gases, floods urban areas with millions more cars than they can support, and is heaping up mountains of technological waste (e-waste) around the world—whole mountain ranges born out of planned obsolescence.

While it’s all too easy to sit and draw conclusions on the occasion of this memorable event, it is important to also call out a warning and an alarm. Young people cannot hope to win the war with one battle, because they cannot afford the delusion that those who are governing the world economic order care even the slightest bit about their future and that of the Earth. They will destroy even the last strip of fertile soil and dry up the waters of the Earth to the last drop, as long as they are able to draw some private profit from it.

And there is no argument that will stop them or lead them to take another route, except for hitting them where their vital interests lie. To this end, the protest must take a systematic and structured form, bringing the fight to several fronts. It must put pressure on the governments, involving all the many forces which are now engaged in these struggles, for the ecological re-conversion of the cities (full recycling of waste, the spread of solar power, limiting urban traffic, the reuse of waste water, a stop to the destructive spread of cement, etc.). Furthermore, it must also set up systematic campaigns of boycott against goods produced using systems that are destroying natural habitats.

The young people need to be aware that there is no more time, and that the moralistic sermons and the lofty rhetoric of the political class are not going to make the mechanisms in place budge even an inch. It will takes weeks and months of a “consumption strike”—boycotting meat from factory farms, the products of industrial agriculture, goods designed to break, the whole American lifestyle imposed by US capitalism on the world—if one wants to succeed in pushing the powers ruling over production, which are currently dominating the planet’s economy, onto a track compatible with the survival of the environment.

The young people have chosen the right path. Like the women of Non Una Di Meno, they have understood that the struggle must have an international scope and must take the form of a strike: that is to say, of a full-on struggle, a conflict against an opponent who is defending the status quo, to which its interests are tied. For over two centuries now, the working class has managed to bring industrial society progressively forward, decreasing the length of the working day and increasing wages, promoting innovation by means of long and costly conflicts. Today, there is simply no other way to save the planet.