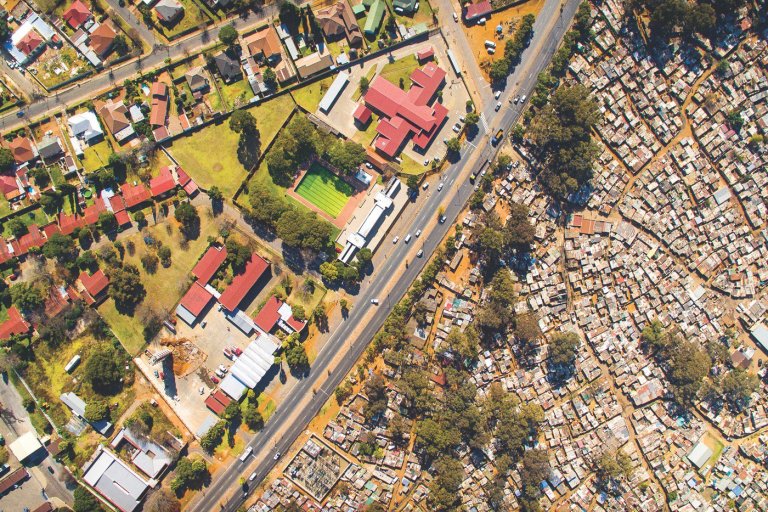 The purpose of this brief is to provide an overview of personal income tax in South Africa. To download this brief as a pdf click here. It specifically focuses on the failures of tax policy in South Africa to function as a redistributive tool in light of a commitment to a progressive tax regime which levies higher taxes as one ears more income. The reasons for government’s failure to undo income inequality through taxation are linked to compromises made during the 1994 negotiated settlement.

In South Africa, there is resentment at having one’s “hard-earned” income taken away in the form of taxes. In the 2018 financial year, personal income tax collected from individual taxpayers accounted for 38.1% of all tax revenue – double the amount collected from companies in the form of corporate income tax[1]. Of the 56 million (as of 2015/16) South Africans, 13% are registered taxpayers. And of this 13%, the top 1% of taxpayers comprising 800 000 people earning income above R500 000, are said to be paying 61% of the total tax bill[2]. 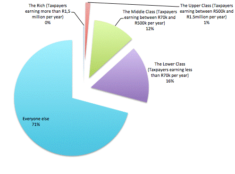 At a first glance, it may appear unfair to impose a burden on 1% of the population for almost two thirds of the total tax revenue. But, this ignores the fact that South Africa has the highest income inequality in the world. The tax statistics are only reflective of that reality, because the rest of the population doesn’t earn annual income above the tax threshold (R79 000) requiring them to pay tax.

The top 1% of the population has experienced significant growth in income, averaging a compounded growth rate of 5.43% over the years 2003-2015, whilst the majority (at least 80% of income earners in South Africa) have experienced declining negative growth in income over the same period. 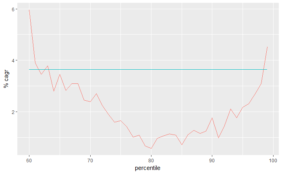 It is therefore surprising that this same group complains and resents paying tax, when it benefited the most from South Africa’s economic infrastructure, supported by worker’s labour, which in part is up kept by tax revenue. More than that, this current arrangement where 1% of the population is responsible for two thirds of all tax revenue, is an indictment of the failure of tax policy to redistribute income. And perhaps greater than that, it also reflects where the centre of power truly lies in South Africa – in a tiny minority which controls the economy and dictates economic policy and outcomes. Therefore, the redistribution of income is at once an economic and political imperative.

This leads AIDC to advance the argument for progressive taxation, where an individual is taxed based on the ability to pay, and is taxed more as this ability to pay increases. For example, we would subject the increased 5.65% growth in income for the top 1% to tax at an increased rate. Although purportedly adopted in South Africa, tax policy since 1994 has actually been regressive. It has had the effect of decreasing the effective tax rate on individuals earning higher income over the years 1994-2015.

In part, progressive taxation is meant to function as a redistributive tool by means of taxation. This is particularly critical in a country like South Africa with the highest income inequality in the world – also evidenced in the fact that just over 1% of the population can afford to pay tax.

The South African tax regime is based on a graduated tax bracket system. For the 2019/2020 year, individuals under the age of 65 will be subject to tax if their income exceeds a threshold of R79 000.

However, though seemingly progressive, the effect of tax policy in South Africa has undermined its redistributive potential (Forslund, 2016:9). For example, in Table 1, one can observe that the tax thresholds have been consistently increasing (as a consequence of the increase in the annual primary rebate – a deduction from tax payable available to all individuals). In 2016, the Alternative Information and Development Centre (AIDC) published a report on personal income tax in South Africa, illustrating the consequences of the negotiated settlement on tax policy.

A vital compromise was made with respect to the size of the of the tax revenue collected relative to the size of the economy or the gross domestic product (GDP) – directly affecting the capacity of the state to provide services to people. This in turn had two severe consequences:

The resultant effect of this compromise was in the stifling of the potential of tax policy to redistribute income. Effective tax rates for personal income tax have been consistently declining compared to their levels in 1994. 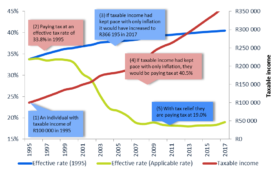 The important schedule (line) in Figure 3 above is the falling gold/yellow schedule. The red schedule shows the effect of inflation on the value of money. The right scale in the diagram shows that a taxable income of R100 000 in 1994 is equivalent to R310 000 in 2014 in terms of buying power. This income level was taxed at 33.8% from 1995 to 2000, but only at 18.2% in 2014. As such, the idea of an increasingly harsh personal income tax is completely wrong. In fact, it is the complete opposite that is true.

The explanation for the diminishing personal income tax represented above is that it is actually part of the government’s adopted policy. To keep the public sector small, the government has time and again granted huge tax reliefs to taxpayers.

The consequences for public services such as quality healthcare, housing, water, electricity and sanitation, have been dire. Large segments of the South African population who require these services from government have been left destitute as many are homeless, leaving in squatter camps, with no access to water or electricity.

This brief has provided an overview of personal income taxation in South Africa, and its intended use as a form of a progressive tax regime for the purpose of redistributing income. This is an important goal in light of South Africa’s extremely levels of income inequality.

In so doing, the brief also highlighted the history of South Africa’s tax policy and the resultant effect it has had on the ideal of progressive taxation.

The brief illustrates that South Africa has failed to progressively use taxation as a tool to fairly redistribute income from high income earners who can afford to pay taxation, to the social and public benefit use of public services which predominantly poor people rely on. As a result, income has remained concentrated in a tiny segment of the population (literally 1%) who hold the majority of wealth and income.

[4] Read more about the importance of the tax to GDP ratio as an indicator of government’s ambitions and the quality of public services: https://aidc.org.za/download/taxation/Taxation-booklet-AIDC-FINAL.pdf

2 comments on “Personal Income Taxation in South Africa: The Struggle Against Inequality and Poverty in an Era of Crisis”