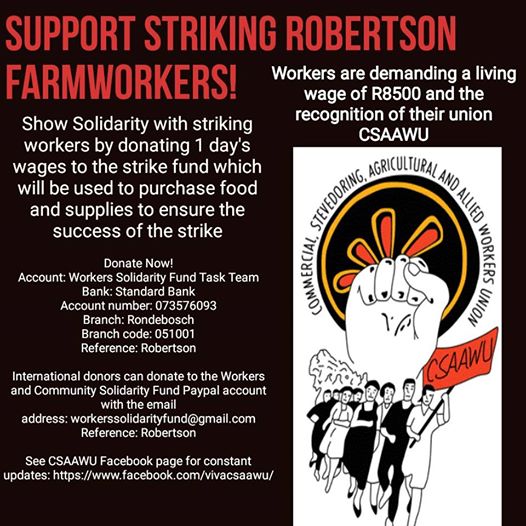 Last week, (19 – 21 October) negotiations between the Robertson Winery management and the workers ended in a stalemate after management refused to bring an offer to the table. The bosses insist on only offering an 8% increase. This is an insult to the workers.
Good news is that Robertson Wines have been pulled off the shelves in Denmark after the screening of a documentary which shows the working conditions of workers on wine farms.
The film describes widespread violations of labour laws, including workers receiving R105 for a 12-hour shift, exposure to toxic pesticides without protective gear or training how to use the chemicals, shocking living conditions, deductions of up to 80% from wages and an unofficial dop system.
From Boycott Robertson Winery solidarity group:
Robertson Winery must comply with the South African legislations. This employer must comply with the Labour Relations Act as amended by ensuring that, Equal pay for the Work of Equal Value becomes the order of the day. We refute the claim that, there are no black artisans in South Africa in so much that Robertson Winery only employs white artisans. We regard this as an explicit form of discrimination. This company has responsibility to provide necessary training to all employees in line with the Skills Development Act.

We remain very much concerned about Wine and Agriculture Industry Ethical Association (WIETA) which is regarded as the body that ensures that fair labour practices are employed by producers of farm products. This is one of the best principles that had been breached by Robertson Winery employer and WIETA remain wordless. Silence of WIETA at this crucial time means approval of this barbaric act against poor workers. We have also noted with extreme discomfort that one of Robertson Winery subsidiary companies, called Robertson CO-OP, is busy intimidating and victimising CSAAWU members.

We are pleased by the support of international community in Europe which led to a 20% drop of Robertson Winery wine sales in the European market. We salute Robertson Winery workers under the leadership of CSAAWU, in their struggle to dislodge the logic of capital at the point of production.

We are calling on all community members from Robertson and surrounding towns not to see this as job opportunity but to join these workers in advancing the struggle against exploitation and racist behaviour in the form of a United Front.