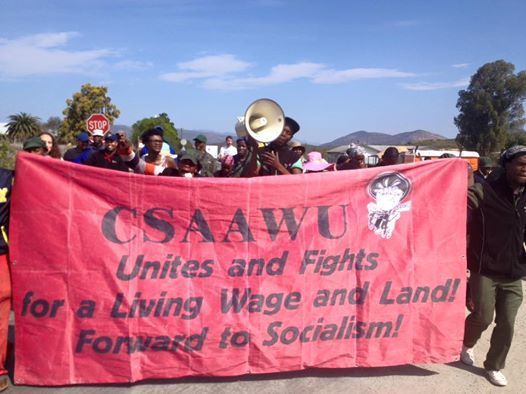 The exploitative working conditions of the Robertson Abattoir were recently exposed in various newspapers. Workers we talked to in the township of Mkqubela shared their experience of being treated like slaves while they were employed at the abattoir. Then, five months ago they were fired. Most workers at the Robertson Abattoir were paid a basic wage of R320 a week, with no benefits.

Slaughterers were often forced to work excessive hours, sometimes for 36- or 18-hour-long shifts, and were not allowed to refuse overtime duties. One of the workers, named Innocent, explains: ‘When we took a day off, the foreman of the abattoir would come to our home and threaten us by saying that if we stayed home we would never be able to do so again.’ Not only were they working for more than a full day in a row, but they were also expected to clean up the blood and residue afterwards, which is completely outside their job responsibilities. Their employer refused to provide cleaners, says Isak.

‘On a good day, we would arrive at the abattoir at 6 am and finish slaughtering at midnight. With the hour of cleaning we were never home before 1.30 am. The abattoir doesn’t have showers. So the bad smells of the meat meant we had to wash before going to sleep, leaving us hardly any chance for rest. We had no time with our families. My wife and children would be asleep when I left for work and asleep when I came back,’ says Isak.

Sandile tells us that if members of their families were sick and they asked for financial help for medical purposes, ‘our boss would tell us he wasn’t a bank, and that that’s where we should go if we needed more money’. Dismissed workers would have to leave the same day, without receiving their weekly pay.

There is no disciplinary committee at the abattoir, and workers could be fired verbally. One worker says, ‘People could be fired at any time for no specific reason. You could be fired if you talked back inappropriately. If he told you to jump, you had to jump as high as he wanted you to.’

The abattoir is a terribly dangerous working place. Accidents are frequent when people use knives for more than 15 hours in a row, and the workers often cut themselves. ‘When we were in pain or bleeding, we were told to use toilet
paper’, says Isak. The slaughterers were given overalls, but no gloves; they cleaned the carcasses bare handed. They could slaughter up to 1 000 carcasses in a day, when their contract aimed for 600 a week. Eric had been working at the abattoir for 13 years. He was often there from 6 am to 7 pm the next day. After thirteen years he was making R600 a week, which equated to a R20 raise a year. ‘I never took any days off or received any holidays and I was never paid for my overtime work. They used to tell me others would take my job if I didn’t come.’ 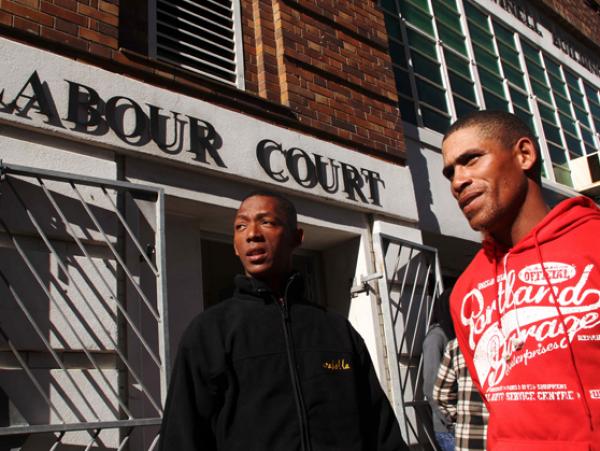 39 workers have gone to the Labour Court to challenge their 2010 dismissal from the abattoir after complaining about poor working conditions.

The workers were illegally locked out a few months ago and have been unemployed since. It is even more aggravating that each of them is responsible for supporting and feeding on average five people. CSAAWU, their union, has been campaigning to raise food and funds for them. Their wives are seasonal workers on farms and are employed for three to four months a year only. When they do work, it’s from 6 am to 6 pm doing exhausting fruit picking for R40 a day. Some of the abattoir workers live in shacks and have been on the RDP housing list since the 1970s … In the reception lobby of the Robertson Abattoir there is a sign on the wall that quotes the Qu’ran, Hadith 12. It says, ‘None of you truly believes until he wishes for his brother what he wishes for himself.’

These stories start to paint a more accurate picture of the hardship experienced by the vast majority of workers in South Africa. The idea that workers in South Africa are unproductive and over-paid is a complete and utter myth. Every rule has its exception. The few well paid workers are the tiny minority on the right side of the apartheid wage gap. When the majority of workers earn less than R2 500 per month it becomes clear the impact mass unemployment is having on holding wages down. Whereas apartheid, the migrant labour system and the Bantustans were the main way of guaranteeing cheap wages, unemployment and globalisation where workers are forced to compete with the lowest paid workers in the world is sufficient for reproducing the cheap wage system critical to the functioning of South African capitalism. A living wage and decent work remains a distant dream for the vast majority of South African workers nearly 20 years after the end of apartheid.