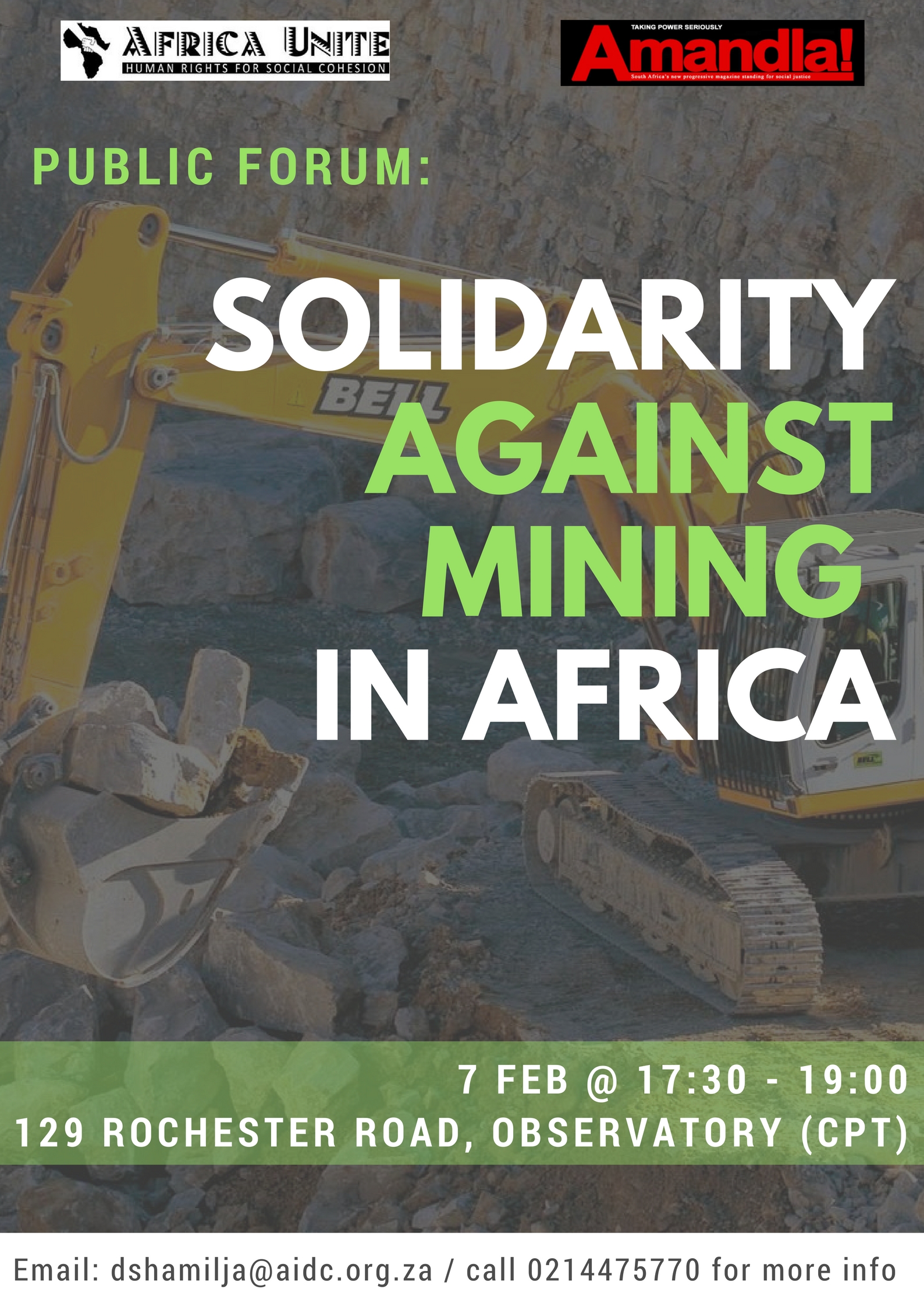 Parallel to the Alternative Mining Indaba, Amandla! and Africa Unite are hosting a forum to discuss the issue of extractivism in Africa.

Being at the heart of local, regional and international mining interests, the Democratic Republic of the Congo faces severe human and environmental right abuses. Our two guest speakers from DRC will deliver insights into the current socio-political situation and discuss with us how to intensify social corporate responsibility, improve relationships between investors and mining-affected communities and strengthen their right to say no to mining.

From a South African perspective, Nonhle Mbuthuma will introduce us to the resistance of the Amadiba Crisis Committee, a powerful example of how a community came up with their own self-determined democratic development alternatives, even before mining was practiced in the area.

Aiming at creating large public awareness and mobilization about the impact of mining in Africa, we hope to create a platform for solidarity against extractivism – not only in DRC but in all affected African countries.

Soranya Aziz is a Congolese development specialist and Executive Director of NYOTA, a development NGO training local NGO around industrial projects. She is also an activist in the youth citizen movement LUCHA (“Lutte pour le Changement”, meaning “Struggle for change”) and has been awarded for several times for her contributions to the Congolese local communities.

Médard Abenge, originally from DRC but based in Johannesburg, is a former lecturer at Wits University and currently work as a freelance communication service provider for regional, Pan African and international organizations. Founder of the South African Forum for International Solidarity, Congolese Diaspora Networks, Médard Abenge is the current Secretary General of the African Diaspora Forum, the federation of migrants’ communities living in South Africa, Executive delegate of the Congolese Diaspora Forum, and Secretary General of Congo Heart of Africa.

Nonhle Mbuthuma is an activist and spokesperson of the Amadiba Crisis Committee (ACC) which fights for land and environmental rights in South Africa’s Eastern Cape. As a crucial link between the indigenous community and the ACC’s legal team, she also engages the community in farming and food security workshops and has launched such projects in local schools. In 2008, Nonhle survived an assassination attempt, and threats have escalated since 2015 when the entire coastal community organized itself against an open-cast mine planned for the Amadiba coast.