“But he is politically important”: silencing women in activist spaces – reflections on #menaretrash Amandla Forum

But he is politically important”: silencing women in activist spaces – reflections on #menaretrash Amandla Forum 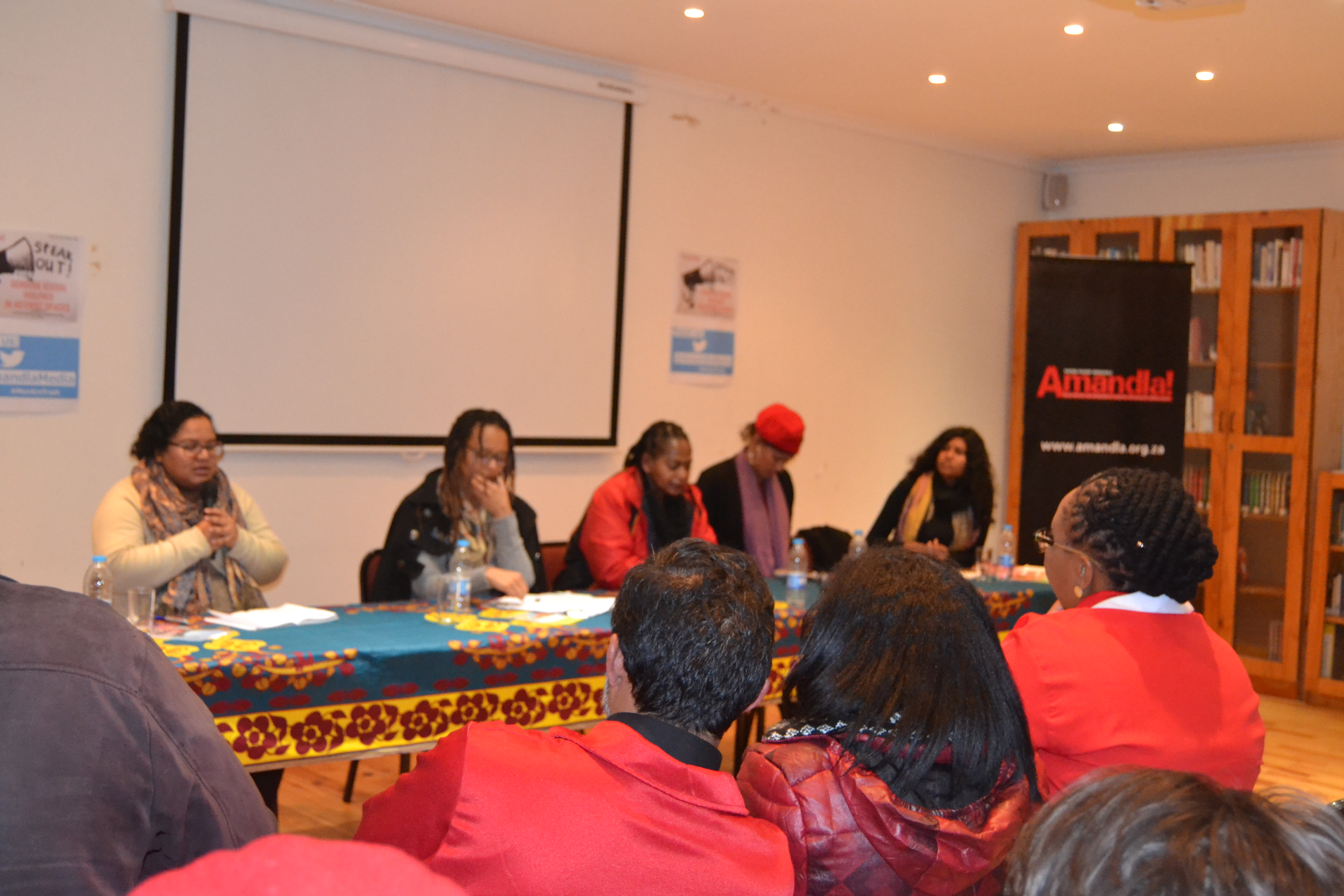 The #menaretrash Amandla! Forum happened in a room full of people from political parties, social movements, NGOs, trade unions, universities and the non-affiliated. The panellists were Leigh-Ann Mathys (EFF); Nomvume Ralarala (Saftu); Asanda Benya (UCT); and Kim Pillay (New World Foundation). The comments, questions and discussions that followed from the floor went to the heart of the issue that the forum sought to raise: how do we begin to speak about the silencing of gender-based violence in progressive spaces as a political issue?

One of the key issues that came up repeatedly from the floor is how reports of sexual violence are dealt with inside organisations that for the most part present themselves as progressive. What followed was, in my opinion, the beginning of theorising the toxic masculinities that inform organised politics.

It has become a common feature of anti-rape campaigns to use the slogan #realmendontrape. Whilst appearing to be progressive, this also externalises rape as something associated with “bad men.” Yet statistics and testimonies of women frequently reveal that men who rape, assault or harass are friends, relatives, work colleagues, neighbours. They are far from being people who do not appear to be “bad”.

In many cases, rapists hold positions of power in their locations. It may be someone who is wealthier, a boss in a workplace, a pastor in a church, or lecturers in universities. What concerns us here is that they may also be leaders or “comrades” in activist spaces like the party, union, social movement or some progressive NGOs and community organisations.

There is a particular kind of silencing that takes place within these spaces. These are men and women who claim to be progressive and to have “progressive” politics, usually defined in race and/or class terms. When women within these organisations report, and many times they choose not to, it is often in the knowledge that they may face serious intimidation, ridicule or even alienation within the organisations. This happens even though claims are made about equality or women’s rights, and there are structures in place to deal with such charges. 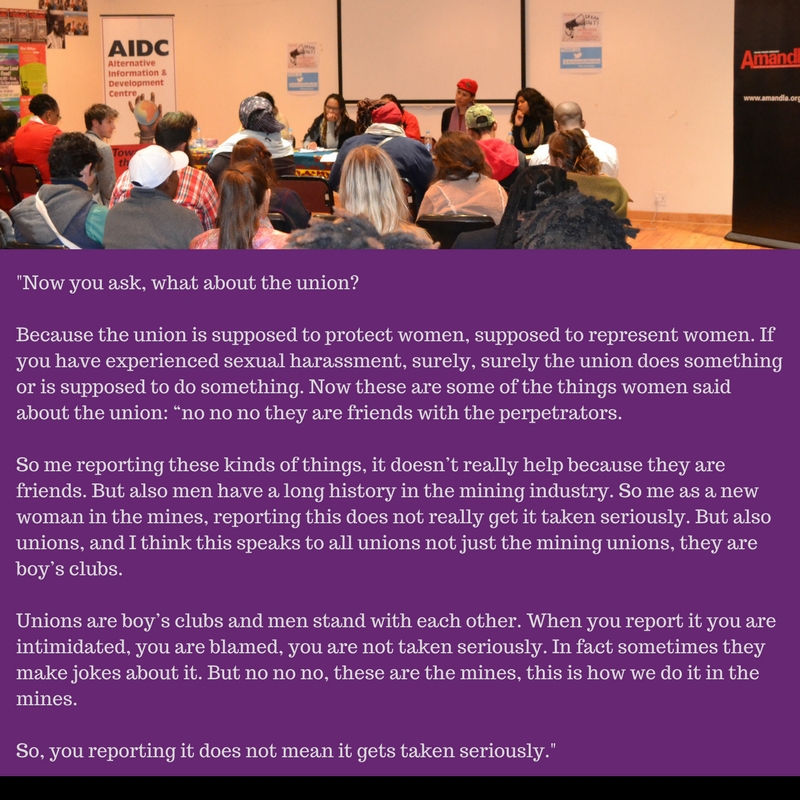 The failure of these mechanisms is perhaps where we can locate “comrade” culture: the belief that when women report that a “comrade” has raped or assaulted them it is not seen as a political issue. There are pointed efforts made to protect such men from any repercussions.

There are usually multiple reasons for this behaviour: on the very basic level is the idea of friendship. Men (and women) will protect a man because they believe he is a good person who cannot be capable of something “like that.” Rather than investigating the issues and taking the charge seriously, they choose to believe the woman is lying or over-reacting. 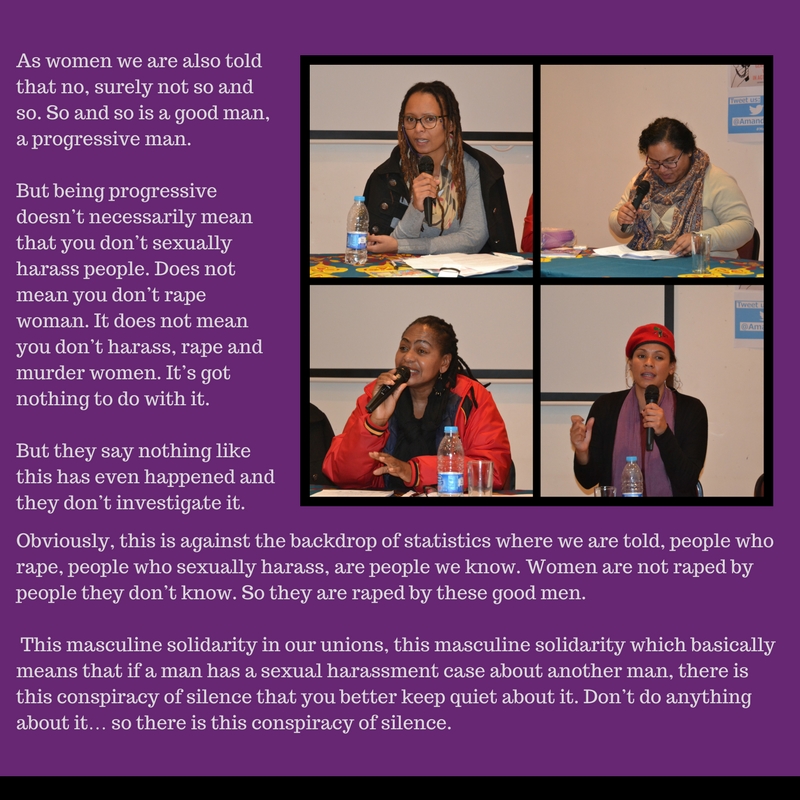 We frequently hear that during the liberation struggle, it was assumed women would subordinate their needs for gender-based justice to the nationalist struggle. Or as one famous photographer once told me when I asked him about the Black Consciousness Movement and gender: “Darling, it didn’t even occur to us to talk about those things.” For many, the plan was simple: once the state has been won and democracy achieved, all else would follow. Anything else was a diversion and division of energies. Today women are still told that they are trying to cause divisions within the party/union/movement when they report.

The second is far more insidious. It is something that Asanda Benya raised in her input. Men fiercely and violently protect their space, particularly if it is a male-dominated one. Speaking of harassment in the mining industry, Benya noted that for many women, harassment is a daily occurrence. It is something that has become normalised as part of being in a space where men stick together and the majority feeling is that mining has always been a male space and should remain as such. These spaces are policed on the basis of this patriarchal order, although seniority and job categories are also factors, and any attempts to change them often result in violence. 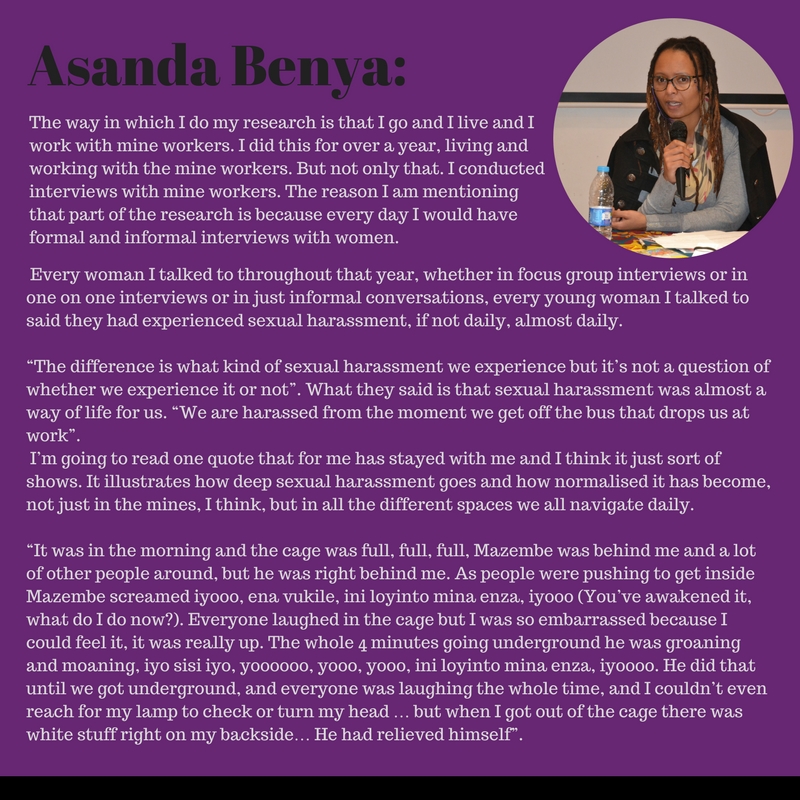 Organisational form and its discontents

Some people in the room during the discussion began raising questions about how we can handle questions of gender-based violence in a way that does not silence, obfuscate or cause harm. Is this possible through institutions like parliament or the party? This adds a third and important dimension. It is precisely these forms of organised and institutionalised politics that allow “comrade culture” to flourish. Congress (and by extension Alliance) politics is built on the foundational principle of “organisational unity”. This comes from, at least in its most democratic versions, consensus building.

In a union like Numsa for example, which prides itself on worker control, debates around any issue often entail persuading and pushing each region towards a position that all are satisfied with, in other words, finding a common denominator. In a male-dominated space like the union, or other highly organised forms of politics, a common denominator cannot hold around the issue of gender. As one person in the room put it, the problem of union politics is that they are boys’ clubs. So much of the bonding and “comrade culture” takes place around the sexualisation of women and the gendering of politics.

Often when women report sexual harassment, and I have witnessed this first hand, they are told that a man “is politically important to the project”. This implies that the principle of organisational unity is a zero sum game, where the suffering and rights of an individual woman cannot be allowed to harm the overall project of the organisation. When this hypocrisy is pointed out, there is usually swift and marked action taken against the defiant woman: she is alienated, she might find herself at the centre of smear campaigns. She is called divisive, and she may even be accused of taking a bourgeois position.

In many of these organisations gender remains about ticking boxes: in the case of Saftu, having one woman in the top six leadership structure; or in the case of the EFF, having 50/50 representation in parliament. Some may argue that the way things look is an important part of building inclusivity. I want to argue that the form of institutionalised politics produces its content. If we cannot rethink the form, then it doesn’t matter what content we keep adding or changing.

There are two important reasons that this is so. The first was also raised from the floor: women in these spaces often have to cast their lot with a male comrade in a powerful position in order to emerge in an election or as a leader. There are just one or two seats reserved for women in each local, regional or national body. So you have to be endorsed by a male. You have to choose a male as your political benefactor.

A Numsa shop-steward once told me: “men expect women to be weak and humble all the time. We must be more than human, if we want to compete for positions like they compete with each other for their positions. We are told we women are trying to destroy each other. We must wait for our turn.”

This was a powerful statement because it spoke to the clichéd understanding of how women should behave in politics. She went on to add, “and then some women and men think that because we are competing for positions and because we disagree on policy or some political issues we will not support each other when it comes to issues of harassment and assault. For me, that is a political position. I don’t have to like you to know you are suffering because you are a woman.”

Thus, on the one hand women are expected to be supportive, humble and non-combative by men who wish to maintain the status quo. On the other hand, in a bizarre imitation, there is also a disturbing idea amongst some women that “sisterhood” is about agreement and endorsement amongst friends, rather than a focus on raising the collective position of women in society through fighting patriarchal systems of power.

Yet this is often the case in organisations where men decide which woman will be the next to rise. It is often the one who has shown the most patronage and submission, “the good female comrade”. The need for agreement or the thirst for love and loyalty has led us up a blind alley of big man politics for too long.

Feminism is about politics, not lifestyle

This cult of personality expresses itself most strongly through authoritarian or populist figures. Yet it has found its way into some ‘feminist’ discourse where there is a surprising (and growing) overlap between patriarchy and the kinds of feminism that view “sisterhood” as personal friendship rather than political principle. It was precisely this brand of feminism that was bitterly expressed in some factions of the student movement at Rhodes University. Middle class feminists often formed cliques around feminist identity as a lifestyle politics of aesthetics, friendship and agreement. They were often averse to debate, dissent or disagreement and they took reactionary and anti-feminist stances because certain women and men were not part of their inner circles. This is becoming an increasingly dangerous feature of feminist politics in our country. 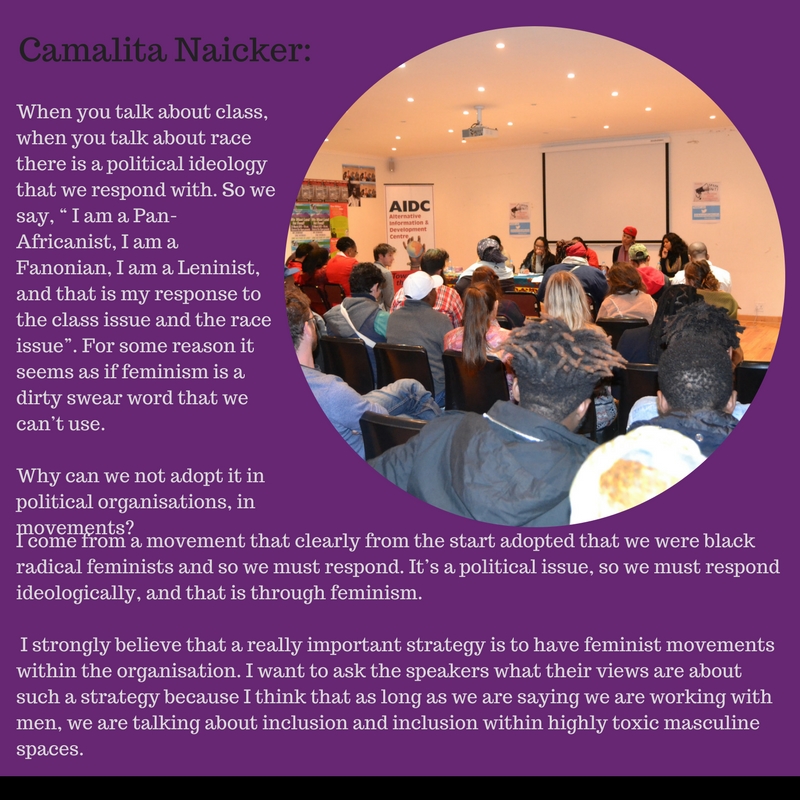 New articulations of the political?

Kim Pillay spoke about the difficulties of working within NGO structures. She told of one of the communities which had elections for a community structure. She was nervous that even though women had done most of the work in the community, they were going to once again elect men. To her relief, they voted 8 women and 5 men into the committee, to the dismay of the donor funders who asked whether they would not need more participation from men, who sought to overturn the decision!

In my more than five years of research with popular movements and organisations, mainly in shack settlements, this has been a common feature of popular forms of politics. Women are at the forefront of organising marches and protests, building community structures, food co-ops, healthcare, childcare etc. Yet when there are formalised structures, even in popular organisations, the leadership positions remain dominated by men. It does show however that in poor and working class communities, women are slowly starting to take up leadership positions.

However, this alone cannot be a solution. Although women who do the work should also direct the ways in which organisations work, the issue of gender should be championed as part of the political project itself, and not an additional or a separate structure. If we cannot redefine what it means to be a “progressive comrade” through decisive action, then we are not moving forward.  If a person is able to still be considered politically important whilst abusing women, there is much work to be done. While many people in the room were, rightly, opposed to more talkshops without action, I believe praxis requires both. We should, as one woman put it, “show up” more. But we should also re-think the form of politics available to us today and change the systemic way in which this silencing mechanism functions. 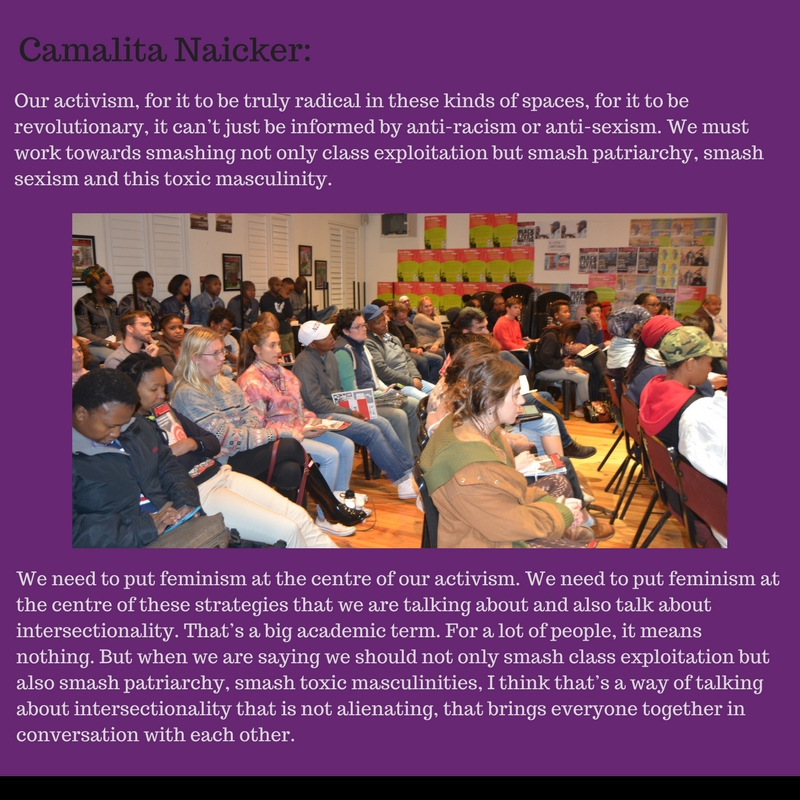 The full recording of this forum, with photos, can be found on the Amandla! Website