The people spoke – and their voice was deafening 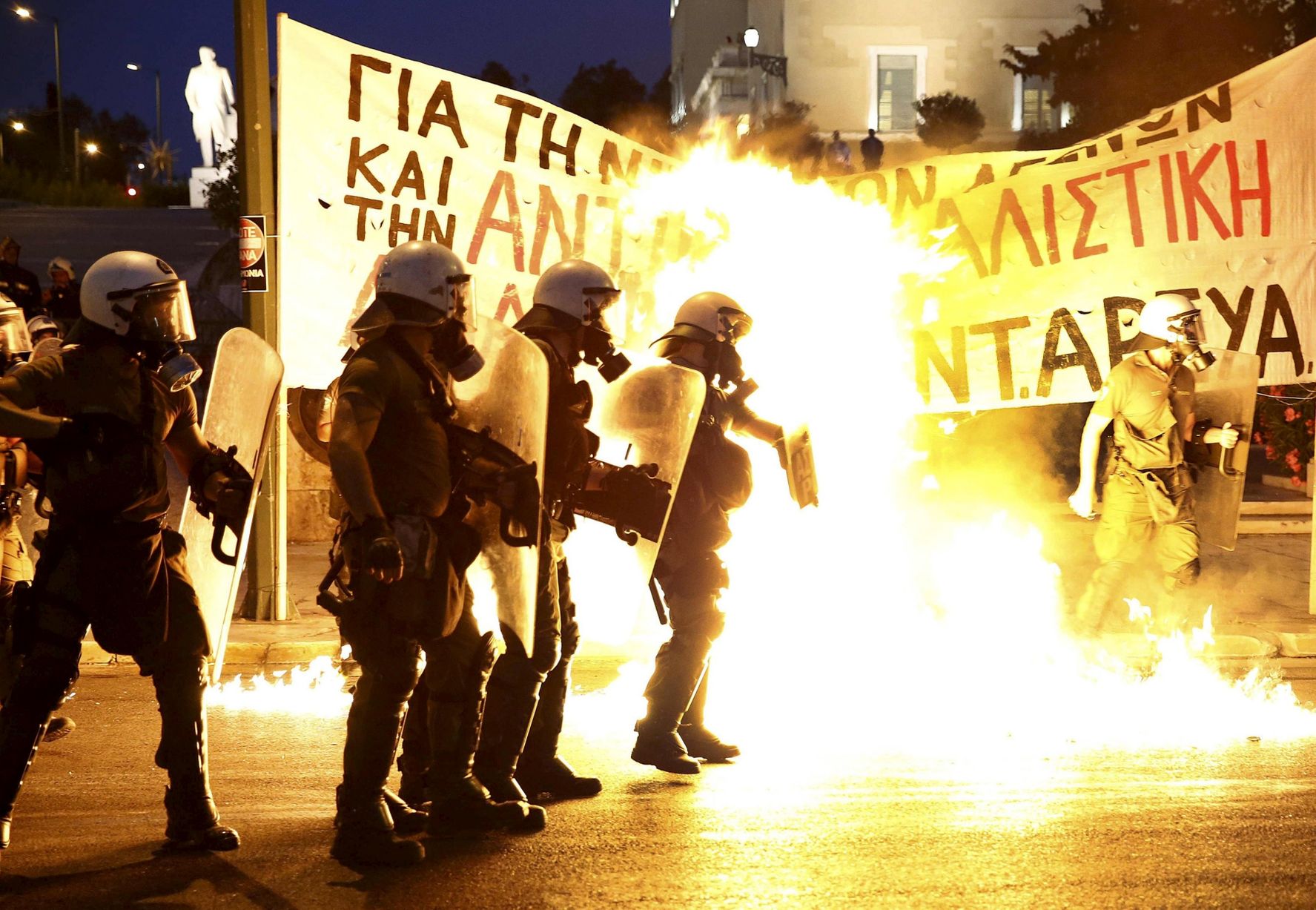 For: Amandla! by: Roger Silverman

It is now one year since the heroic struggle of the Greek working people to break the stranglehold of Europe’s financial oligarchy came to an abrupt and humiliating end.

But now yet again Greece finds itself in stark confrontation with Europe’s bankers. Not content with the intolerable cuts already inflicted on their long-suffering victims, they are insisting on immediate surrender of the full pound of flesh extorted at the blackmail negotiation session of July 2015. They are threatening to withhold even the parsimonious funding conceded there, until all fifteen of the draconic terms imposed there – including a humiliating wholesale privatisation package – have been enacted, complaining that only two of these have so far materialised. In reprisal, they are holding back the outstanding €75.4 billion still due of the total €86 billion that had been agreed by 2018. Only a pitiful €7.5 billion of this sum has actually so far been disbursed. The proportion of Greeks suffering extreme poverty has already risen from 2.2% of the population in 2009 to 15% – a total of 1.6 million people – last year.

Greece has been undergoing a nightmare that can best be described as the vivisection of an entire population: a laboratory experiment conducted on the living body of the Greek nation to test out how far it could withstand the trauma of ever more drastic surgical amputation.

Despite the malicious stereotypes conjured up by apologists for their oppressors, even before the onset of this crisis Greek workers already worked longer hours on average than those of any other country in Europe, or of any country in the world apart from South Korea. It is also an outright lie that the Greek debt crisis is the result of successive governments’ irresponsible profligacy in spending. As with the world financial crisis that began in 2008, Greece’s so-called “sovereign debt” was accumulated not through their pitifully sparse spending on welfare, pensions and benefits, but through the criminal transfer to the state budget of the ledger deficits of European bankers and corporate international creditors.

In the seven years since the crisis began, the economy has shrunk by more than a third. The poorest 20% of Greece’s 11 million people have suffered a 42% drop in disposable income since 2009. Greece’s rate of unemployment is the highest in Europe at 24%, with youth unemployment at 47%; yet even this figure leaves out of account the half a million Greeks forced to emigrate to seek employment abroad.

According to no less an authority than the IMF, the butcher of so many third-world economies in the past, in the absence of debt relief interest payments on the mounting debt will account for 60% of the annual budget by 2060. Currently standing at around €326 billion, equivalent to 176% of GDP, the accumulated Greek debt has already hung a burden around the neck of every man, woman and child in Greece of nearly €30,000. Yet every one of the three so-called “bailouts” that Greece has received in the last five years has come at the cost of still more harshly punitive attacks on the living standards of the poorest, including further savage cuts to pensions and increases in VAT and other taxes and duties. And with what effect? In the second quarter of this year, consumption had fallen by a further 6.4% and exports by 7.2%.

At the lowest levels of society, people are sitting in the dark, scavenging from dustbins, chopping firewood from the forests, even in some cases giving away their children to those better able to feed them. Nowhere in the world have the poor got poorer so catastrophically fast as in Greece. And nowhere have they stood up so boldly in defence of their rights.

From 2010 onwards, the Greek people had blazed a trail for the workers of Europe by defying the bankers in their millions: in countless general strikes (more than forty so far, and still counting); in occupations of the streets, squares and public spaces; and in the election to office in January 2015 of a new party pledged to fight austerity, support for which had soared from less than 4% five years earlier to 37%.

The mass occupation of the city squares was the most eloquent, striking, public manifestation conceivable of popular outrage; an assertion in the flesh of the common solidarity of the 99%, stretching across the entire mass of the oppressed and deprived population. And SYRIZA was a party which had sprung from their spontaneous mobilisation from riots to strikes to demonstrations to occupations to general strikes, all eventually converging in this political front for a broad spectrum of protest.

For six months the world watched spellbound while the SYRIZA government found itself beset by traps and manipulated into fatal concessions. 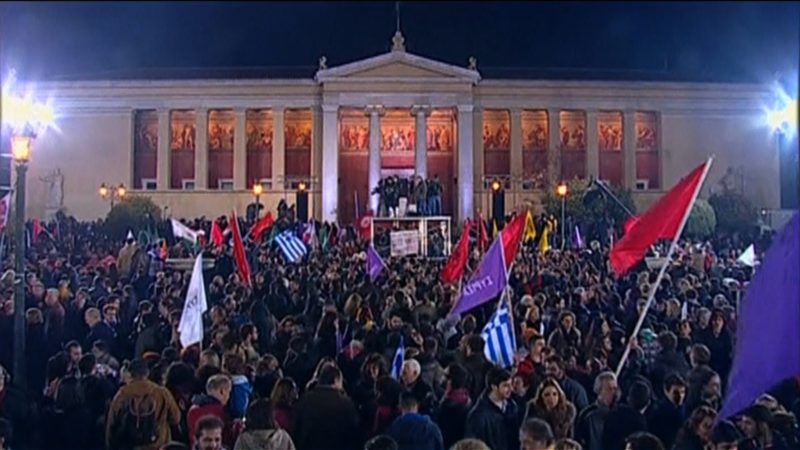 Towering over the negotiating table loomed the monstrous shadow of the real, tangible, incontrovertible power of the banks. Offered a rare opportunity to voice their will directly in the historic referendum of July 2015, the people spoke – and their voice was deafening. By a margin of almost two to one, the Greek people cried NO! SYRIZA was confronted with a stark choice: between defiance and martyrdom on the one hand, or humiliation and capitulation on the other. Having flirted with the first option… it then shamefully scuttled into the second. Perhaps, like the Duke of Wellington when he had reviewed his troops on parade, Prime Minister Tsipras had concluded: “I don’t know what effect these men will have upon the enemy, but, by God, they frighten me.”

If proof were needed of the demonstrators’ awareness of the international character of the movement against austerity, it is necessary to look no further than the banners they were flying in the occupied squares in 2010, written not just in Greek but in English, Spanish, French, Italian and German, appealing for a continental-wide war against the bankers and their capitalist system. They were consciously and explicitly rallying the working people of Europe to join together with them in a continental-wide uprising.

The Greeks’ misfortune is that they launched their struggle a little ahead of the rest of us and found themselves facing the enemy alone. We can learn alike from their achievements and their failures. In the history books of the future, the latest Greek uprising will be seen as a mere preliminary skirmish. Far bigger battles lie ahead. Spain’s debt now amounts to more than a trillion euros, Italy’s more than two trillion. All Europe is a ticking time-bomb.

The people of Greece have rocked the continent. Let Europe’s ruling kleptocracy remember the Greeks’ centuries of guerrilla struggle against Ottoman rule; their rout of Mussolini’s armies in 1940; their resistance army of partisans who single-handedly overthrew the Nazi occupation regime; their years of civil war against first the British and then the American military. Let them not forget how it took a single uprising of the Greek youth against a brutal military dictatorship to send the colonels packing. They may have lost the latest engagement, but the last word has yet to be spoken.