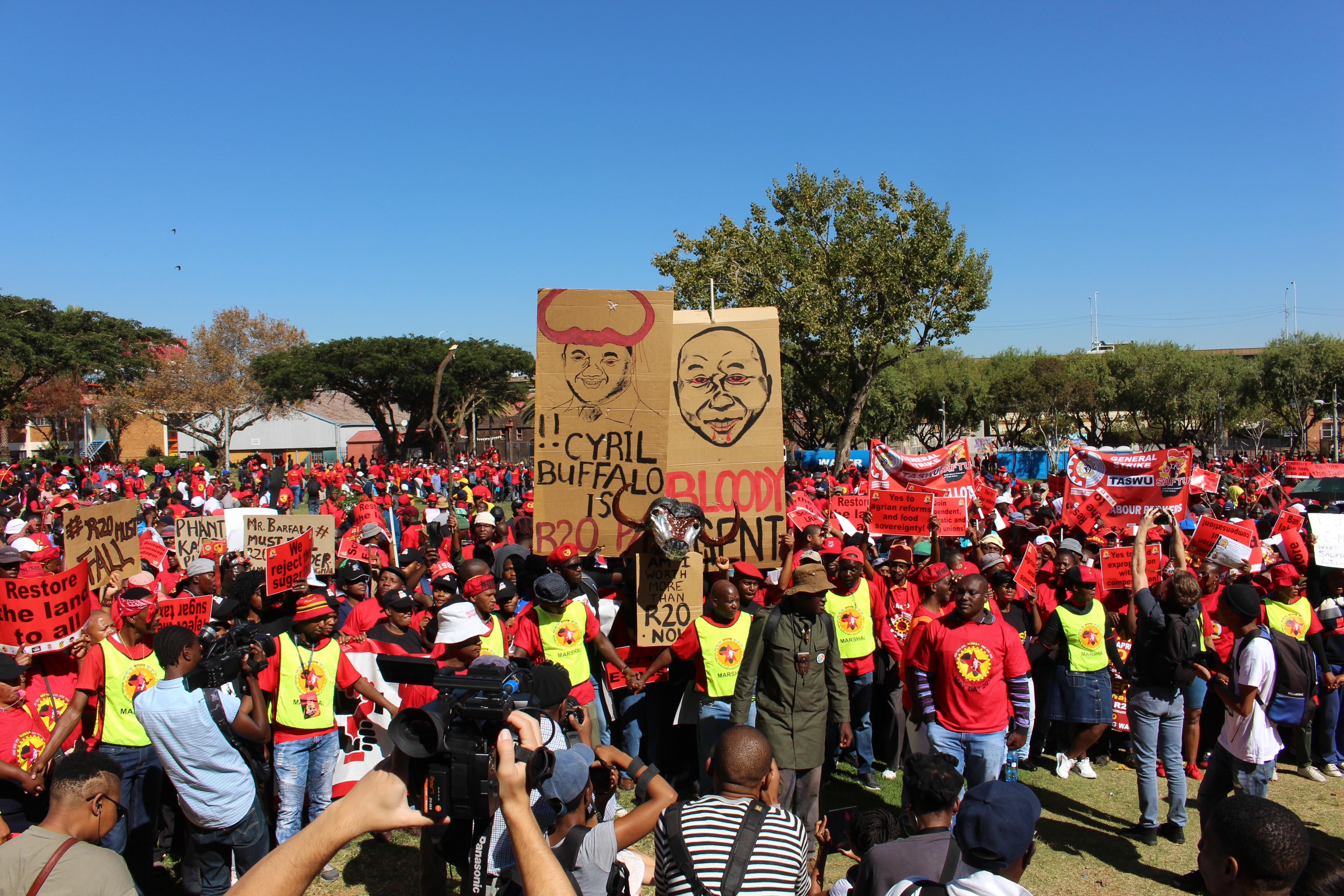 On 25th April, Saftu called a general strike and organised marches around the country to protest against the changes to South Africa’s labour laws currently before parliament. These actions were in response to a government attack on workers’ rights that has been described as the most vicious since the end of apartheid. They took place in the context of a trade union movement showing signs of collapse, fragmentation and loss of its purpose as champion of the working class. Cosatu, Fedusa and Nactu in fact support the government’s attack on the workers.

• Will the new federation and its allies among civil society and community-based organisations in the #ScrapNewLabourLaws campaign be able to stop this attack by the ANC government?
• Does Saftu represent the possibility to reverse the organisational, political and moral collapse of the trade union movement symbolised by the shameful sell-out of workers by Cosatu, Fedusa and Nactu around the labour bills?

The focus of this article is on the second question.

The nature of the trade union collapse

The numbers tell part of the story. As expected, union density (the percentage of the total workforce who are union members) increased from 20.7% to 46% between 1980 and 1990. This was the formative decade of Cosatu and Nactu. By 2012 density had declined to 29.1%.

The drama of this decline becomes clearer if we isolate the manufacturing and community and social services sectors. The 1980s boom was driven by an explosion of union membership in manufacturing. Density in manufacturing increased from 41.72% in 1980 to 70.16% in 1990. But by 2012, it had collapsed to 31.2%. The impact of this collapse was masked by an increase in density in the community and social services sector (mainly public sector workers). This rose from 9.65% in 1980 to 54.9% in 2012.

These dramatic changes in union density were driven by the way unions responded to neoliberal tactics such as outsourcing, labour broking and sub-contracting. This response changed the conditions and social composition of the working class. In manufacturing and other sectors, outsourcing and labour broking have created a layer of workers that is increasingly important to the production process, but is marginalised in terms of wages, benefits, job security, belonging and access to organisational rights. The exact scale of outsourcing, labour broking and sub-contracting is not known, but Haroon Bhorat and others have estimated the creation of 1.3 million new jobs by labour brokers between 1995 and 2014.

The response of the trade unions to the neoliberal restructuring of the labour market was a mix of resistance and cooperation. But there could be no doubt that cooperation was the dominant element within this mix. Cosatu in particular had strikes against privatisation and a campaign to ban labour broking. But at the same time it was doing its best to keep the ANC in power. And it was the ANC that was responsible for the neoliberal assault on the working class.

The key element of cooperation though was something that applied to all the mainstream unions. The wages and benefits of externalised workers depend not on their direct employers, but on the clients of their employers. When these workers demand a higher wage, they are simply told by their employer that they only get so much money from their clients, and if they ask the client for more they would lose the commercial contract.

As a result, the unions became organisations of permanent, urban, mostly male, South African workers who are better paid and more job-secure than average. In 2012, 93% of Cosatu members were permanent workers. For unions generally the average was 95%.

More than this, the women, immigrant, rural, precarious and externalised workers did not just stay out of the unions. They developed antagonistic attitudes towards them. In our experience at the Casual Workers Advice Office (CWAO), these workers see unions as structures taking their money and not doing anything for them. In many cases, unions are seen as actively siding with the bosses against precarious workers. 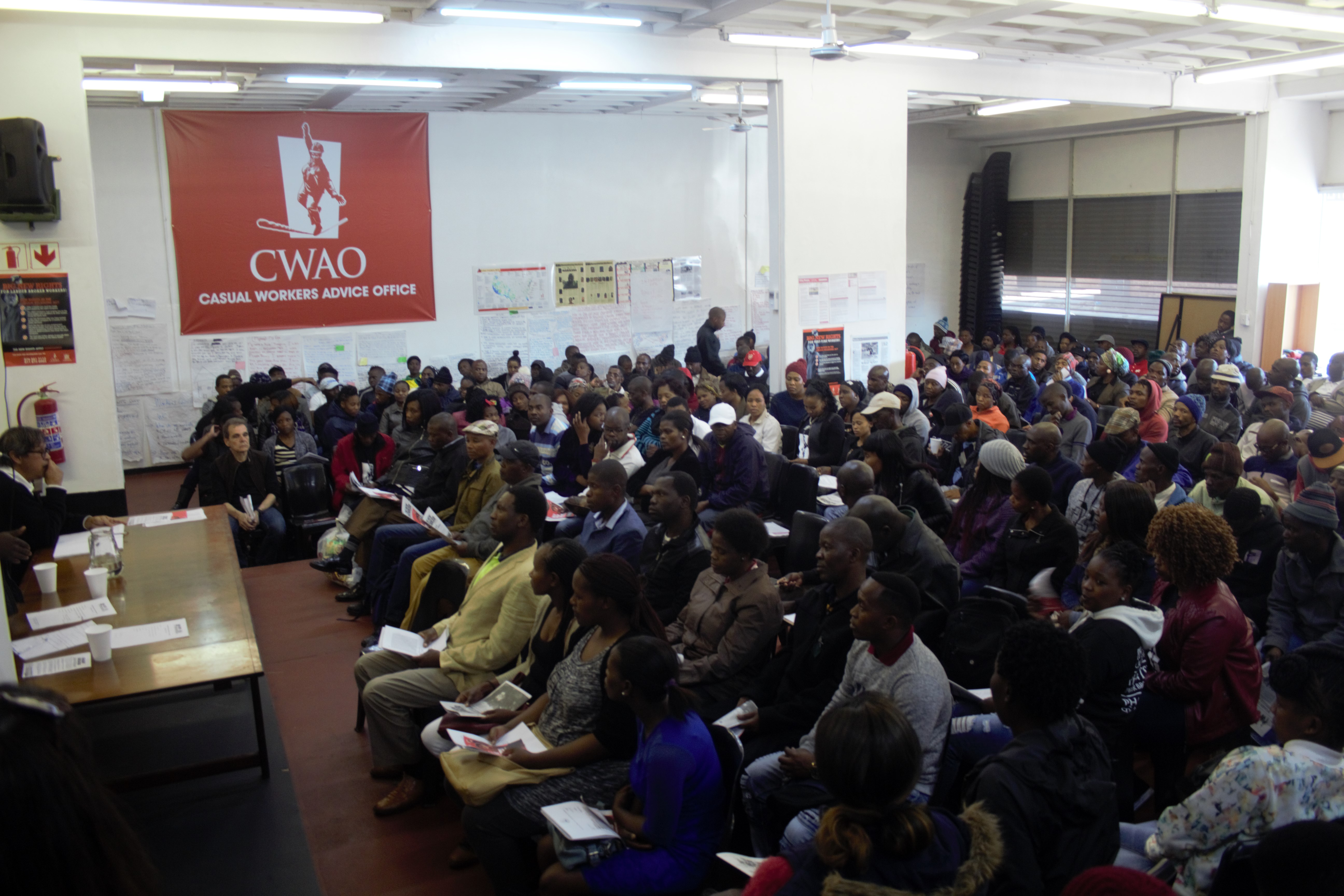 Unions as instruments of elites

The unions have chosen to position themselves as co-implementers of the neoliberal labour market. So it is logical that they would side against precarious workers. In addition, unions have increasingly become instruments of elites, as seen in political careerism, bureaucracy, corruption and union investment companies. The divides around the labour bills can be seen as the culmination of this development. In its essence, these labour bills amount to an attempt to deepen and strengthen two things:

• the marginalisation of precarious workers from labour market governance institutions
• the insider status of the unions currently in Nedlac, the bargaining councils and the CCMA.

Can Saftu turn around the collapse?

It is not clear exactly how many workers took part in the April 25 strike, but media reports suggested that it was mainly manufacturing that was affected. In Johannesburg, the organising task team estimated that 10,000 to 12,000 workers took part in the march. The next biggest march was in Cape Town with an estimated 1,000 participants. There were smaller marches in Port Elizabeth, Durban, East London, Bloemfontein, Polokwane and Robertson. Based on this, it would be fair to say that a maximum of 20,000 people took part in the marches around the country. Saftu claims 700,000 members. Numsa in its two Johannesburg Regions alone has 100,000.

These numbers reflect and confirm the collapse of the trade union movement. They do not suggest a turnaround. And they show the strength of Numsa and Fawu. In 2000, Cosatu, which was already in decline, organised marches for job creation around the country. The federation claimed about 2 million members at the time, but said it was able to mobilise more than 4 million people in these marches. The excitement around the fact that Saftu could mobilise about 4% of its claimed membership is perhaps the clearest sign of the collapse of the trade union movement.

At its founding, Saftu was clear that its progress should be measured against its success in organising the 74% of workers who were not members of the trade unions. At its first NEC meeting it resolved to launch a massive effort to mobilise labour brokered and other precarious workers. Against these measurements the strike and marches of 25th April represent little or no progress. Even if these actions were effective as resistance to the labour bills, they represent the resistance of the remaining cadres of a collapsed trade union movement, not its revitalisation among new sections of workers.

CWAO is located on the East Rand, the heart of the manufacturing sector. It gets a steady stream of labour-brokered workers aggrieved that these unions are either ignoring them or actively supporting the employers.

This orientation plays out in how Saftu approaches the labour bills. While it has come out against them strongly, it has steadily drifted towards a demand that the bills should be sent back to Nedlac and that Saftu should be allowed into Nedlac. Precarious workers are of course not represented in Nedlac, which is one of the institutions underpinning the neoliberal labour market. In other words, Saftu is orientating to enter deeper into a system that is becoming more exclusionary and hostile towards precarious workers.

The unions in Saftu can play a positive role in the revival of the workers’ movement. But to do this they must be willing and able to unite with the struggles of precarious workers and break with the institutions underpinning the neoliberal structure of the labour market. This would entail orientating away from Nedlac and giving up the supposed benefits of being registered with the Department of Labour. Saftu is not on this path.