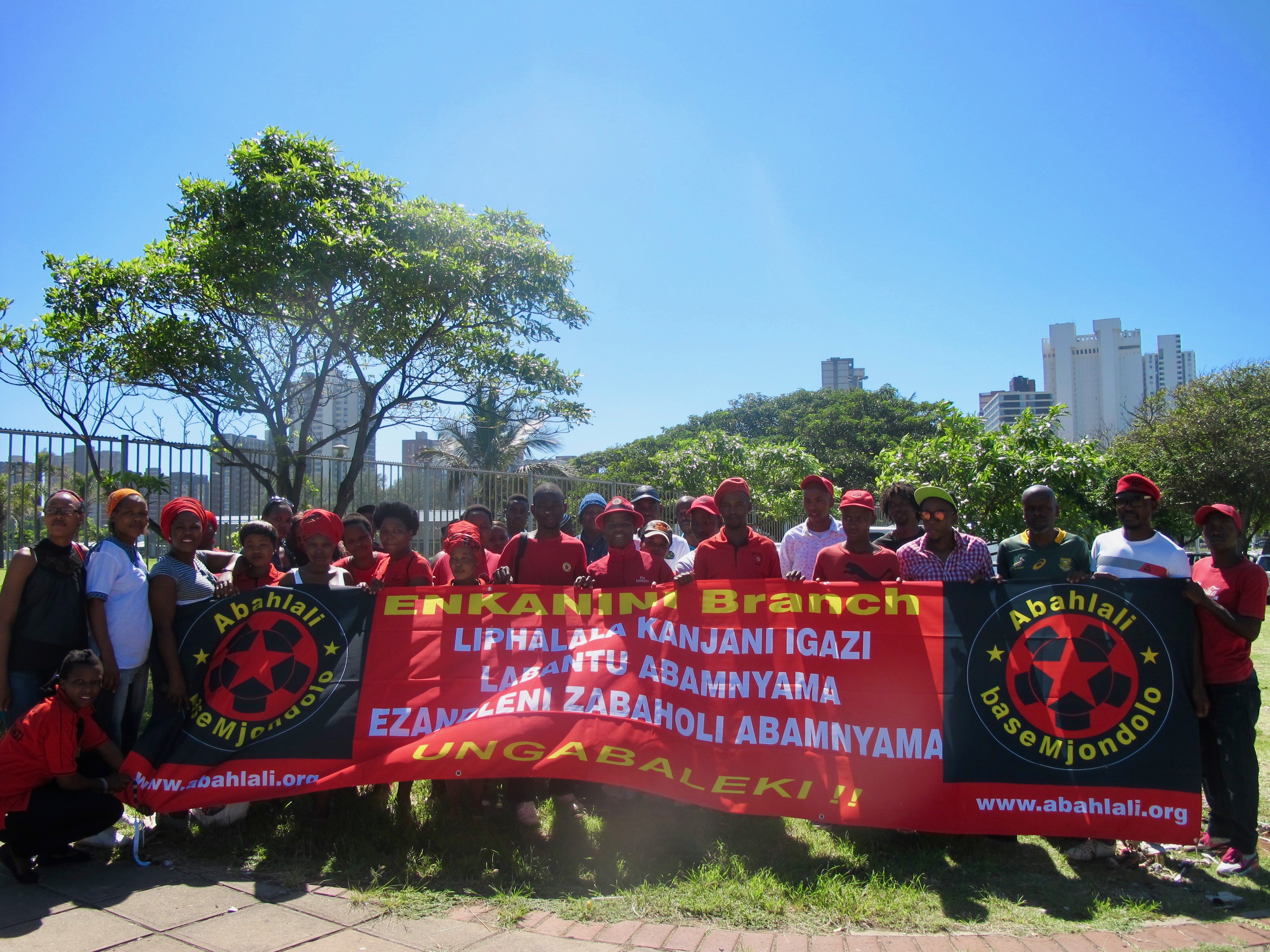 A mix of activists sat in two circles – one for listeners, one for comrades raising questions – on the final day of a political school hosted by the social organization Housing Assembly, in Cape Town in late March. The days leading up had been full of discussion around frameworks and organizing strategies, but the coming hours would be spent debating responses to the bigger questions that, inevitably, did not and could not have one answer. When we are saying we want land, what do we want? Who owns land- and why is land being owned? Who’s going to take the land from who?

In South Africa, the unresolved issue of land access and ownership, deep ties and the seizure of homes, is a looming legacy of the Apartheid government. But now, the African National Congress (ANC) party’s proposal to expropriate land without compensation adds another layer of positioning, especially for social movements calling for decent housing and land. The issue of land is particular to South Africa, but is also a distillation of quiet ghosts living in broad daylight across the country, those engines of imbalanced economic control, marginalization from birth places, of colonialism. Land is everything.

The proposal to amend the Constitution came about during the ANC’s conference in December 2017. Under the terms that an ad hoc committee would be formed to review and approve changes, section 25 of the Constitution was to be adjusted to allow for land expropriation, without compensation, in the public interest. A mix of opinions swirled in the aftermath of the declaration, which left room for doubt in the ANC moving ahead with land expropriation in real time.

The Constitutional Review Committee is collecting feedback through an open comment period which ends on June 15, and holding public hearings in each province before moving ahead with the proposed amendment. For a number of social movements, the proposal was a call for solidarity and collective action. Many see the proposal as a continuance of the same oppression and exclusion of the poor and landless, rather than a turn towards inclusive change.

Abahlali baseMjondolo, a democratic movement of shack dwellers and other marginalized and impoverished people in South Africa, formed in 2005 to campaign for land expropriation from the bottom up. The group’s first legal mobilization around the Kennedy Road Settlement in the city of Durban dealt with the very concept of expropriation, when land slated for RDP housing use was sold to a local businessman. Many such land occupations have emerged across the city in the time since. Today, Abahlali has 50,000 audited members.

According to Abahlali President S’bu Zikode, land reform must come from below, from democratically organized people with land use decision-making power. In response to the government’s proposed reform, Abahlali found that land is generally spoken of in the context of mining, farming, agriculture, development, or is described as a commodity, but it is never referred to in the context of housing or urban spaces.

“The ANC’s new talk about ‘expropriation of land without compensation’ is a new voting campaign for the ruling party that aims at attracting black majority voters,” Zikode wrote in a statement. “But when they talk of expropriation as taking land from white farmers we know that land will go to black elites. We know that at the same time impoverished black people will be violently driven off urban land occupations in unlawful and brutal evictions.”

“We are determined to rise above the politics of expropriation of land without compensation to benefit few black elites, while the black majority remain in deep poverty. The occupation of vacant and unused land has worked for us and will continue to work as long as the government has no proper planning for our rural communities and for us in poor urban settlements,” he added.

April 27 is Freedom Day in South Africa- a public holiday and commemoration of the first post-apartheid elections held in 1994. Since 2015, Abahlali has drawn attention to the basic rights denied to poor, marginalized, and impoverished South Africans by hosting an annual event on April 22, called Unfreedom Day. Thousands of comrades, within and outside of the movement, traveled to Durban for the event. As long as the landless are excluded from central decision making processes, we are not free, they say.

Speaking into a mic, which moved between comrades at the political school, Faeza Meyer of Housing Assembly stated that land expropriation appears to be an intentional appeal to what people want to hear; “CR [President Cyril Ramaphosa] knows that we want to hear about the land, we’ve been waiting years and been promised and promised and promised. Neoliberalism and capitalism are eating away at us in our communities,” Meyer said. “He feels the need to do something, but the first thing he does as president is raising prices of things. This government is just trying to control us and make us calm. We cannot be fooled by our new president. It’s not just a one way discussion. It’s land, and housing, and our need, not for profit.”

After a two day Land Summit on May 19-20, the ANC stated that it will speed up its creation of new land reform laws and that a constitutional amendment is not necessary. It promises that the expropriation will not be “reckless” and in accommodating the private sector, the ANC hopes to “make the transition less painful,” in the words of the party’s Enoch Godongwana. Improving the transition, but for whom? Here, the ANC gives attention to the private sector, but fails to mention any effort to discuss land expropriation processes with those who have been denied rights to land, or who have lived on empty promises of RDP housing.  According to government estimates, the housing backlog is 2.1 million.

On March 21, thousands of advocates and supporters marched through the Cape Town CBD to stand before the Civic Centre, demanding that the government both release a plan for inner city affordable housing within 21 days and allow for the development of underused public land for affordable and social housing. A mayoral committee member signed off on the memorandum of demands at the march’s conclusion, though land activists and evictees have been promised change with no action before. And yet, a couple of participants felt that this was the beginning of something, that the march was more energetic, equipped with more momentum and people power than any demonstrations in recent years.

Reclaim the City, a Cape Town-based movement for affordable housing and desegregation, currently supports two occupations: the Cissie Gool Hospital in Woodstock and the Helen Bowden Nurses Home in Sea Point. Since these occupations began in 2017, Reclaim the City has built out a weekly Advice Assembly to engage people both within and outside the movement on evictions, knowing one’s rights, and legal proceedings. Each Tuesday, the movement welcomes people living in occupation or otherwise to attend its assemblies in CGH, where people share their experiences and learn from one another. As per the notion of occupation, Reclaim the City brings people from a wide range of backgrounds together, all of whom have suffered from eviction and displacement. In thinking about the housing crisis in Cape Town, Reclaim the City occupant and trade unionist Bevil Lucas said that community conversation is crucial in identifying steps forward. “The more things we do together, the easier it will become,” Lucas said. “If you were to create a dialogue around this question in Cape Town, what form should this discussion take in civil society? Not to reach a consensus but to participate in a dialogue.”

Community engagement has formed in different mediums and spaces since debate on land expropriation took off in early 2018, but the history and national implications of the proposal have brought the issue to the forefront. The people implicated by the housing crisis are living out and shaping all action around improving housing conditions for themselves, because the government has proven that they are not attentive. People are holding meetings, offering advice to one another when evictions notices appear. They are showing up in court. They are organizing marches and solidarity meetings, political schools and mobilizations. They are wearing black bands on their arms, carrying signs, in honor of a fallen comrade: “Rest in Power RASTA.” They are dancing out their collective grief and offering final condolences to a chair person, S’fiso Ngcobo, killed by eviction officers, May 22, 2018. They are moving forward with the struggle, because there is no other way.

The sudden legislative attention given to the land question should not be mistaken for recognition. Rather, the proposal exposes the lack of space provided, time and time again, to rural and urban poor, who have been suffering and fighting for and occupying land their whole lives. And yet, the national stage on which the land expropriation proposal is fully lit, different depending on where you’re sitting in the audience, creates an opportunity to more publicly and collectively discuss future possibilities.

Referring to the most recent monthly General Assembly in Durban, a Abahlali Facebook post reads: “Despite all the challenges we have been facing, evictions, being neglected by the government, death threats and even losing our comrades in the struggle, Abahlali in Newcity branch said that they will never give up. As part of strengthening their struggle and the leadership, today we have launched Men’s, Women’s and Youth League in the Branch. Struggle continues !!!!!”

As the political school’s question and answer session came to a close, the chair person of Abahlali Cato Crest, Kalesan Dhaboran, took the mic. He spoke deliberately, offering a final word after many people had spoken; “I want to wake up one day and see when there is a fire in Khayelitsha, there must be a fire in Limpopo, in KZN, in one voice, with one agenda, asking the same questions, asking for one thing,” he said. “We are headed in the right direction.”

The following series of photos captures some of the individuals, places, and daily lives of social movements for housing and land across South Africa. The written essay above seeks to lay out some of their perspectives, but these photos provide further context about the fabric and feel of organizing around the land issue at this moment in time. The images were taken over a period of about two months between mid February and mid April, and feature members of the groups Abahlali baseMjondolo in Durban, Housing Assembly in Cape Town, Reclaim the City in Cape Town, and some participants in marches. As land expropriation is being debated, discussion within these groups points toward the proposal being a repetition of an old, familiar story of continued exclusion. The photos here of individuals engaged in meetings, political schools, memorial services, within occupations, and in marches,  feature the experiences of people who are landless themselves. There is not one narrative or position that emerges, perhaps, but rather a range of stories that provide a glimpse at the daily struggle for land and housing. 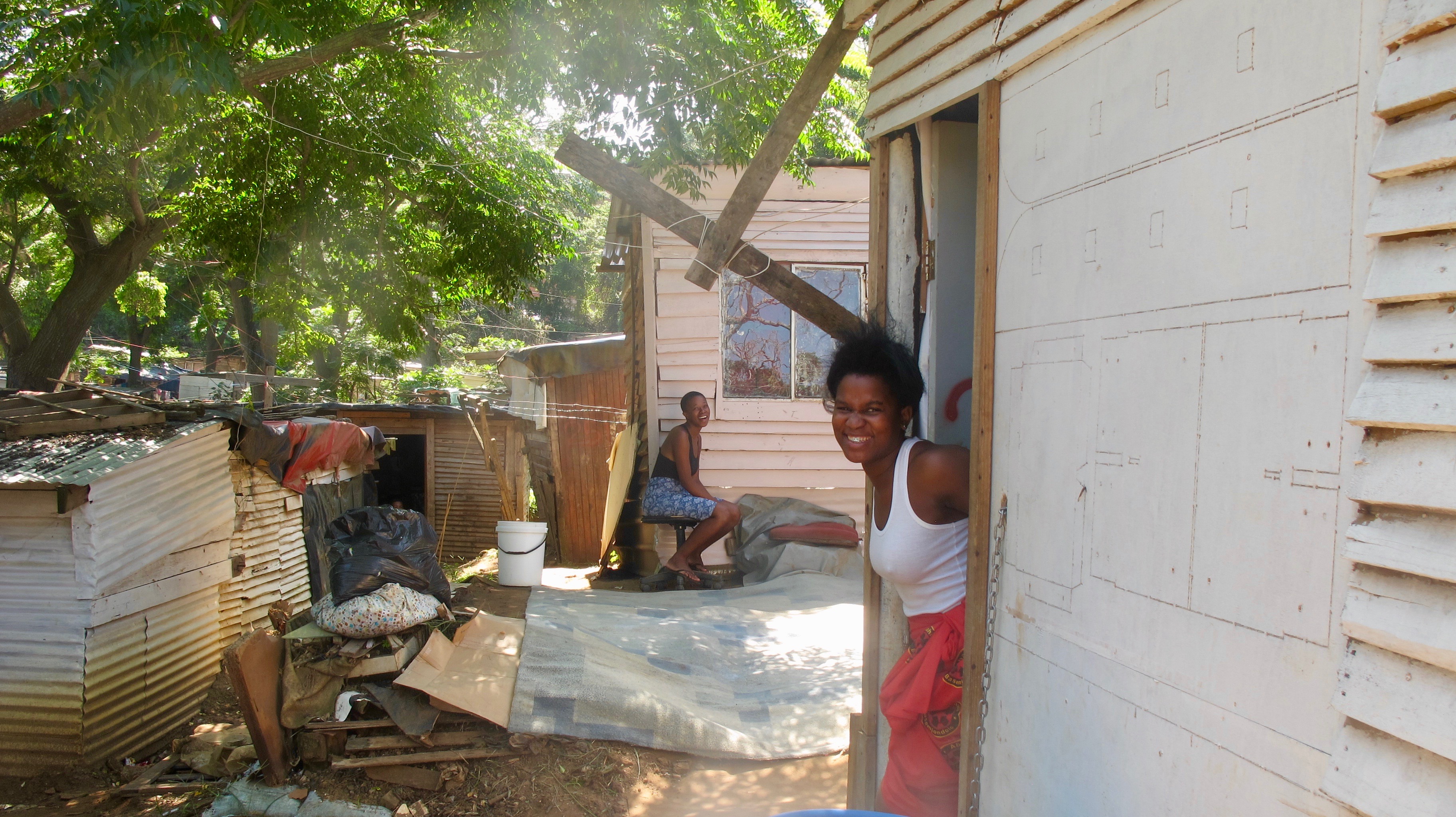 Residents of the Cato Crest informal settlement pose near their residences, mid-morning. 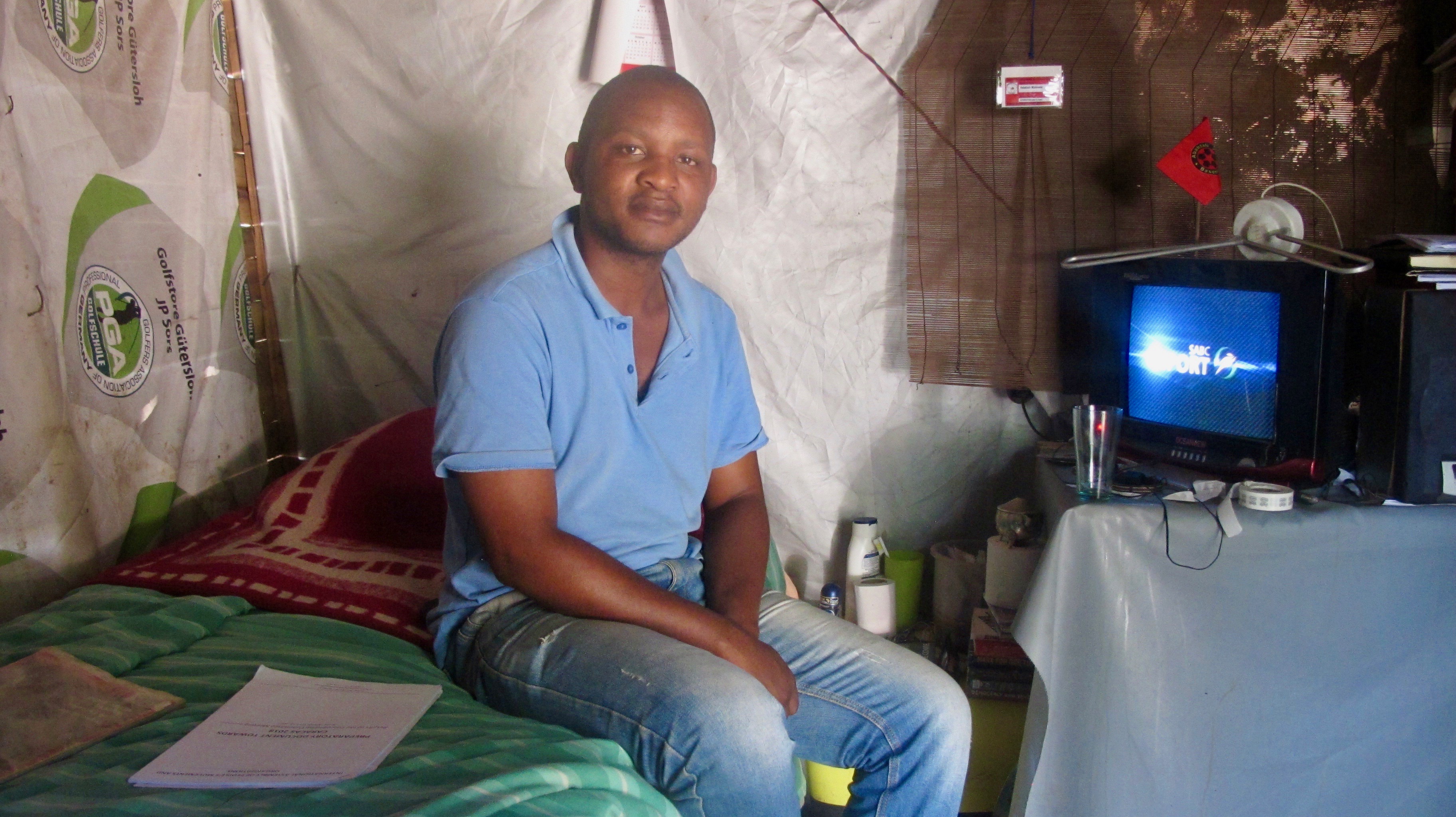 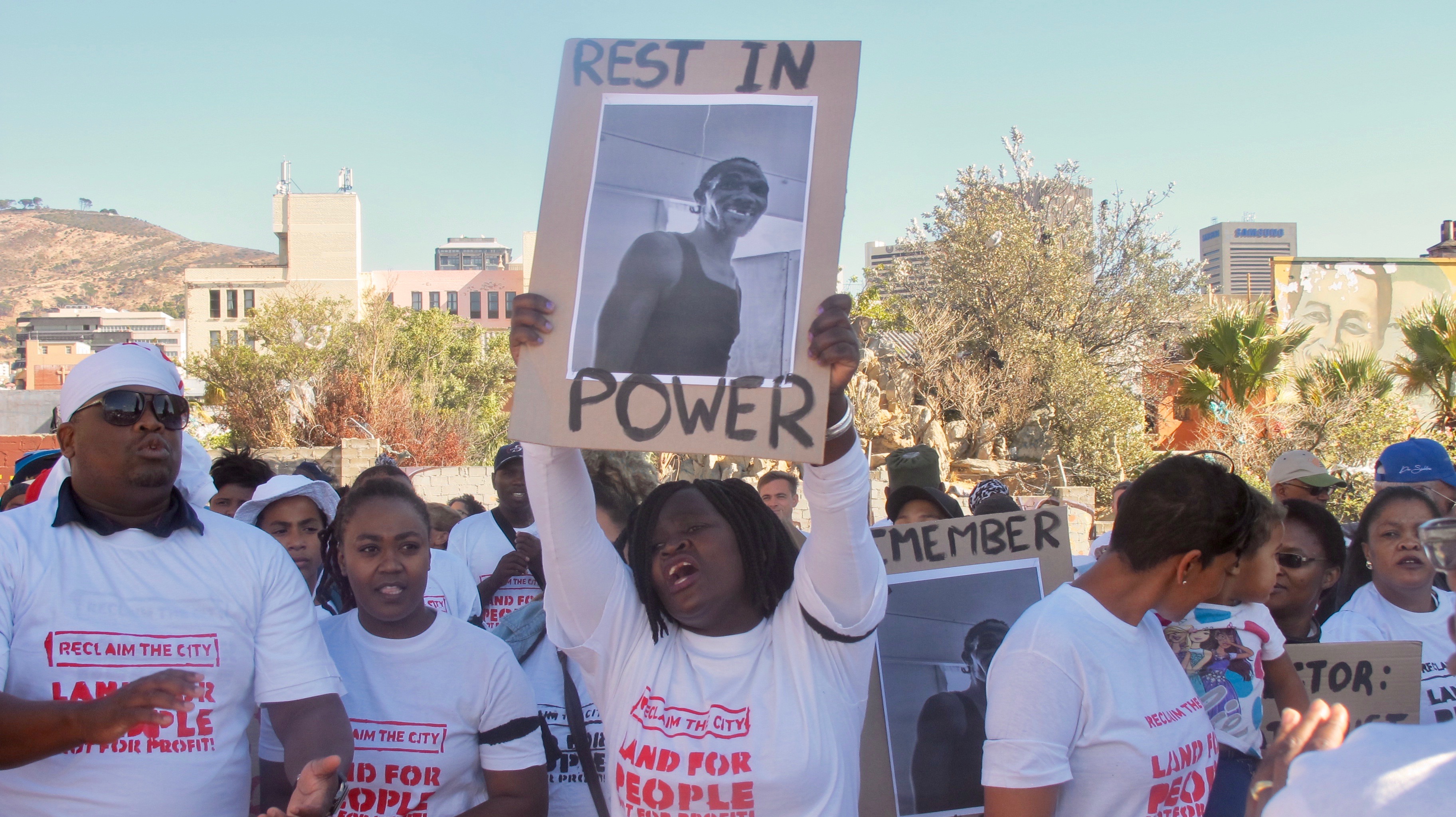 Participants in the #LandForLiving march honor the life of Zamuxolo Dolophini, “Rasta,” by carrying signs and wearing black bands around their arms. Rasta, a member of Reclaim the City, was stabbed to death by security guards outside the Helen Bowdens Nursing Home in Cape Town on March 18, 2018. Children pose with signs they carried during a #LandForLiving march through the Cape Town CBD on March 22, 2018. 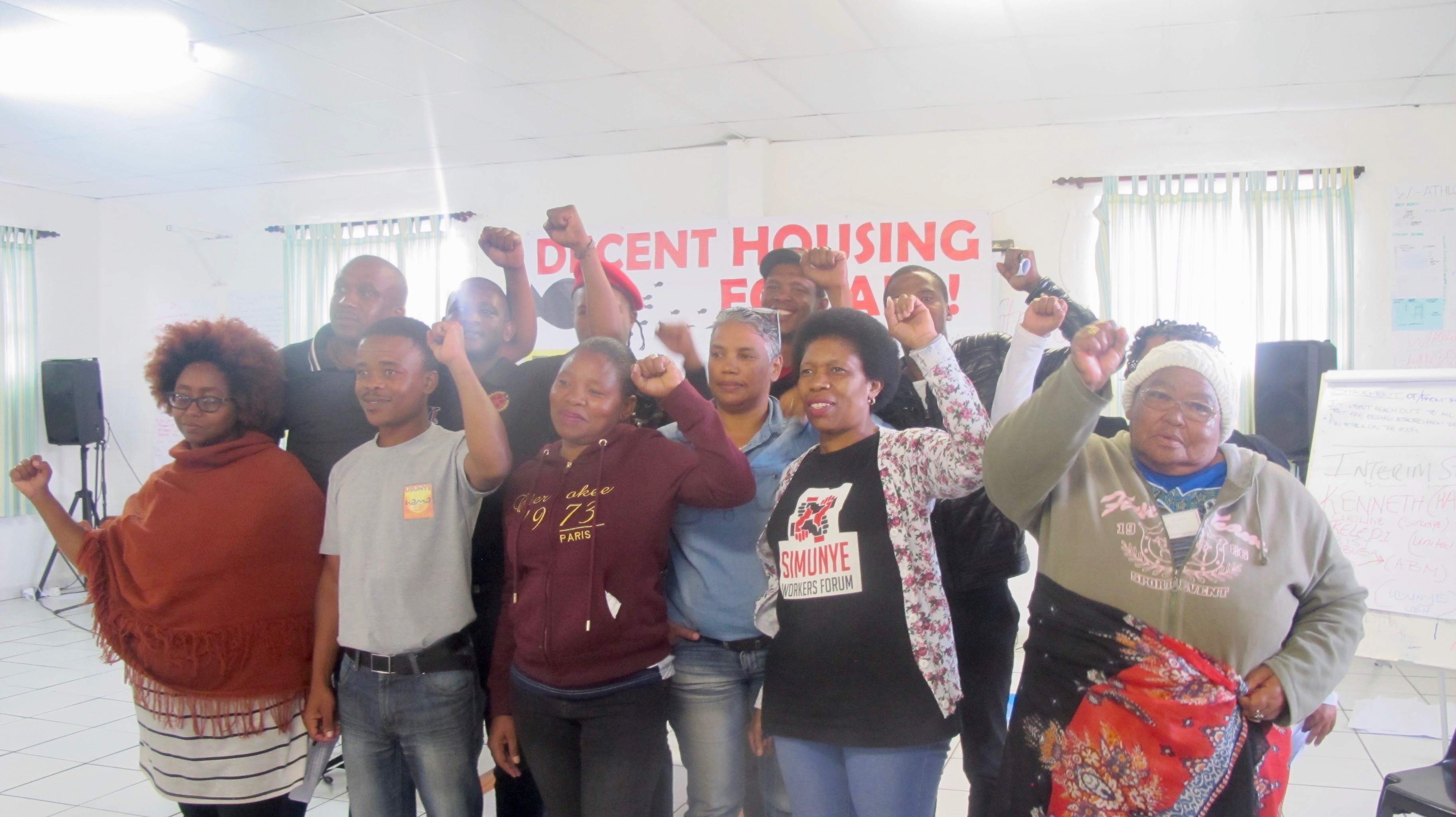 Comrades at a political school hosted by organization Housing Assembly in Cape Town in March 2018 stand together as a mark of their promise to form an alliance between social movements across South Africa. 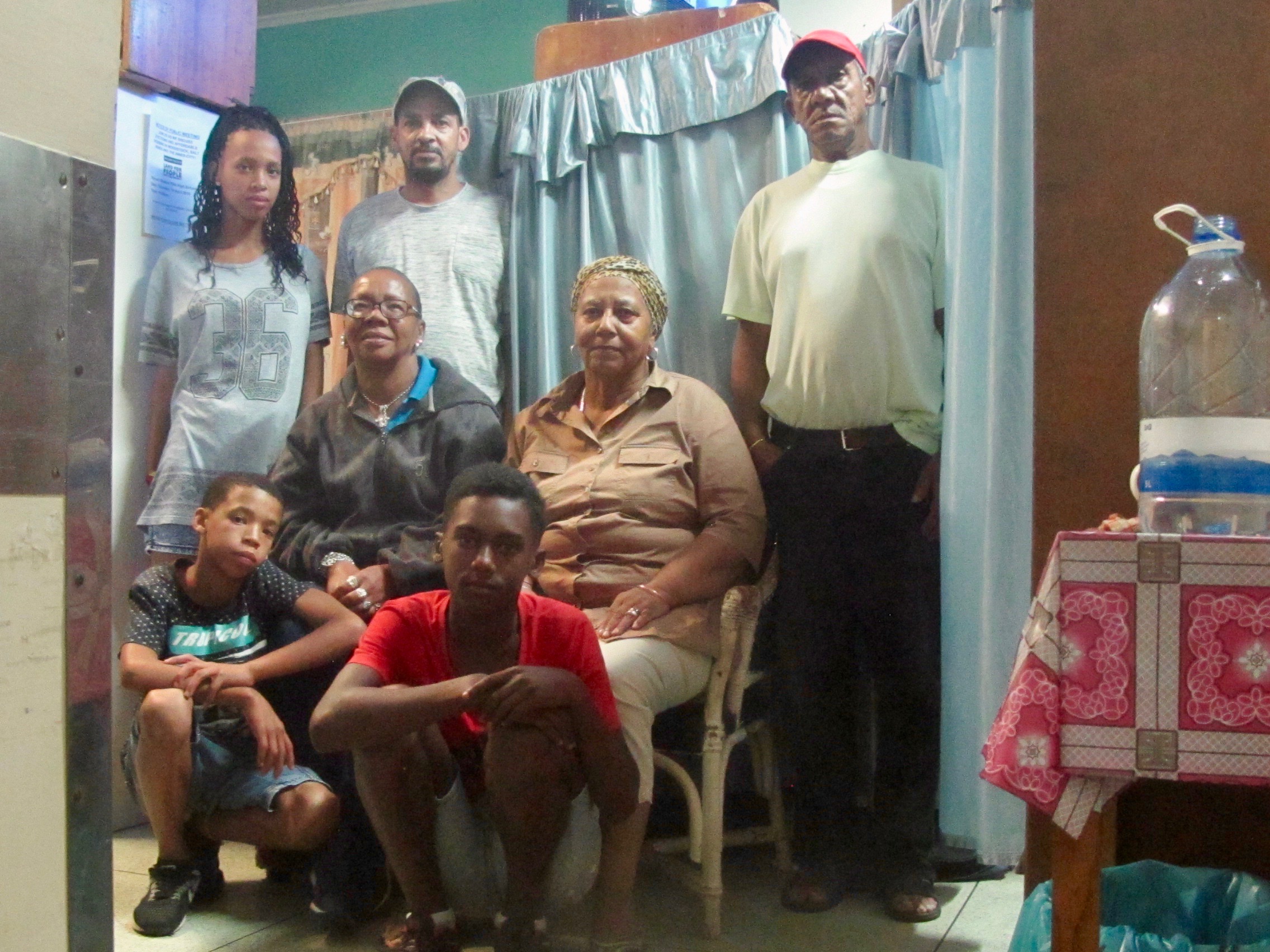 A three-generation family living in the Reclaim the City occupation of Cissie Gool Hospital in Woodstock, Cape Town, poses in their room. They moved into the occupation in March 2018 after being evicted in Woodstock.

Julia Thomas is a freelance American journalist who received the Thomas J. Watson Fellowship 2017-18 to explore the intersections of storytelling, citizenship and journalism across the globe.