Corruption – a network of profiteers

Corruption – a network of profiteers 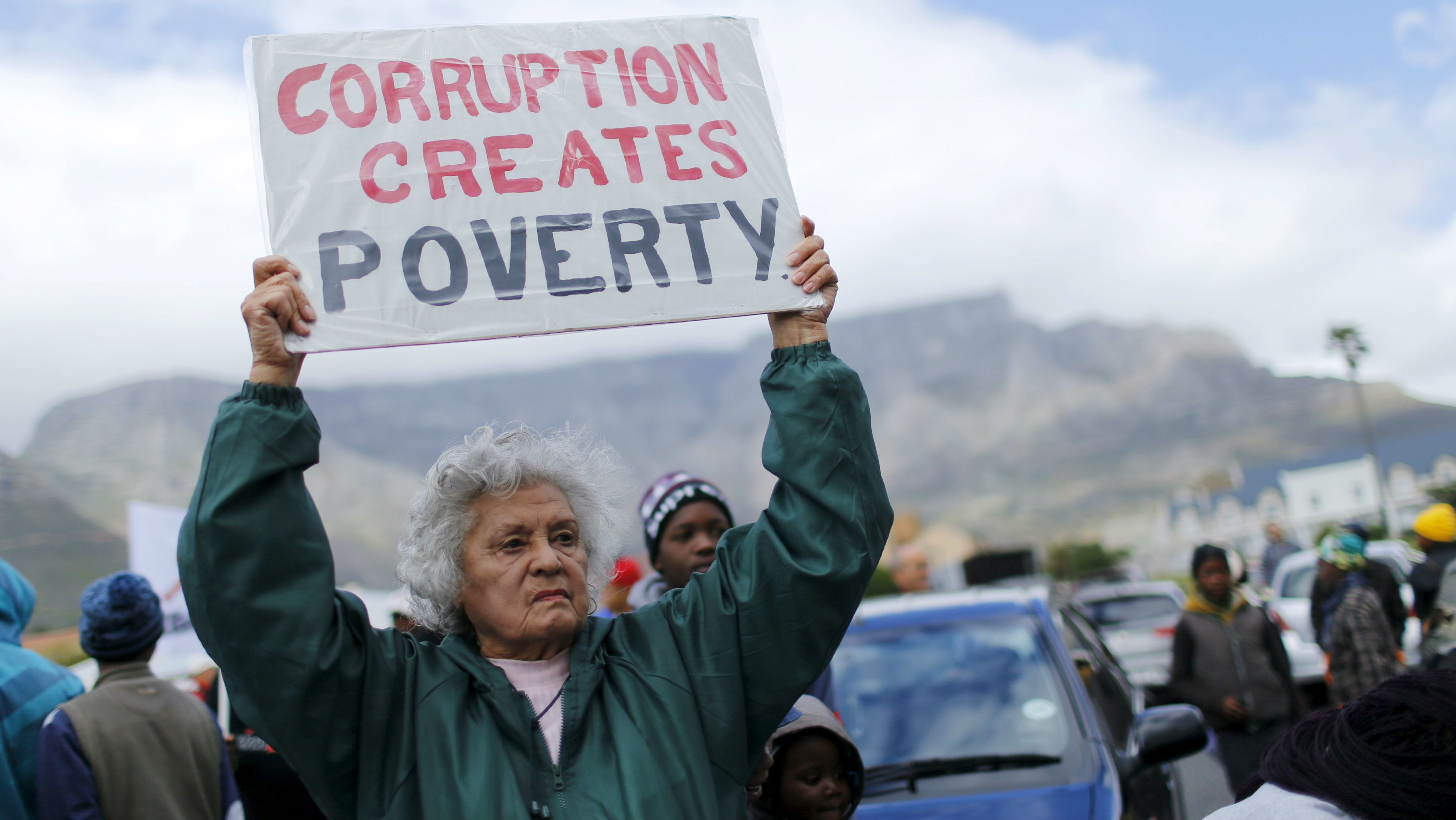 A demonstrator carries a placard as she marches to protest against corruption in Cape Town Photo: Reuters

‘Pay back the money!’ These four words have come to be the rallying cry for executive accountability in South Africa. President Jacob Zuma bears a heavy responsibility for the obscene use of public funds at his private residence. However, the focus on Zuma alone misses a far larger question: why has corruption become entrenched in public life and political contestation for power? Focusing on an individual reinforces the impression that his removal from public office would clean the corruption slate.

Equally problematic is the argument that Public Protector Thuli Madonsela can stop the rot.

Both individuals are important office holders whose actions are critical to the functioning of the state and our democracy. They serve as lightning rods for public sentiment. But if either were removed from the political equation would the system change? Unlikely.

Economic crime was state policy under apartheid
South Africa has long struggled with a culture of corruption. From the mid-1970s to the early 1990s, the state was waging a war against its people. At the same time it was engaged in systemic economic crime to break international oil and arms embargoes. These practices criminalised the activities of large parts of the public and private sector. This extended from corporations to commercial banks, the military establishment and the South African Reserve Bank. It was a potent mix which enabled economic crime to flourish: a mix of state secrecy, of a monopoly on insider knowledge held by a tightly networked elite and of the uncertain future created by a new regime.

The networks of individuals and institutions behind this were never exposed or investigated. They escaped accountability and watched the Truth and Reconciliation Commission flicker by on a television screen. The new democratic state sought reform through new laws, institutions and self-regulatory measures that promised a panacea for a very deep rooted problem. But, while we live in a fundamentally more open society, many of the problems remain.

Neoliberal outsourcing of state functions creates corrupt spaces
Public procurement has grown massively over the past two decades. The state currently spends approximately R500 billion every year buying services and goods from the private sector. According to the Public Affairs Research Institute (PARI ), government expenditure on procurement now accounts for 42% of the state budget, which is higher than the OECD countries average of 29%.

As public capacity decreases, the need to outsource grows. This creates interaction between the public and private sector that is vulnerable to corruption. It allows a culture of mutual fingerpointing between the state and private contractors when things go ‘wrong’. This is a by-product of the new public management, a Thatcherite outsourcing model of efficiency favoured by public sector reformers in South Africa since the mid-1990s. 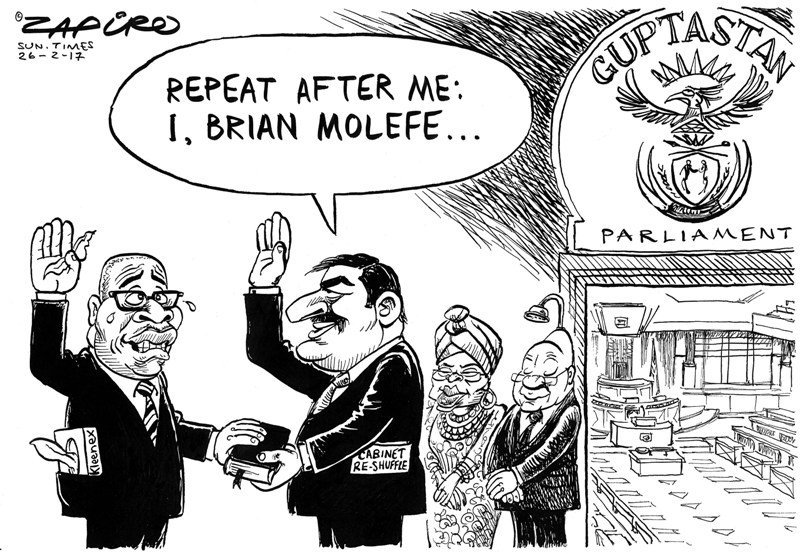 These policies have decentralised public procurement. The apartheid era model of state tender boards was replaced by accounting officers within state institutions. PARI’s Ivor Chipkin argues that there are potentially hundreds of thousands of procurement points across the country and ‘the proliferation of thousands of separate political economies’.

The criminal justicemsystem is undermined
While this model was being implemented, the state anti-corruption institutions began to show the first signs of political interference. The system was already vulnerable to corruption. Now, accountability through law enforcement was being gradually eroded. This had been an important measure of control.

Poor communities suffer
The consequences of corruption in public procurement for communities are disastrous. They result in sub-standard housing, a lack of basic medicine in public sector hospitals, school textbooks that ‘disappear’ and so-called ‘service providers’ who abuse the rights of social grant beneficiaries.

The government’s response is inadequate
The government has finally started to respond to this problem. In 2013 a chief procurement officer was established within the National Treasury. A central supplier database and e-tender portal were created. They require all levels of government to share information. Other recent reforms include the Public Administration Act, introduced in 2014 after many years of foot-dragging. This provides stiff penalties for state officials doing business with the state through a private entity.

At one stage there were tens of thousands of these individuals. The auditor-general said they were ‘moonlighting’. In some instances they were involved in awarding tenders to companies in which they owned shares or held directorships.

However, the act also has significant shortcomings. In particular, it does not provide for a cooling-off period for public officials who leave state employment to join the private sector. This does little to address the practice of ‘javelin-throwing’, where public officials award tenders to corporations and are then rewarded with well-paid jobs in corporations when they leave government. 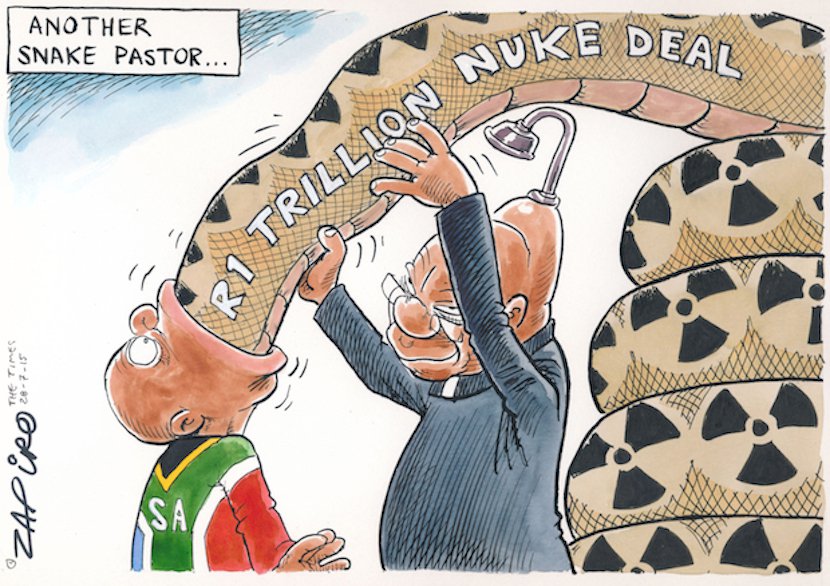 The big money
While most public sector procurement is vulnerable to corruption, none is more so than large strategic procurement. It is protected by a veil of secrecy that uses the language of ‘the national interest’. Remember the R70 billion arms deal? These deals are notoriously difficult to investigate because the trail of corruption leads to high public office and a network of local and international corporations and middlemen with political connections. The failure of the Seriti Commission of Inquiry to investigate corruption in the Arms Deal is proof of this.

Another example is the cartel-like behaviour of large South African and international construction companies, which colluded to fix the price of building the 2010 World Cup stadiums.

All of this suggests that ‘political’ considerations are driving the procurement.

BEE has failed to transform the economy
There can be little doubt that aspects of Black Economic Empowerment (BEE) have been manipulated by elites for narrow gain. This practice has included white business people engaged in fraudulent ‘fronting’ exercises and the rise of a new power elite in business with political connections that can rival some of the wealthiest members of the white ‘establishment’.

This is not to suggest that this wealth was the product of corruption. Rather, it repeated the existing pattern of ownership, this time in the hands of a new power elite. The new crop of paper ‘billionaires’ were heavily reliant on established ‘partners’, many of whom had benefited from apartheid. The overall result is that the existing elite networks have been strengthened by a few new players. Broad-based Black Economic Empowerment has not fundamentally transformed the economy.

Strides have been made, on paper at any rate, to create laws and institutions to tackle corruption. But practices such as narrow BEE have undermined these efforts.

The super-rich are also able to negatively shape public policy by secretly funding political parties. This private funding remains totally unregulated. Politicians promise much but do absolutely nothing to regulate this legalised form of corruption. Private donors keep the party machinery oiled in the run-up to an election. As a result they develop disproportionate influence at the expense of the majority of poor voters.

Private sector corruption is the biggest of all
Much has been said about corrupt public sector officials. But the private sector should equally be held to account for its contribution to corruption. According to the 2014 PricewaterhouseCoopers’ Global Economic Crime Survey, 69% of South African business respondents indicated that they had experienced economic crime. This is nine percentage points higher than in 2011. The report also shows that senior management is now the main perpetrator of economic crimes committed by insiders. Much of this practice has been well documented by the Competition Commission in its investigation into price fixing in sectors such as bread and construction.

No single activity shows better how corruption has been ‘normalised’ within the private sector than the issue of illicit financial flows. According to Global Financial Integrity, over R300 billion left South Africa illegally in 2014. That is over 1,000 Nkandla security upgrades. A network of corporate entities moves money, shields it in tax havens and invests and spends it across the globe. This activity relies on high levels of corporate secrecy and fraud. This is matched by a public sector that cannot properly police these activities because of infighting within anti-corruption agencies or political interference.

None of this should absolve venal leaders who abuse office for private gain. But it does require a far more nuanced understanding of the highly secretive networks that shape our economy and subvert the public interest in favour of criminal profit.

Hennie van Vuuren is an activist, writer, and Director of Open Secrets