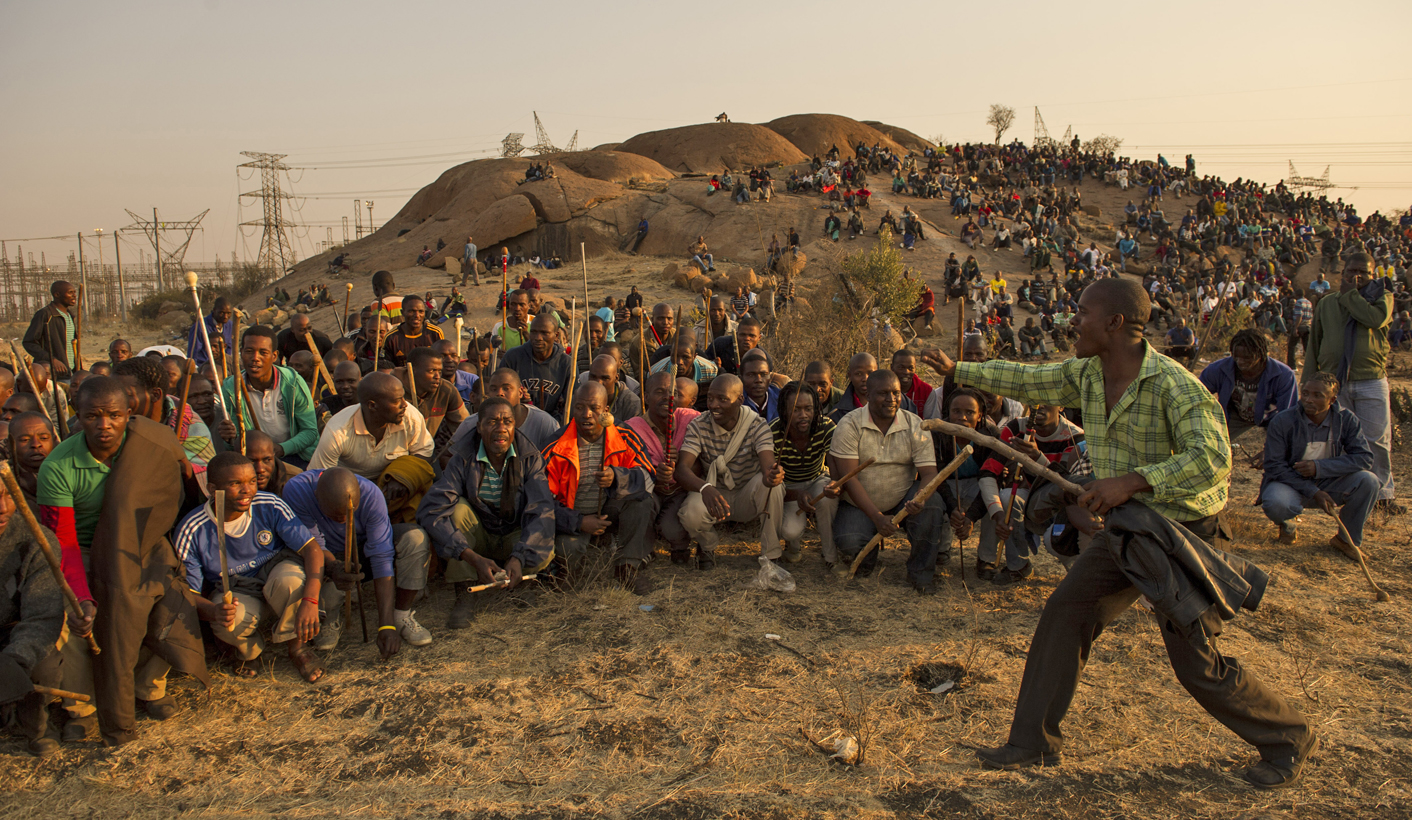 Lonmin employees gather on a hill called Wonderkop at Marikana, outside Rustenburg in the North West Province of South Africa August 15. The miners are calling for the minimum wage to be lifted from its current R4,000 a month to R12,500. The men are mostly Xhosa and Pondo speaking, and the strike was initiated by the drillers. Photograph Greg Marinovich

On 16 August 2013, exactly one year after the Marikana Massacre, 20,000 workers peacefully commemorated that fateful day. Church leaders, political parties, progressives and the workers themselves addressed the crowd – including thousands of workers who sat on the now notorious Marikana mountain. Many of the workers engaged in a deep spiritual reflection the day before, when they re-enacted the strike that took place a year earlier and spent the entire night holding a vigil at the mountain.
At about 3pm on 15 August 2013, 30 workers crouched down as if they were again under attack by the police. This time, however, they were not – and instead of carrying the machetes and spears that they gathered after being shot at last year by their own union, NUM, they now carried small sticks as symbols of their defence and resistance. The workers were attempting to connect to the spirit of the men who died on the mountain. At the centre of the workers’ reflection was a man who has since become an icon of the struggle in Marikana and also a working class hero: Mgcineni Noki, ‘The Man in the Green Blanket,’ or ‘Mambush’ – as the workers affectionately call him. His family recalls that he always made peace at his home in the Eastern Cape when there was a fight, but in August last year he had been pushed into a war with the NUM. 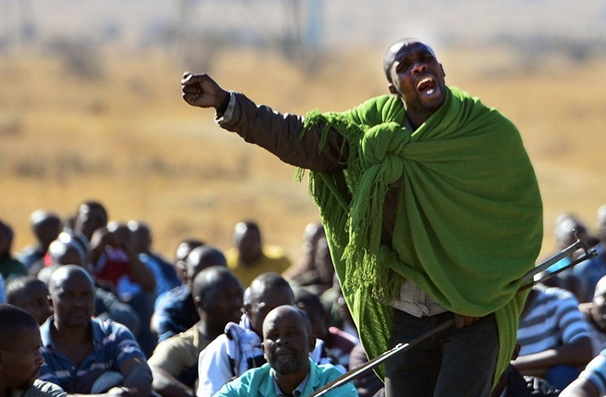 As the workers moved forward, one man stopped and pronounced, ‘We are here to remember the men who died here’. The workers then began to sing the songs that they developed during the strike at Marikana last year. In essence reliving the strike days following the massacre, the workers sang: ‘The police are scared because they have killed Mambush’. When the song ended, another worker came forward and told the workers about a recurring dream in which Mambush would ask him: ‘Have you got what we have been fighting for [the R12 500]?’ The worker responded, ‘No we didn’t’. Then Mambush took some soil, threw it into the air and vanished.
For many of the workers, and for those who believe in the organic power of the working class, the mountain in Marikana is both a place of hope and despair. It is a place of despair because 34 workers were killed there by the police. It is a place of hope because the workers showed the world that when people stand up, organise and fight for what they believe in, radical changes become possible in our lives and in the lives of others. Last year, the workers in Marikana removed the negotiating table from the bosses’ and elites’ comfort zone and placed it at the foot of the mountain of the working class.
Many of the leaders of the strike have now become leaders of the new union called the Association of Mineworkers and Construction Union (AMCU). As one of the workers reflects, ‘I am a proud member of AMCU… but they do not take on our struggles’. AMCU has been represented as a militant union – however, the militancy lies in its members rather than its national leadership. The independent committees in the Rustenburg platinum belt that were led by the likes of Mambush and others witnessed, perhaps understandably, a sharp decline after the 2012 strikes ended. Workers believed that they needed a formal structure to engage the bosses around their demands and they chose AMCU because they viewed it as a sympathetic union.
AMCU’s dominance in the Rustenburg platinum belt must be understood as being the result of the independent working class organisations that were created in 2012. It is therefore ironic that AMCU’s national leadership is bent on destroying the same organisations that brought it into power. While Joseph Mathunjwa, the President of AMCU, listened to and sought to assist the workers on the mountain on 16 August last year, he now holds a tight grip around the potential activity of these same workers. In fact, following the supposed vision of AMCU constituting an apolitical union that deals solely with so-called ‘labour issues,’ he has crushed a recently formed Lonmin Workers’ Council in Marikana which sought to link community and workplace struggles. Furthermore, he has labelled those who seek to rebuild strike committees in Amplats as criminal elements and has ostracised leaders who meet separately from AMCU’s structures in order to create political alliances that could contribute to a real socialist alternative. What is clear is that unions – including AMCU – cannot exist without workers and it is only the workers’ themselves who can effectively take on their own struggles. In other words, trade unions cannot substitute the independent working class power that peaked in the platinum belt last year. It is left to AMCU members and other political formations to redirect AMCU’s politics.

As we commemorate the lives of Mambush and others that have fallen in the struggle for a better life, we must be reminded of where our power against the bosses exists. It exists when workers and communities unite and fight on their own terms as they did on the mountain – not within the formal bargaining structures or elite legal frameworks that determine when people can or cannot strike or protest and also what and how much they are allowed to demand. Without this, the living wage of R12,500 will remain a dream that will never be fulfilled.