Arising from the February Climate Jobs meeting when it was reported that the Water Minister was intending to cut back on the provision of free basic water in order to save money, Thabo Lusithi, from the Environmental Monitoring Group (EMG), was invited to detail the implications, both legal and practical, of this serious threat and what was and could be done to challenge the Minister.

The World Health Organisation defines water supply as one of the basic human rights. Access to clean water limits the spread of diseases. Besides water supply is important for poverty alleviation because it frees especially women from carrying water long distances. Although in South Africa the right to water is constitutionalised, the actual terms and conditions of water supply are defined in 1997 Water Service Act.

It guarantees every household at least 6000l of free basic water a month, assuming a household size of 8 people. Broken down into daily water allocations that means 25l per person per day – a randomly determined amount. The water is supposed to be available either in people´s house or on a standpipe not more than 200m away. Free basic water is neither enough for small businesses like a food garden, a saloon or a carwash, nor for cultural uses like baptisms. In fact it is not even sufficient for basic needs like cooking, washing and personal hygiene. 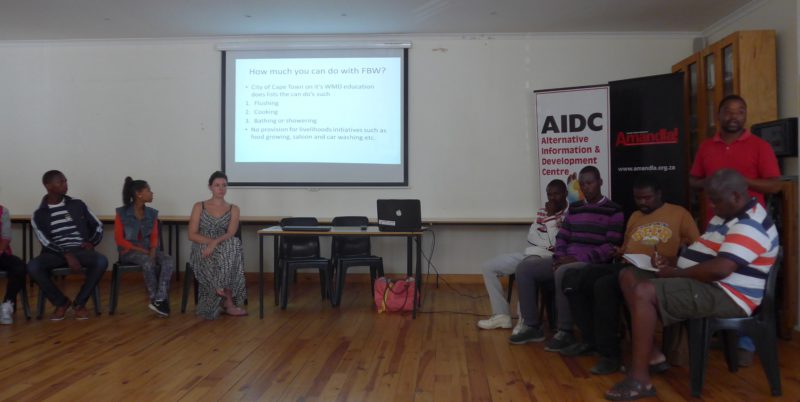 The delivery of Free Basic Water has never been free of injustice. In the 2000s prepaid water meters were installed especially in poor households. Just those who could afford a token got more than the Free Basic Water a day. This approach caused a lot of protest. Installers were chased away, the meters were bypassed… Nowadays the tool to deprive people from their right to free basic water is the so called Water Management Device, a limited water meter, which cuts households off after a previously determined flow-through. Too often the device leaves the households without any water.

The current drought forces everyone of us to safe water. For the municipality the costs of provision increase, because the remaining water in Cape Town´s dams needs more treatment to be made germ free. Saving costs of provision is the starting point of the recent review of the Free Basic Water Policy. The City of Cape Town looks on taking away the Free Basic Water from those who can afford to pay. Apart from question of which households pass as indigent, the procedure is against the constitution. It guarantees a progressive realisation of constitutional rights –such as the right to water.

EMG tried to get hold of Department of Water and Sanitation officials in the regional and national authority in order to get the rationales from their perspective. So far there has not been a satisfying response.

After a 11-year-old girl was brutally raped and murdered in Mitchell´s Plain, there was a protest march organised prior to the courtcase against the murderers.

Sometimes it is very difficult for activists to respond to climate change immediately when the issues of crime, domestic violence or substance abuse are much more part of their everyday life.

Khayelitsha is still facing forced installments of water management devices. The community takes action by chasing the installers away. People are invited to link up with the Cape Town Water Caucus and the next meeting will be on the 20th of April 2017.

PHMSA members have requested a Climate Jobs workshop. Date and time are still to be confirmed.

An activist from Nyanga pointed out, that the local gardening project needs coaching and fertilizer. MCJ has been invited to come along with the Woodstock Peace Garden Community Project. The possibility of converting the centre into an efficient renewable site should be explored. Field visits need to take place in mid- April 2017.

From the 23rd to 25th March the Water Justice Conference took place at the St.George´s Cathedral. It was part of a larger international event organised by the Trinity Institute New York. The different venues in the Cathedrals of New York, London, Melbourne and Cape Town were interconnected by means of livestreaming.

What came out after three days of sermons, talks and group discussions was, that faith organisation can make a difference when it comes to injustice of sanitation and water supply. People are listening to their religious leader, therefore the leaders should take responsibility in educating their congregation.

The Water Justice Conference issued two statements on water justice and the Cape Flats Aquifer and sent them to the Western Cape Premier and the Mayor of Cape Town.

Lucia gave us a brief insight, how far she has already got with her new film project. She collected suggestions for improvement.

After Robert Andrews´ input on backyard agriculture using waste water at the OMCJ Meeting in January, the idea to built hydroponic growbeds in AIDC´s backyard for demonstration purposes rised. Anna is now working on collecting information and raising funds to help the project to come into being.

Jeff reported, that climate change was not mentioned a single time in Pravin Gordhan´s budget speech. That´s a reason tob e concerned, as the budget speech indicates the government´s priorities. The urgent matter of climate change apparently does not belong to them.

In Pretoria a strike of coal-transporting companies took place. The workers fear that renewable energy threatens their jobs. NUM released a press statement arguing that ESKOM cannot be used to promote people who want to destroy jobs.

The fact, that the transition to renewable energy causes job losses in sectors related to conventional power production is true, but the way it is put in the media statement is twisted. It is highly alarming that the working class is used by big business to promote their interest in continuing with climate-wrecking methods.

Date and topic of the next meeting are still to be determined. More information is going to be send out soon.