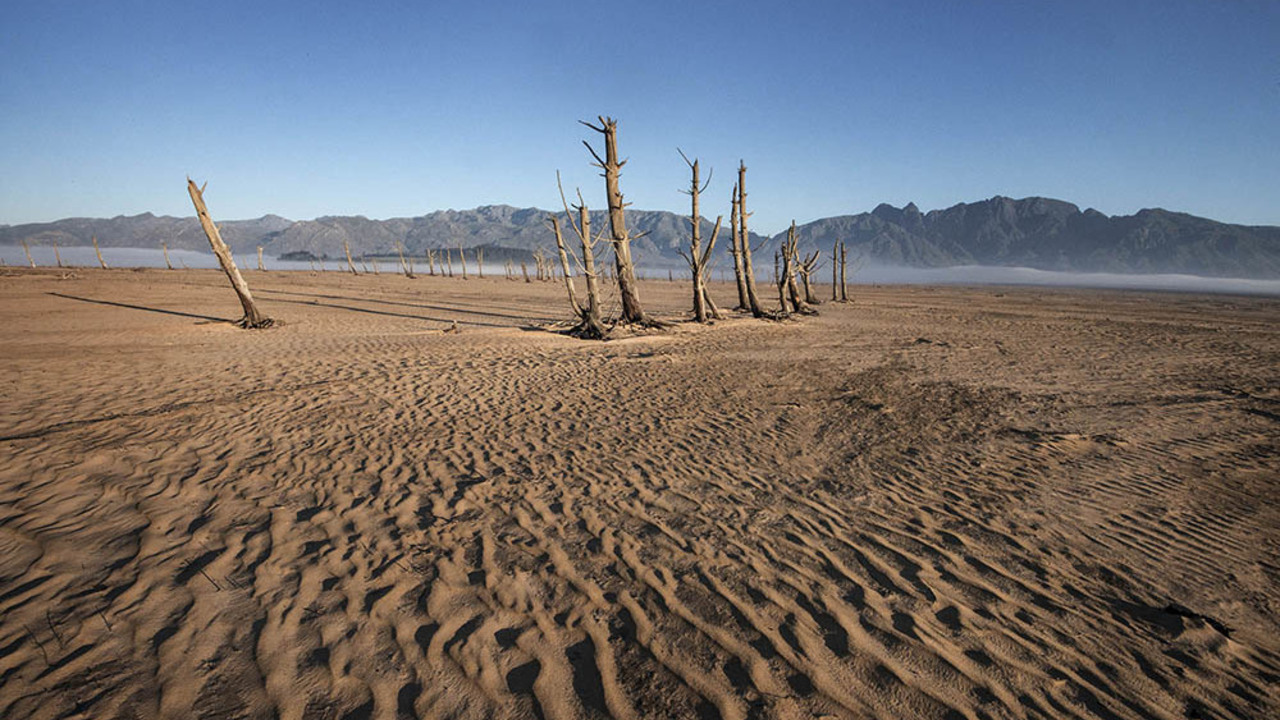 We take a raincoat when the forecast is rain.  But, when the forecast is recurring floods, droughts, hurricanes, heat waves, food insecurity, epidemics and climate-induced mass migrations and related conflicts… we do nothing.  The real tragedy of the already traumatising Cape Town drought is our dismal failure to confront the realities of people-made, climate change.  This occurs even when the real-time presence of climate change is occasionally acknowledged.  Worse still, this is not a prediction about lessons that will not be learnt.  We know enough to know the enormity of what we already haven’t learnt. (Cape Town’s 7th March announcement that the dreaded Day Zero will not happen this year is, crucially, conditional on both the arrival of expected winter rains, as well as the continuing enforcement of the severe drought restrictions.  The analysis offered below is not disturbed by this announcement.)

Those of us living in Cape Town are likely to believe that we are the first and only South Africans to have had to face the nightmarish prospect of waterless taps.  We forget the disastrous drought that hit KwaZulu-Natal in 2015, followed by a not dissimilar drought that struck many parts of Gauteng.  And we forget that the Northern Cape and many parts of the Eastern Cape, including its major cities, are, like us, in the tight grip of droughts; droughts that aren’t supposed to be happening with such frequency and duration.

The Government does little to correct these perceptions.  To be sure, it builds on them.  It is far happier leaving us believing that droughts are temporary, naturally-occurring events that are sometimes caused by something with an unpronounceable name:  El-Niño (or is it La Niña?).

The Government publicly – if unintentionally – affirms that it has no intention of learning the big lessons.  Its February Budget stastement alerts us to this alarming fact.  Instead of the required huge increase in water infrastructure projects (and jobs), we are getting huge cuts in infrastructure expenditure; rather than measures to prevent droughts, the Budget offers drought ‘relief’.

The Government’s action is at once astonishing and utterly predictable.  Ignoring what is happening in Cape Town and elsewhere is simply astonishing.  It is predictable because it is so in keeping with the established pattern of ignoring the warnings foretelling the drought.  Despite politicians from all three spheres of government blaming the unpredictability of a once in every 300 or 1000 year event and, when not blaming each other, blaming Cape Town’s domestic water users, and while others attribute the drought to divine revenge, they cannot claim ignorance.

The Department of Water Affairs, the Western Cape provincial government and the City of Cape Town co-hosted the UN World Water Day at the Cape Town International Convention Centre in March 2011.  They were thus all together in the same venue to hear the warnings from the government’s own science council, the Council for Scientific and Industrial Research (CSIR), about the climate change threat to the Western Cape’s water resources.

Other warnings about ‘the western parts of the country’ and Cape Town in particular go back to at least 2001.` Two reports from 2002 warn of dangerous water scarcity in Cape Town.  The Department of Water Affairs’ (DWA) Western Cape Water Supply System (WCWSS) Reconciliation Strategy of 2007 was especially noteworthy.  It listed 20 options ranging from new dams and groundwater sources to water reuse and desalination.   In March 2009, the WCWSS noted that the Berg River scheme solved the problem until 2013 ‘after which additional resources will have to be implemented and/or developed.’  This 2009 report further noted several options for implementation by 2019 or earlier.  In 2012, the National Water Department urged the municipality to implement 10 augmentation steps to ensure water supply by 2015.  Even the National Development Plan of 2012 got onto the act.  With specific reference to the Western Cape, it mandated ‘water-reuse and groundwater projects, which are to be completed by 2017’ [p.187].

Climate change – or, more accurately, the (effective) denial of climate change – explains why all these numerous and varied requirements and warnings were ignored.

The Voëlvlei Augmentation Scheme provides a more detailed six-year history of this pattern of denail.  The Scheme calls for the surplus winter rain that flows into the Berg River to be pumped into the Voëlvlei Dam for emergency use.  Voëlvlei, the 3rd largest of Cape Town’s 6 dams, was one of three interventions identified in 2011 for implementation by 2019.  However, good winter rains in 2014, together with Cape Town’s water conservation and demand management efforts, put back the date when extra water would be needed to 2022; a date subsequently extended to 2024.  Nonetheless, the Department of Water Affairs’ Strategy Steering Committee (SSC), consisting of representatives from all 3 government spheres in the Western Cape, agreed that a definitive decision regarding the various feasibility studies by both the Department and the City of Cape Town had to be made by October 2015, at the latest.  At this 2015 meeting, the City rejected the Voëlvlei Scheme because of the cost.  Xanthea Limberg, the City’s mayoral committee member for infrastructure, explained the thinking behind this now much regretted – and enormously more costly – decision:

It is not practical to ring-fence billions of rand for the possibility of a drought that might not come to pass.

‘A drought that might not come to pass’ – said not in 2015 or even 2016 but, almost unbelievably, last year – exposes thinking unpenetrated by climate change.  In this world, droughts are natural events that occur very occasionally and last for short periods.  ‘The rains will come, if not today, then tomorrow or at the latest the next day’ is the mantra of this anachronistically pre-climate change thinking.

Denying climate change was described some years ago as humankind’s ‘long suicide’; the protracted death of a species we still flatteringly call homo sapiens.

The clever people advising the politicians on Cape Town’s water, in 2014, expressly ruled out climate change from their predictions.  Being generous, it might be said that this was before Cape Town’s supposedly once-in-every-several-hundred-year-drought. With the benefit of hindsight, most people presumably now accept the fact of the drought.  However, this doesn’t mean they accept any significant connection between the drought and climate change.  Professor James Hanson, a former Director of the NASA Goddard Institute for Space studies in the US and globally recognised as a leading climatologist, addressed this very point, even though his focus was US heatwaves rather than Cape Town’s drought.  In a 2012 Washington Post article entitled, ‘Climate Change Is Here And Worse Than We Thought’, he noted:

The Financial Times, however, is having nothing of this.  A recent cover story on Cape Town’s drought – ‘The Day When Taps Run Dry’ – is telling.  Despite its near 4000-word length, climate change is not mentioned at all; and this in a major article published as recently as 22 February this year.  Instead, it offers geographical location as the sole cause of the drought: it is our misfortune, according to the FT, to find ourselves physically located in that part of the world that unavoidably makes us a water-scarce country.  And that’s it; there’s nothing that can be done other than adapt to the bad hand dealt us by nature.

Perhaps it is not surprising for a financial journal to ensure that climate change does not impede the business of money-making for the already privileged.

This protection of the class interests of the rich and would-be rich lies behind many of the other unlearnt lessons of Cape Town’s water woes.  They include:

The present point is that coal and water do not mix well when water is scarce, for the whole process of burning coal to produce electricity is enormously water-intensive.  Eskom’s coal-fired power stations alone use 327 billion litres of fresh water, amounting to a staggering 10,000 litres of water per second.  If Cape Town’s taps are turned off, the daily amount of water for each of its 4 million inhabitants will be 25 litres.  This means that the water Eskom uses every day is equivalent to what 3,456,000 Cape Townians would use, assuming all of them were able to collect their daily allowance.

Amongst these additional problems are….

Without water, there would be virtually no manufacturing.  As with agriculture, the logic of the drought impels a just transition to a socially rational and just removing of the profit maximising imperative that currently determines what gets manufactured and in what quantities.  Such determinations are effectively left to the biggest investors and their managerial hired guns.  One of the lessons of the drought is that this decision-making monopoly needs effective democratisation.

Climate change is the first inadequately recognised lesson of the drought.  Climate change is, moreover, the first ever phenomenon that not only affects – or will affect – everyone worldwide but, indeed, threatens the very survival of our species.  In other words, we ought to take it seriously.  Certainly, no less seriously than war.  No self-respecting nation would ever be expected to surrender because it couldn’t afford the war.  Yet, affordability has been the constant measure used in justifying all the delays detailed above that have brought Cape Town to its present prospect of closedown.

Cape Town’s drought, recently elevated to being a national disaster, ought to compel us to heed the warning of Neil Armitage, who heads UCT’s Urban Water Management research unit:

No one cares about water until it’s not there

Acknowledging climate change ought to be a no brainer.  The enormously difficult next step is to act on it.  The governments of the world (apart from the current US one) readily accept climate change’s threat to humanity; they’ve been doing so annually since 1994.  The trouble is their paralysis beyond talk in a world in which all (voluntarily or otherwise) bow before giant corporations and multinational investors.

Failure to act on the connections between South Africa’s droughts and climate change is a tragedy of unlearnt lessons.  Compounding the tragedy is insufficiently recognised very good news:  Climate change is made by people.  This allows people to unmake what people have made.  Unfortunately, we know enough to know that undoing climate change requires much more than just recycling our household rubbish or showering instead of bathing.  The challenge is for each one of us – the generation of the Big Drought – to give the lie to

I know, but I don’t want to know that I know, so I don’t know